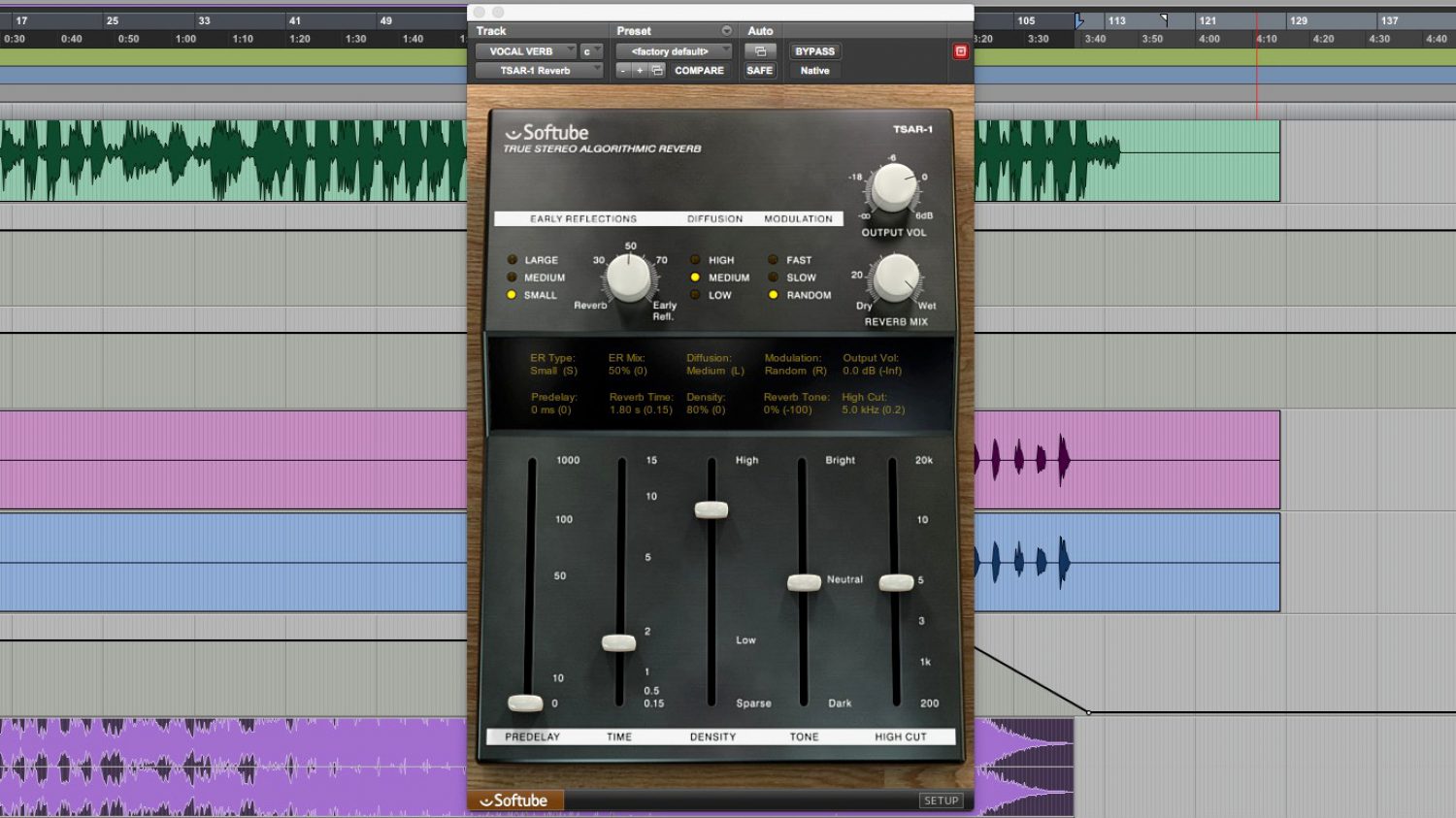 Softube has built quite a name for itself as one of the most well-respected plug-in developers out there, and for good reason. The company is known for its awesome emulations of classic hardware like the Summit Audio Grand Channel, but it also builds new creations. Like, for example, the Softube TSAR-1 reverb.

The Softube TSAR-1 reverb has been out for a few years, but that doesn’t mean it’s any less relevant. In celebration of Softube’s new Volume 1 bundle, we took the Softube TSAR-1 for a spin.

Like many of Softube’s other plug-ins, the TSAR-1 reverb looks a lot like a piece of hardware, help giving it a certain charm, especially for the old-school engineers out there that may be a little resistant to moving over to plug-ins. Towards the top of the plug-in, you’ll get options for switching to “small,” “medium,” or “large” verbs, as well as control over the verb’s early reflections. Beside that, you’ll be able to tweak the diffusion and modulation, as well as the overall output of the verb and the wet/dry levels.

The bottom half of the plug-in gives you even more controls, allowing you to tweak the predelay, reverb time, density, tone, and high cut.

In general, the verb is pretty simple, although at first glance you might not be aware that you can tweak some of the settings — that’s because they’re presented as LED lights rather than a knob or fader, like the rest of the controls. We can’t help but think that a knob might have been a better option here.

Of course, none of this really matters if the plug-in doesn’t sound good, but thankfully it does. The plug-in uses four audio engines to crossfeed stereo signals between left and right channels — which is similar to how reverb works in the real world, albeit simplified a little.

That’s kind of the point of the reverb though — simplification. The plug-in sacrifices the customizability that you might find in other, more complicated reverbs — like the Rop Papen RP-Verb — but the trade-off is that it’s much easier to use. In this case, we think that’s a good thing.

Along with that simplicity comes the fact that the plug-in only uses one algorithm. That’s to say, the different halls, chambers, and rooms are all based on the same sound, just tweaked a little to achieve the desired verb.

Most of the reverb is constructed around tweaking the tail of your verb, however, as mentioned, you get some control over the early reflections too. Those are then mixed for your verb, and when that happens the verb sounds quite good. As you might expect from a reverb of this nature, the reverbs all have the TSAR-1 “sound,” but it’s not a bad sound, by any means.

If you’re a seasoned pro looking for a reverb that can be tweaked for hours on end, this probably isn’t the verb for you. Even seasoned pros, however, will appreciate the simplicity and great sound that is the Softube TSAR-1.

You can get the Softube TSAR-1 for yourself as part of Softube’s Volume 1, or check out the links below to buy it standalone.