Compressors all have their own sonic flavor. If you’re looking for a smooth, transparent sound look to an LA2A style. We went over the Best Free LA2A Compressor Plugins previously. Another of the most well-known compressors is the 1176. It’s a FET compressor, which is a type of transistor. These types of compressors have faster time constants than others, with greater preservation of the transient material. This makes them great on sources like drums and vocals, but really they sound good on anything. If you’re looking for a compressor that won’t color your signal, look elsewhere. FETs are very vibey and offer a lot of mojo due to their use of transformers. This is one of the things that makes them appealing. So if you’re looking for a great freeware 1176 plugin, let’s dive into five of the best! 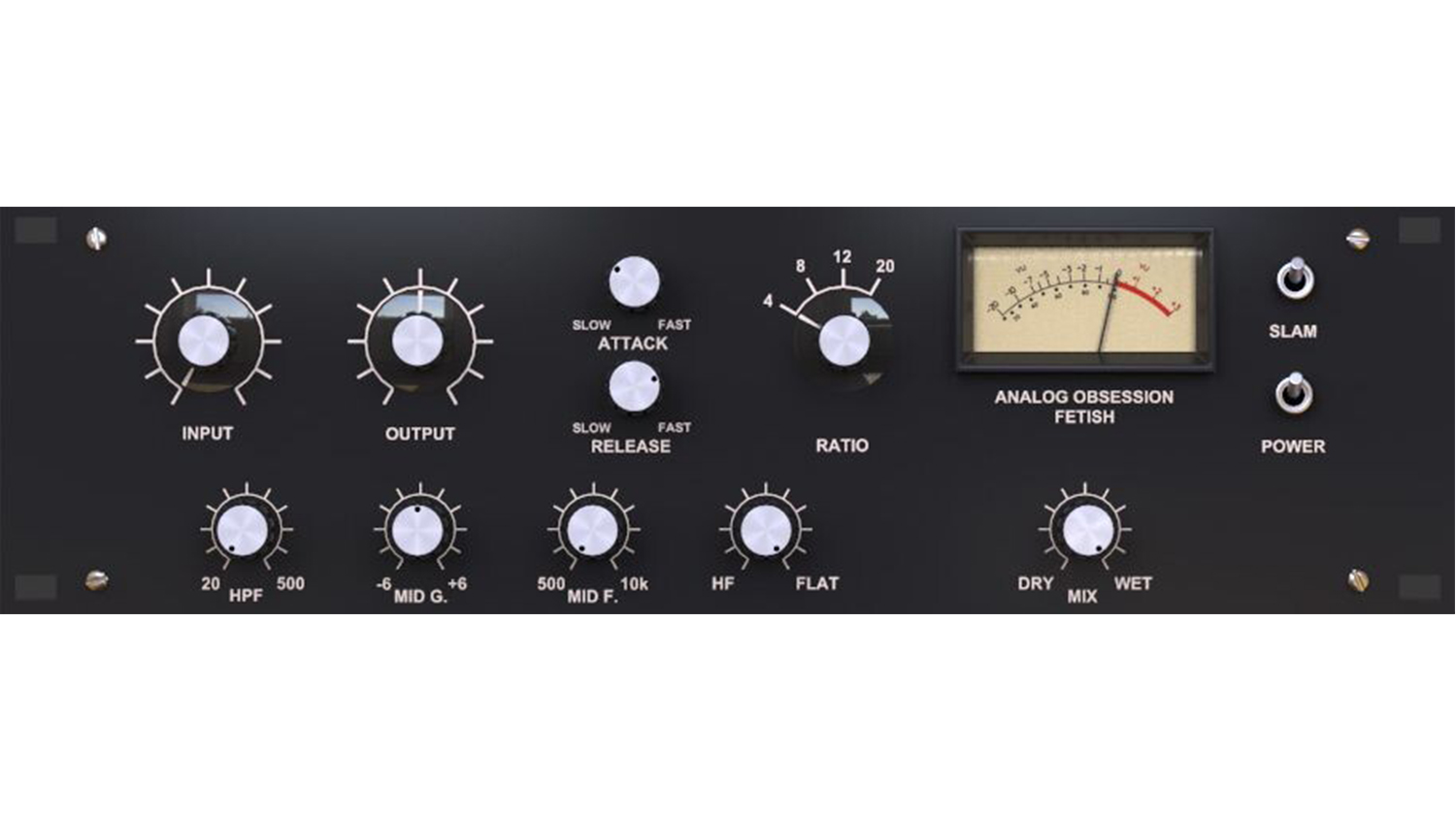 This is far and away the best free 1176 plugin around. Analog Obsession has a suite of free plugins, all of them are top-notch. Fetish is one compressor in a pack of three, all based around a FET topology. It’s called the FET Bundle and it includes the Fetish, FetDrive, and FetSnap. The input circuit of Fetish has up to 60dB of gain and the output can do 30dB either way. Time constant controls operate just like a true 1176 with reversed action. Attack goes from 20-800ms, and Release from 50ms-1.1s. Ratio works a little differently than you might be accustomed to. You have four options – 4:1, 8:1, 12:1, and 20:1. Each has its own unique curve and range of compression. This means that lower ratios compress faster than higher ratios, and work in tandem with the input level to achieve compression.

Equalization includes a high-pass filter ranging from 20Hz-500Hz and a MID from 500Hz-10kHz and a gain that can attenuate or boost by 6dB. High frequency works a little differently to compress this range of the spectrum. And unlike many 1176 style plugins that aim to be 1:1 with the original circuit, there is a blend control, so you can do parallel compression without having to set up extra routing. Original 1176 units don’t have a ratio knob, they use a button system. “All buttons in” is a popular technique to make the compression really aggressive. While Fetish doesn’t have the button set up the way the original does, it does have a Slam button that simulates this useful technique. Use it to add intense drive and saturation.

And as for what’s going on behind the scenes is an advanced DSP circuit, and up to 4x oversampling. Plugin formats supported are VST/3 and AU. It runs on Windows systems, but it also supports Mac OS for Catalina and Big Sur flavors. 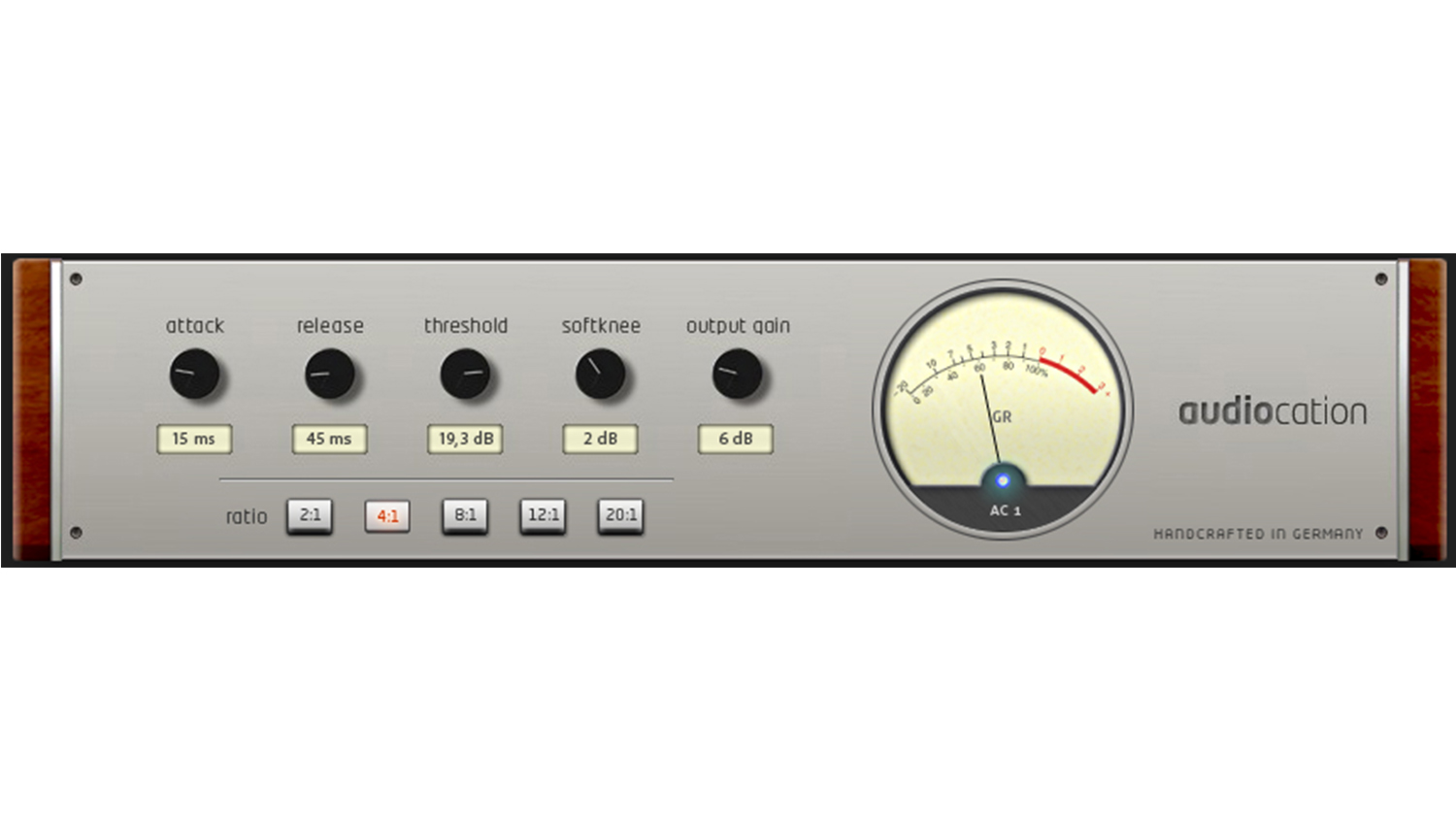 Another fantastic free 1176 plugin is the AC1. Based on a FET topology, it offers some additional features not found in the traditional 1176 design. While it lacks an input control, it does have controls for attack/release, threshold, knee, and output gain. Ratio is set via buttons with five options starting at 2:1 and going all the way up to 20:1. There is an input transformer simulation that adds some color and character to the signal. It’s also designed to be lightweight, freeing up processing power. The interface is clean and easy to navigate as well. However, like many freeware plugins, it is only available for Windows in VST. 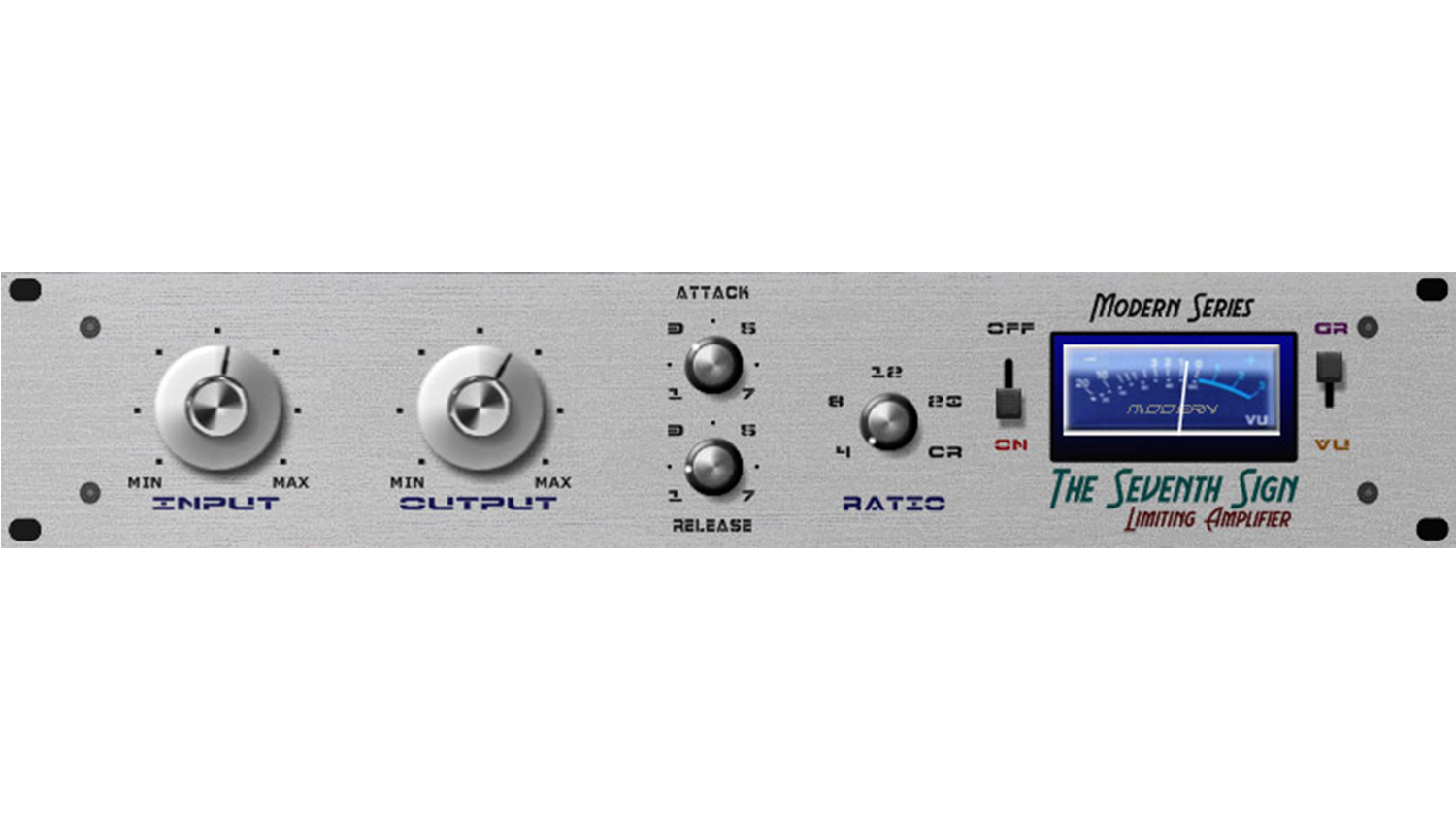 Antress was among the first company to create free hardware compressor emulations. The Seventh Sign is their take on the 1176. If you’re familiar with the layout of the 1176 itself you’ll have no issue dialing this one in. It’s got input, output (up to 40dB), attack (.03ms-10ms), release (50ms-2s), and ratio controls. Threshold is relative to the input level. Meaning the more you increase the input, the more compression you’ll get. Unlike the original unit’s button system Seventh Sign sports a stepped rotary knob with five settings. It offers 4:1, 8:1, 12:1, 20:1, and “Crush”. Crush simulates the popular “all-buttons-in” setting, also known as Nuke.

It’s a slick little freebie that is a bit older, but still worth a try for the more adventurous. For freeware it’s got an impressive GUI that resembles the original 1176 pretty closely. Being that it is older it is only available for Windows in 32-bit VST format. 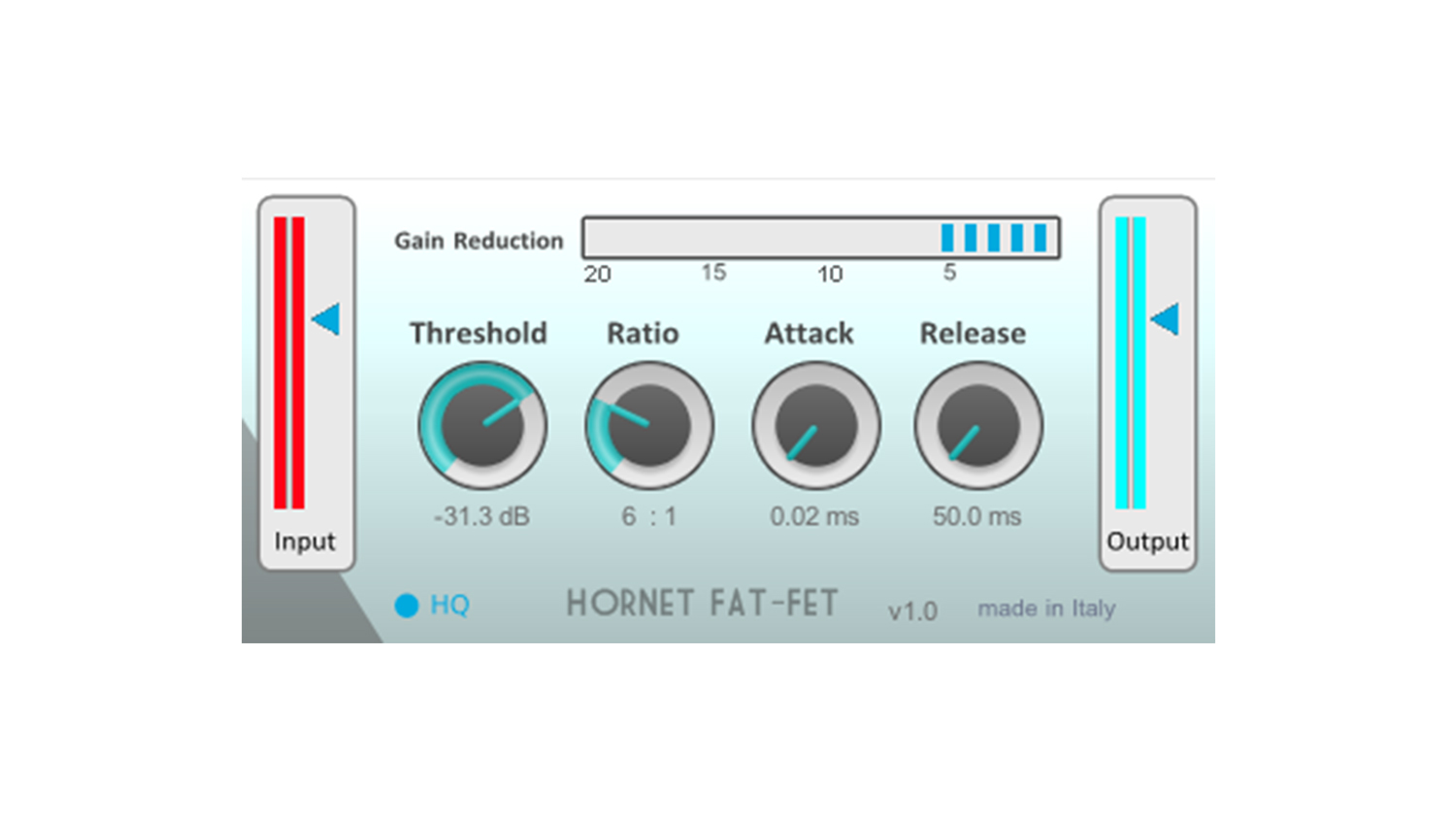 FAT-FET isn’t exactly a 1:1 1176 plugin, but it does model the same dynamic structure. It is most closely related to perhaps the most esoteric and popular of all 1176 models – the Blue Stripe. It has some additional features 1176 compressors don’t have, like fully adjustable threshold and sweepable ratio. Attack times are really fast, going down to an insane .02ms with release times as fast as 50ms. The algorithm behind FAT-FET operates the same as Hornet’s Multicomp and Multicomp Plus models.

The difference really comes in the sidechain of the signal. This allows for a more aggressive sound just like the Blue Stripe 1176 compared to the regular model. The interface is slick and simple and looks great. Metering provides an accurate perspective of what’s going on with the input and output stages as well as how much gain reduction is happening. And if you need to take things to the next level there is an oversampling mode. It’s easy on CPU and supports Windows and Mac 64/32-bit systems and comes in VST and AU formats. 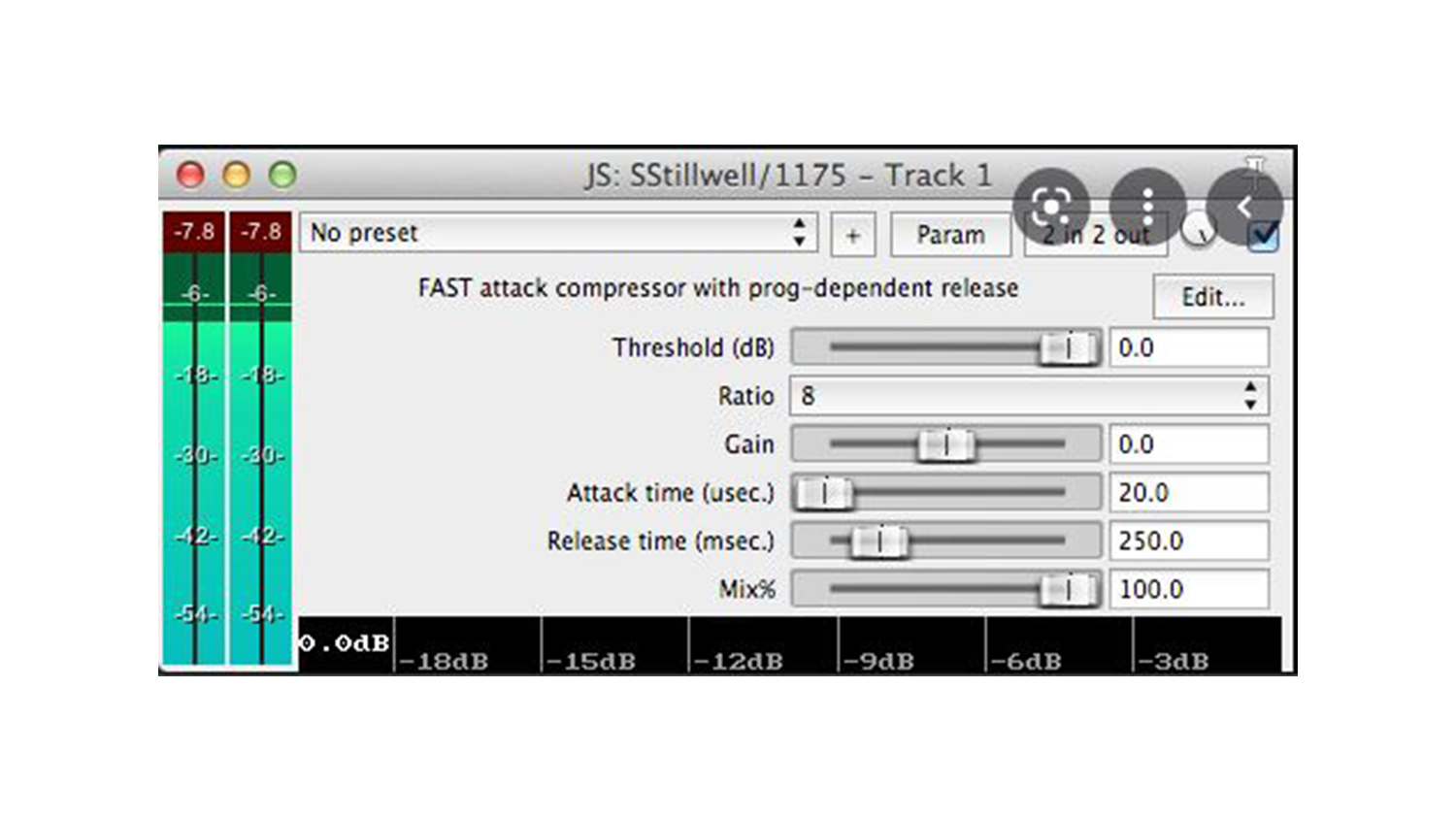 The rawest free 1176 plugin comes with Reaper, a cult-favorite DAW that has gained a lot of notoriety over the past decade. It’s even made its way into many professional studios. It comes with a robust suite of free plugins. And while they aren’t much to look at, they sound pretty damn good. ReaComp is a great compressor, but it also features a lesser known option built in JavaScript called SStillwell/1175 – and no, that’s not a typo!

It has a fast attack with a program-dependent release, though there is a release control. Speaking of, parameters are controlled via horizontal sliders. Included are attack/release, threshold, and mix. Ratio is fixed with the four familiar options of 4:1, 8:1, 12:1, and 20:1. There is no “all-buttons-in” setting, but that’s not a deal-breaker. Side-by-side metering presents input and output gain levels. There is no dedicated gain reduction meter, but it’s not hard to do the math on the differential between them. You can’t download it independently, so you’ll have to get the entire Reaper suite. Not a bad thing – there are plenty of gems in there!

Best free LA2A compressor plugins: Get that classic sound without paying a penny