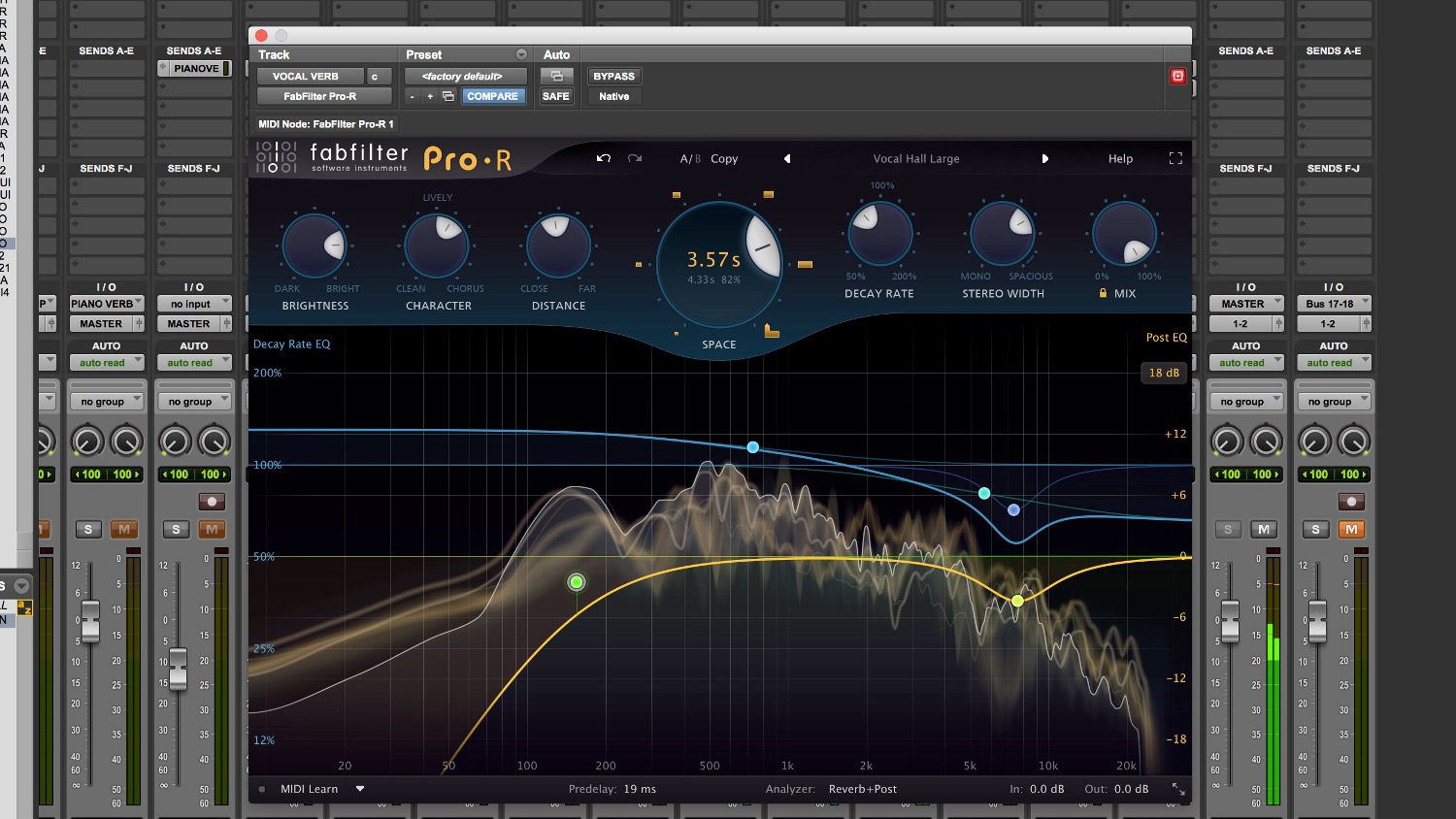 The humble reverb has come a long way over the years, and for good reason — it’s an essential part of any good mix. Of course, because of that there’s no shortage of great reverb plugins, but that doesn’t mean there isn’t room for one more. FabFilter has just added its new plugin to the mix — the FabFilter Pro-R.

If you happen to buy the FabFilter Pro-R, however, you’ll quickly notice that it’s not just another reverb plugin. In fact, the Pro-R could be the best of the bunch.

FabFilter has never been one to shy away from excellent design, and the results have generally always been absolutely stunning. The Pro-MB multi-band compressor made multiband compression simple thanks to its stellar interface, and the new Pro-R takes many of the same design cues that have been used on great FabFilter plugins over the years, applying them to the reverb.

The majority of the plugin window is taken up by a waveform analysis section, which gives you control over two different frequency curves — a decay rate EQ, and a post EQ. We’ll talk a little more about what that means later on, but for now we can tell you one thing — the waveform analysis section is beautifully done, and the dancing frequencies almost encapsulates what reverb would look like if it could be seen. Sure, that may not really affect the sound of the plugin, but we think a visual component to sound is always helpful, especially for those still learning how to use reverb. Not only that, but beautiful design has always made something more enjoyable to use — beautiful cars are the icing on the cake of a powerful motor, and the beautifully designed iPhone makes the iOS experience even better.

At the top of the plugin window, you’ll find all your controls — although you may not even need them given the huge number of presets at your disposal. First up is the Brightness knob, which goes from “dark” to “bright” and changes the overall timbre of the reverb. Then you’ll find the Character knob, which changes the level of chorus in the verb. Next up is Distance, which changes how far away from the source the reverb is — close to far. The fourth knob is Space, which changes the overall size of the reverb space. Fifth is Decay Rate, which changes how quickly the reverb decays in the space. The second to last knob is Stereo Width, and it gives you control over how wide the reverb is, from mono to “spacious.” Last but not least is Mix, which as you might expect, lets you control how much verb there is compared to the original source noise. If you use the verb as an aux plugin, you’ll want to keep this at 100%, while if you use it in a chain of effects for an instrument you’ll want to use it at different levels.

In general, the FabFilter Pro-R looks amazing, not to mention easy to use. That ease-of-use, however, doesn’t mean it’s not versatile — it is. Extremely so.

Design is an important aspect of any plugin, but perhaps more important is how the plugin sounds. Thankfully, it sounds incredible.

One of the great things about the Pro-R is that it comes with a ton of presets, so if you don’t want to mess around with controls or you’re just doing a quick and dirty test mix for something, there are plenty of presets at your disposal.

If you do want to mess around with the reverb, however, thankfully there’s plenty to mess around with. Interestingly enough — though not surprising considering FabFilter’s other plugins — the plugin puts a heavy emphasis on EQ. As mentioned, you’ll get two frequency curves to control — a decay rate EQ and a post EQ.

First up, the post-EQ. The post EQ basically shapes the overall sound coming out of the plugin — or the plugin’s output, if you will. That eliminates the need to insert an EQ plugin after your reverb, and it’s actually based on the super popular and amazingly powerful Pro-Q.

The decay rate EQ is a little different. As the name suggests, it basically gives you control over the decay of the reverb, and you can add up to 6 bands — which is much more than the simple high and low-pass filters available on most verb plugins.

The FabFilter Pro-R is not only extremely easy to use, but it sounds incredible too. It may not have all the bells and whistles that other reverbs offer, but it keeps the ones you’ll need on the day-to-day, and gets rid of the controls that you may never touch. If you’re looking for an excellent reverb that can be applied to any situation, this is your best bet.