Mini amp heads are a practical way to add half stack sound to your setup while saving on space. They pack in every bit of tone, and many of the features, of their big brothers. One of the best things about them is that most of them are really affordable. Like, under $300 affordable!

How many guitar players have gear lusted over adding something like a Friedman, Bogner, or Soldano to their backline but had to give up the dream because of cost, space, or volume concerns? Let’s dig in to some of the best mini amp heads. You can stop putting off that dream amp purchase now. 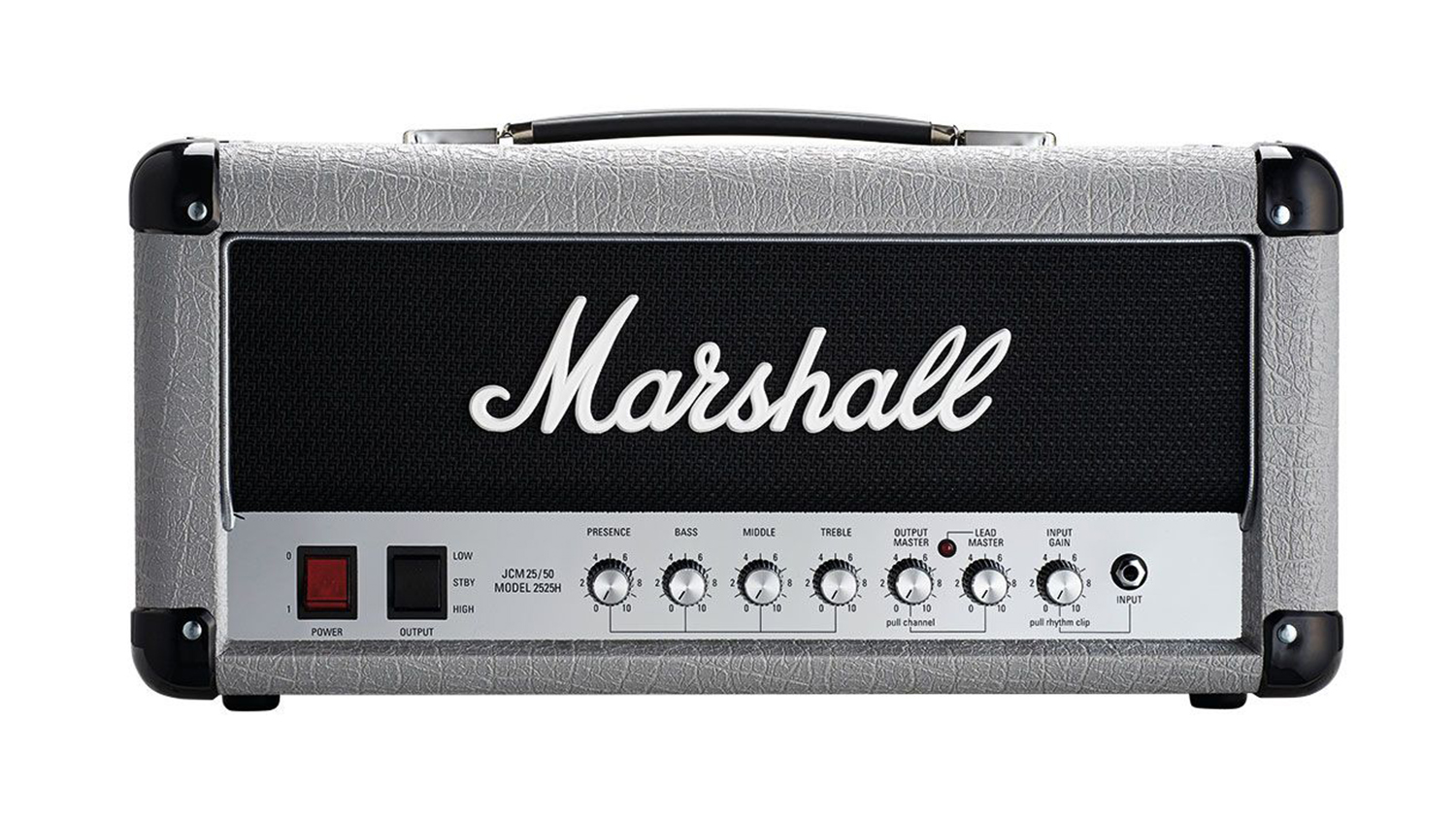 Best mini amp head overall
Marshall 2525H Mini Silver Jubilee
Marshall’s famous 25th anniversary amp can now be played at bedroom levels. The output can be scaled down to 5W and it can run speakers at different impedance levels.
Pros
One of Marshall’s most famous sounds in a smaller package
Can be played at 20W or 5W
Can run speakers at 4,8, or 16ohms
Cons
As expensive as the large head
Buy From
musician’s friendguitar centerreverbsam ashamazon

Marshall created the Silver Jubilee to celebrate their 25th anniversary in 1987. It’s found favor with some very notable names in the guitar world, including Slash, John Frusciante, and Joe Bonamassa. It had all of the midrange warmth Marshall amps are known for, but it had something special about it.

There was a certain sparkle to the top end that a lot of other Marshall models didn’t have. Oh…and they’re loud. Even for a Marshall. So if you want all of the 25th anniversary tonal charm in an amp that won’t blow holes in your walls or drive your band mates deaf then this 20 watt mini amp head is for you.

It’s powered by three 12AX7 tubes in the preamp and two EL34s in the power amp section. Running full blast at 20 watts, it can be switched down to just 5W if you need even more attenuation without sacrificing tone. Dialing it in gives you input and lead gain as well as output master knobs. For EQ you have Marshalls tried-and-true four band setup of presence, bass, middle, and treble.

When connecting to an external speaker you have three impedance options – 4, 8, and 16. There are some nice additional features like onboard FX loop and direct out. It comes with a foot switch. It might be small, but it has all of the mighty tone that caught such fervent favor in the original Silver Jubilee amps. 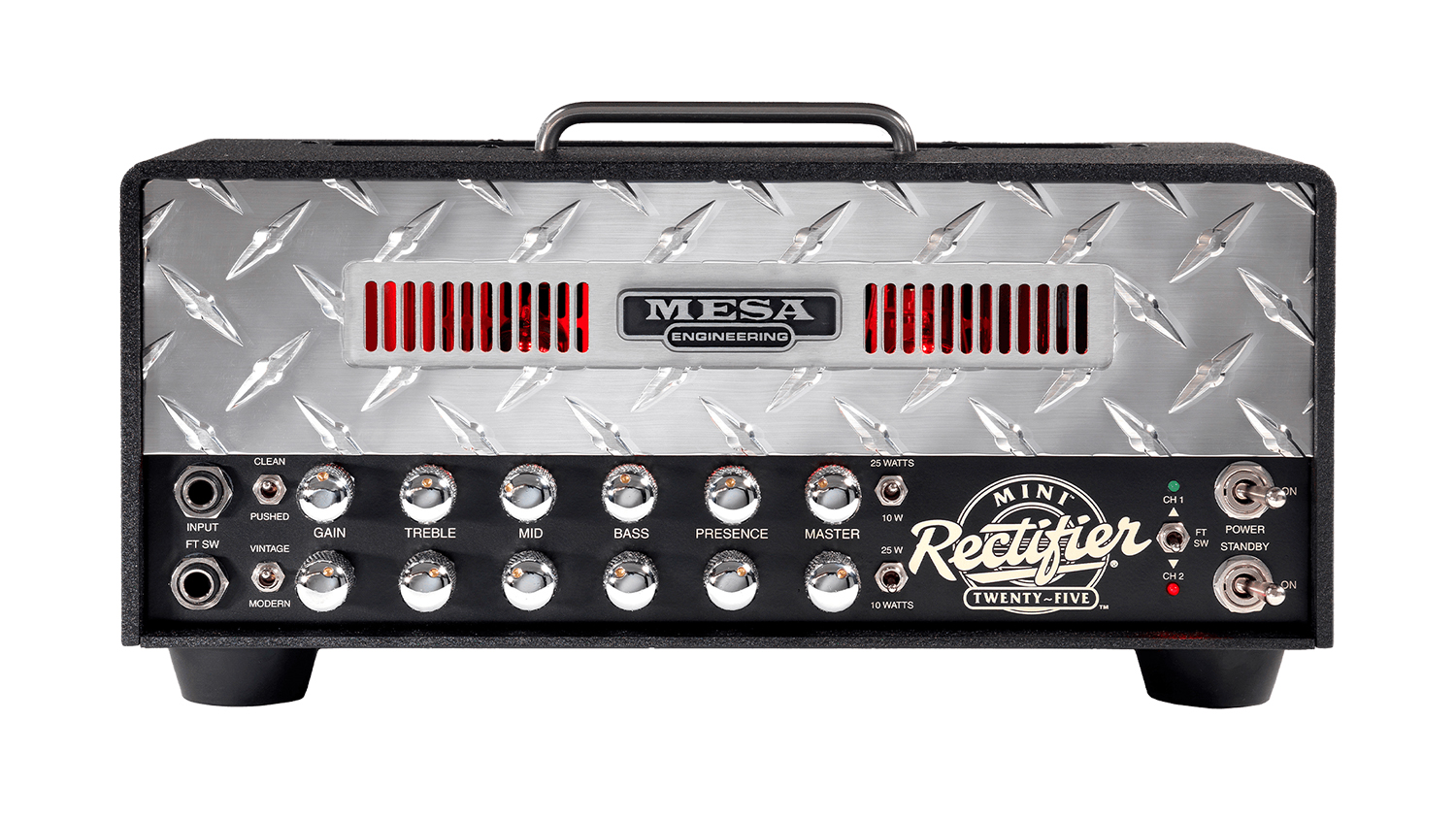 The Rectifier series is just as important today as it was when it was released. For decades they have been one of the go-to high gain amps on stages and studios around the world. If you want the sweet Rectifier tube tone in a smaller package then this model is for you.

Five 12AX7 tubes run the preamp, and dual EL84 tubes power the output section. Four modes across two channels give you every type of tone you could want, going from crystal clean to aggressive, vintage to modern, and of course the traditional Rectifier.

Each channel offers two styles (clean/pushed on channel 1 and vintage/modern on channel 2), so you have options when setting up your switching. Unlike many other mini amps it has two channels and the sophisticated control section you’ve come to expect. Each channel has gain, 4-band EQ, and master controls. Each channel can be switched between 25 and 10 watts.

As far as the output section things get a little simpler. There is a buffered series effects loop and 8ohm and 4ohm speaker outputs. It’s got the classic brushed metal faceplate and looks just like the familiar Rectifier aesthetic. For that bad Boogie tone in a smaller format it’s perfect. But it will cost you just as much. Worth it! 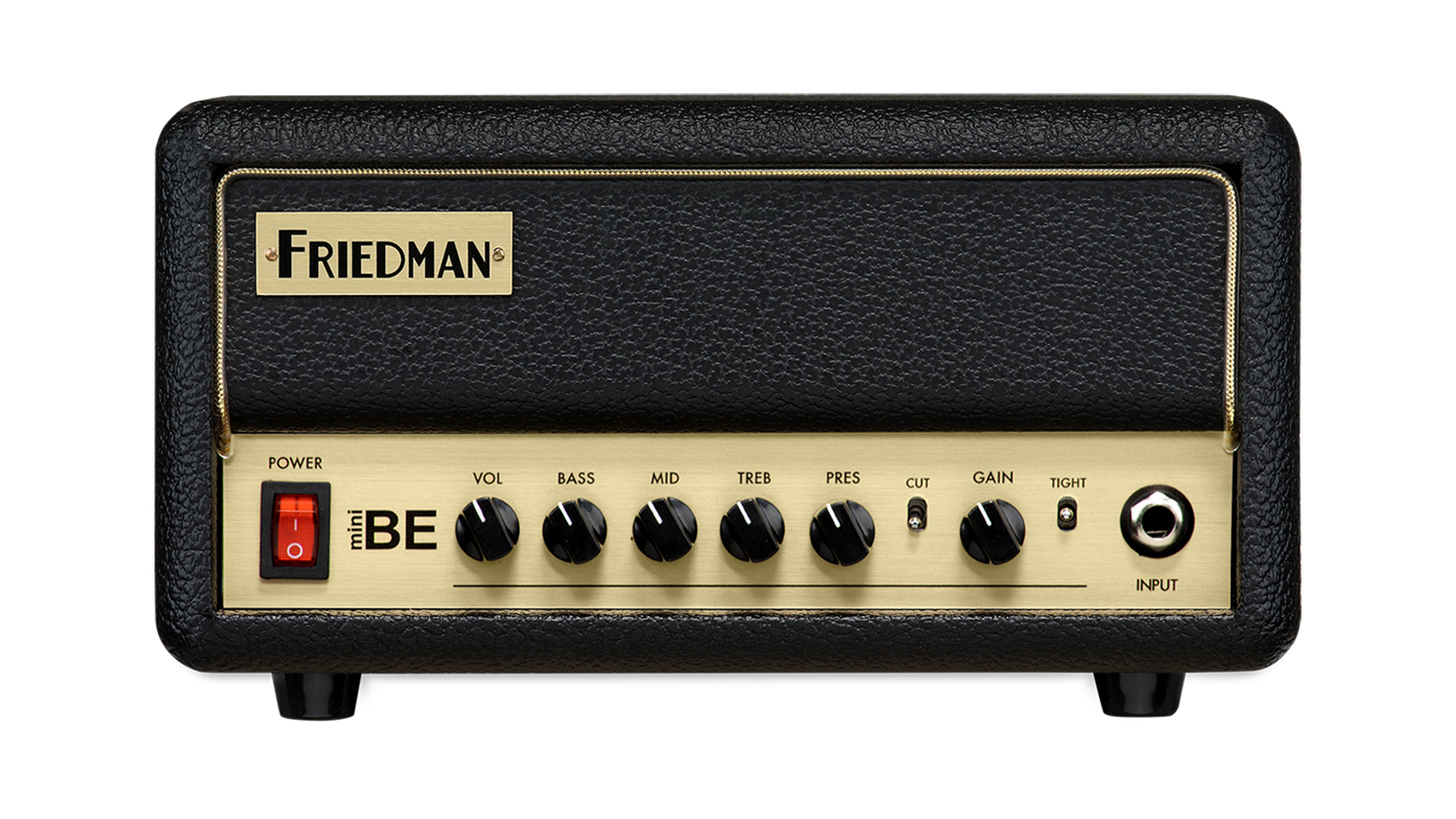 Best boutique mini amp head
Friedman BE-MINI
Get boutique Friedman tone in a lunchbox amp. The controls are fairly simple, but you can augment your base sound with tight and cut switches.
Pros
BE-100 tone in a small format
Great midrange
Cut and tight controls
FX loop and dual speaker outputs
Cons
Might be too much gain for some styles
Buy From
musician’s friendguitar centerreverbsam ashamazon

Friedman has come on the scene in recent years as a boutique Marshall-style amp. But they are so much more than that. Perhaps their most popular model is the BE-100. With all of the midrange British roar you’d expect it quickly caught on as being more than just another boutique amp.

The BE-MINI is a small format, 30W version that might cut out a few features, but doesn’t skimp on sound. It’s a simple control set with input gain, 4-band EQ, and output volume. Two switches toggle Cut and Tight controls sculpt your sound further. On the backside there is a series effects loop and dual speaker outputs.

Bring the coveted Friedman sound into your world with this sleek and sexy boutique mini amp head. 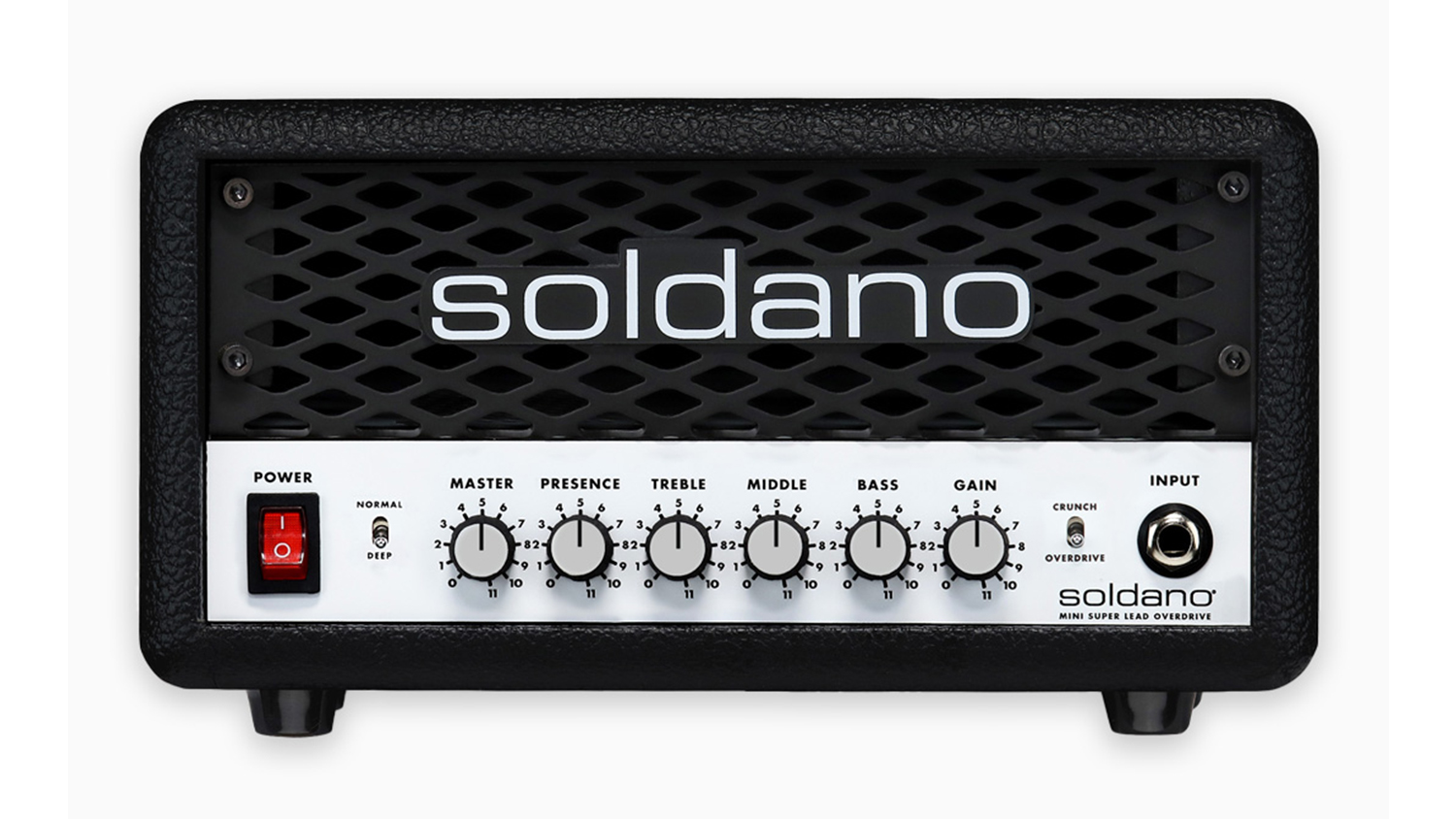 The SLO100 has been a top choice for rock and metal musicians since it came out in the late 80s. It’s a little bit of everything. Warmth without the mud, cut with clarity, and heavy while being articulate. And the sustain! Now you can put this beast into your amp arsenal with the 30W SLO Mini.

There’s nothing crazy here. It’s a simple layout with gain, 4-band EQ, and master volume. Two switches let you add in more low end and/or more gain. It’s got an effects loop and 8 or 16ohm outputs for driving speaker cabinets.

It might not offer much by way of features, because the sound speaks for itself. There’s nothing like a Soldano SLO. And this mini amp head version is an affordable and practical way to add one into your setup. 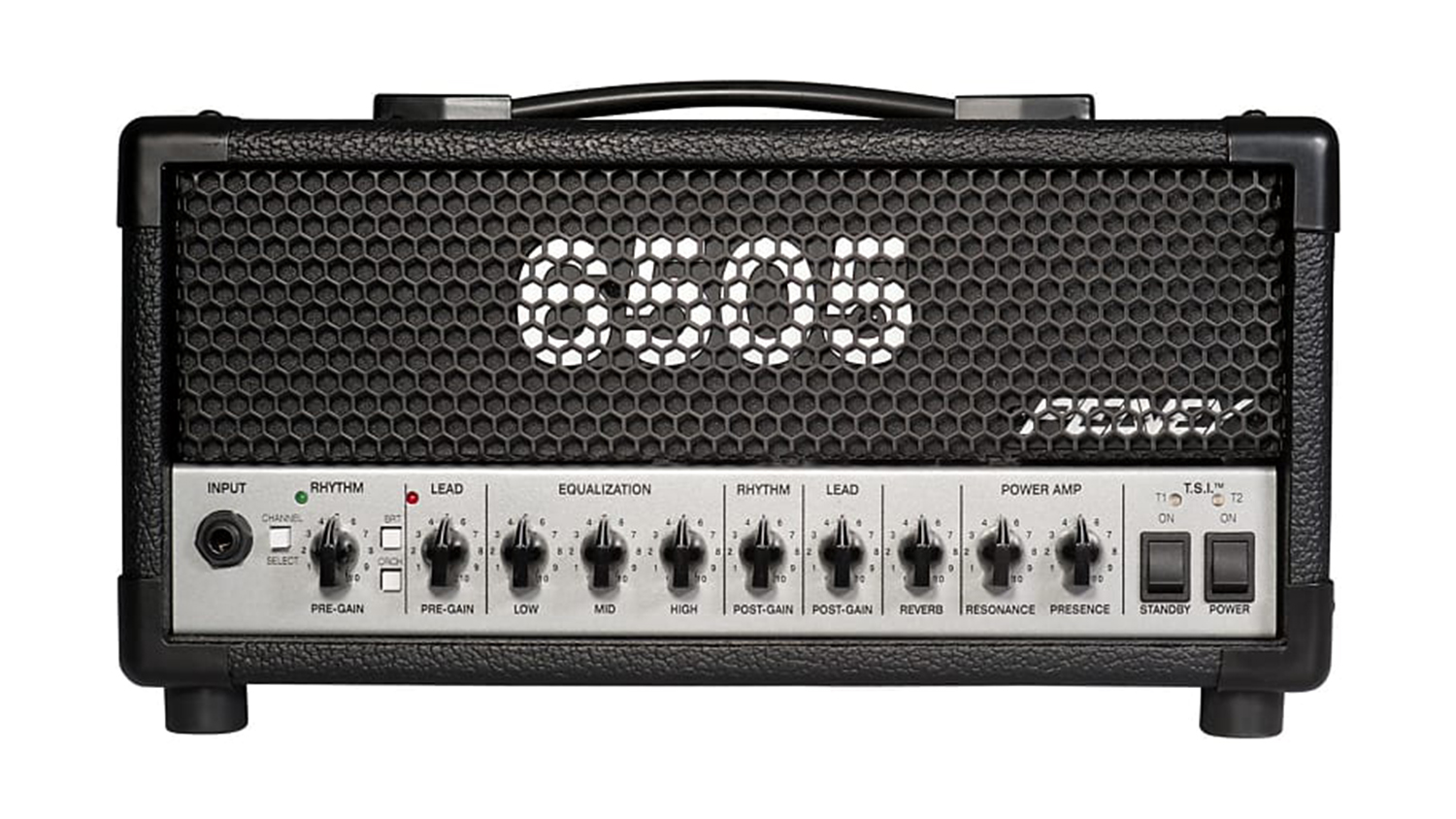 Best mini amp head for high gain
Peavey 6505 MH Micro
The Peavey 6505 is a go-to for high gain sounds. Get all of these glorious gained out tones in a small head that offers multiple ways to sculpt your sound.
Pros
Two channels with same gain/voicing structure as larger head
FX loop and reverb
USB and XLR direct outs
Cons
Might have too much gain for some players
Not focused on cleans
Buy From
musician’s friendguitar centerreverbsam ashamazon

Thanks in small part to Eddie Van Halen, Peavey’s 5150 started to dominate the high gain amp market. As the 5150 evolved into the 6505 that hasn’t changed.

It’s based on a three 12AX7 tubes in the preamp and dual EL84s in the power amp. The two channels have the same gain and voicing structures as the full-size version. Both share a 3-band EQ, reverb, and effects loop. And via the footswitch channels, additional gain, fx loop, and reverb can all be turned on/off.

A unique feature is the Tube Status Indicator that gives you a constant readout of power tube health. There are some other features you won’t find in other mini amp heads like a USB recording output, headphone out, speaker defeat switch for going direct, and Peavey’s proprietary MSDI (XLR) output. An impedance switch lets you use it with 8 or 16ohm cabinets.

There are certainly other options in high gain mini amp heads, but if you want the distinct 6505 sound you couldn’t have a better option.

Are mini amplifiers any good?

Absolutely! Mini amp heads offer all of the great tone of their larger namesakes in a compact format that’s lower volume and easier to transport.

What are mini amps used for?

Everything that a full-size amp is used for. Guitar players like them because they’re lower volume and have a smaller footprint. A lot of people like them for recording because it’s easier to control their volume. But they’re great for live shows and rehearsal as well.

What is a lunchbox head?

The term “lunchbox” head refers to small, or mini, amp heads. They’re scaled-down versions of the larger versions. Much smaller, it’s easier to move them. And with reduced volume you can get the same tone at a much lower SPL.

Another huge release from NAMM is Peaveys new Vypyr VIP series of amps. But here’s the catch. These amps can handle electric guitar, acoustic guitar AND bass. All in one...

Marshall Amplification is legendary in the guitar world. These are some of the best Marshall style pedals available today.

As a part of NAMM 2019, Marshall stopped the show in its tracks by its release of a new Studio Series of amplifiers which give an old sound a new look.

Mini amps for guitar have come a long way in recent years. Let's take a look at the features and benefits of seven of the best!