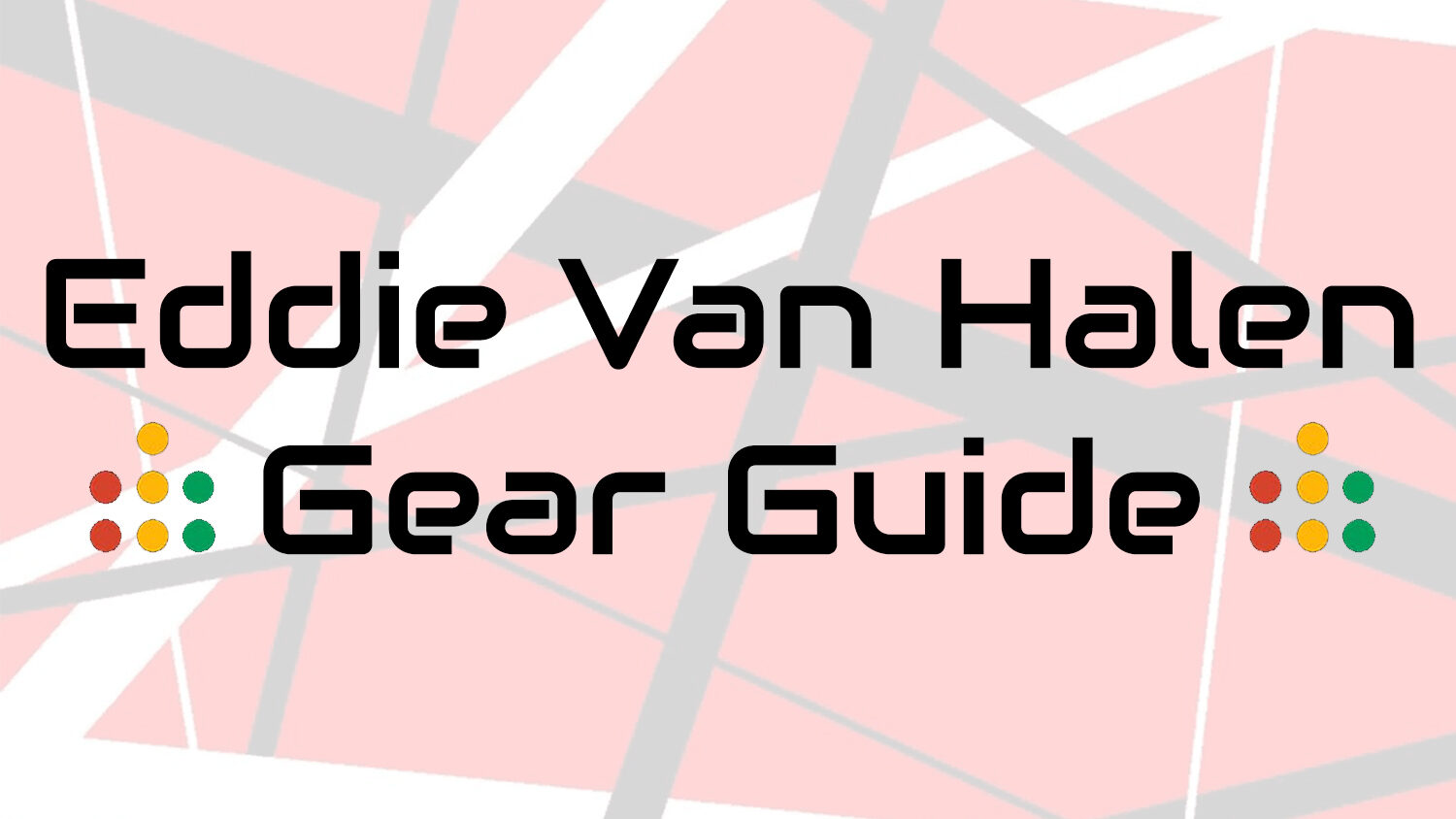 Even though I grew up in the 90s, from the beginning of my interest in the guitar to making it into a professional career, Eddie Van Halen has been a golden god to me. It might be an overstatement – and it’s definitely a cliché – but he made me want to pick up a guitar.

Everybody is aware of his technical prowess, but I feel like his songwriting and arranging skills were his best asset. How else would Van Halen have endured such massive success, despite all of the drama going on behind the scenes? His style was novel and full of energy, and still amazes people decades later.

The the band’s first era with David Lee Roth fronting until 1984 (the album and the year) is widely considered to be the band’s golden age. But they did the seemingly impossible and established a second wind with powerhouse vocalist Sammy Hagar from the mid-80s through the early 90s.

The fact that Eddie is a total gearhead has never been a secret. His “brown sound” tone is now synonymous with the warm, midrange roar of the homemade guitar he cobbled together himself, a little processing, and vintage Marshall amplifiers with matching (Tolex stripped) speaker cabinets.

This is by no means an exhaustive list. Being the sonic tinkerer that he is, his rig changed many times over the years, but the core ideas behind it really didn’t. In this Eddie Van Halen gear guide, let’s look into some of the magic, mystery, and mojo behind his early “brown sound” and some of the tools he used to revolutionize rock guitar. 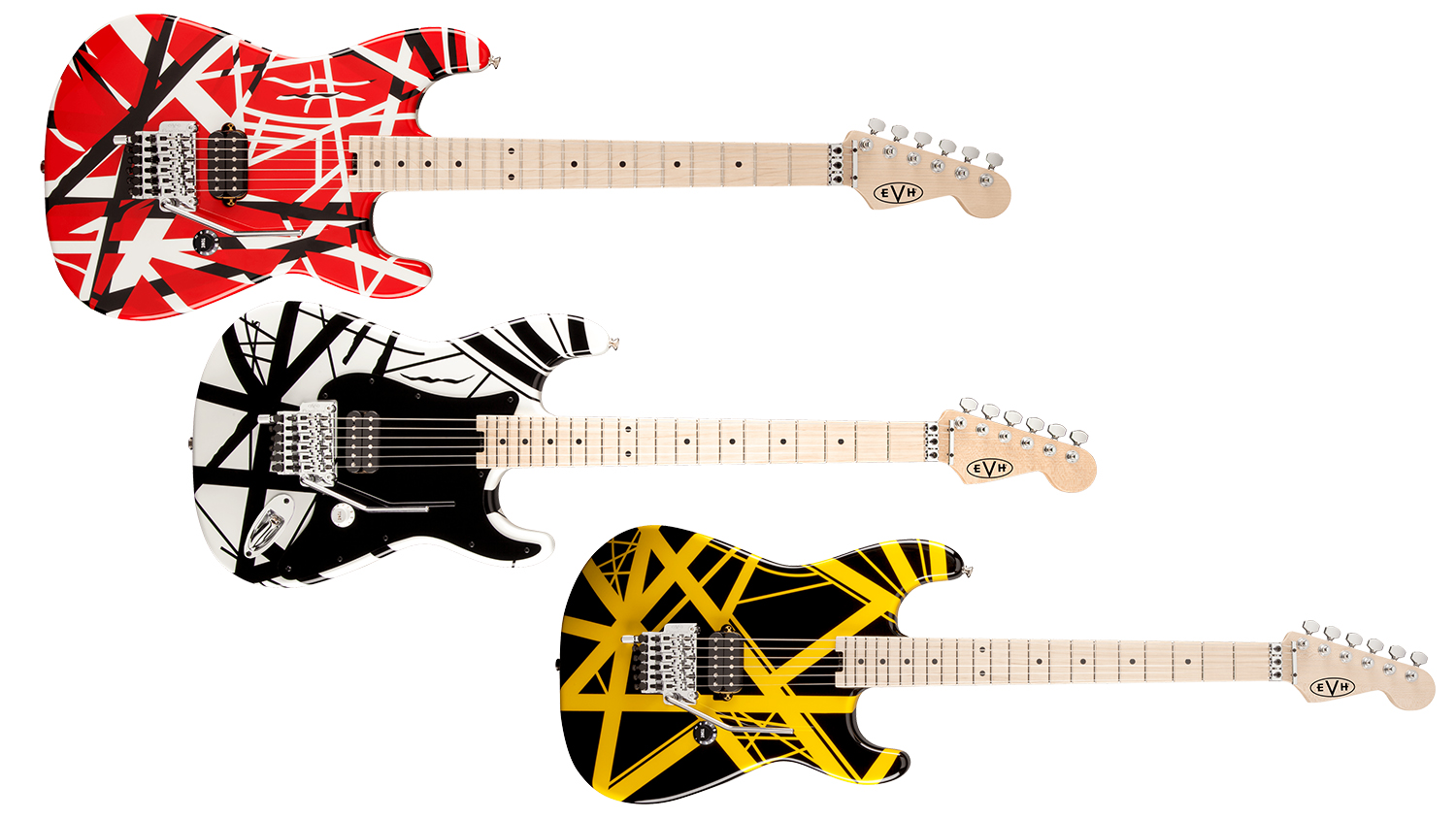 Infamous doesn’t begin to describe Eddie’s piecework homemade guitar. Combining the best elements from Fender and Gibson models, its inception launched a wave of guitar mods that are still just as relevant today as they were decades ago. “Super Strat” style guitars have since become quite common, but in the 1970s this was a brand new idea.

The combined elements of the ash body, two-piece maple neck from the birds-eye species, minimalist electronics, and Eddie’s personal touch turned this unique creation into a tone monster. He put a Gibson PAF pickup and in the bridge – the only [working] pickup Frankenstein would sport. He stripped the electronics to the bare essentials, with only a single volume control. The neck was unfinished maple, as Eddie preferred that feel. But perhaps the most identifiable element was the custom striped paint job that has now become synonymous with his aesthetic.

There were certainly other guitars that are associated with Eddie, including his Wolfgang (originally manufactured by Peavey, now under the EVH brand), but Frankenstein is by far the most identifiable. It is one of the most iconic and important guitars in the history of music. 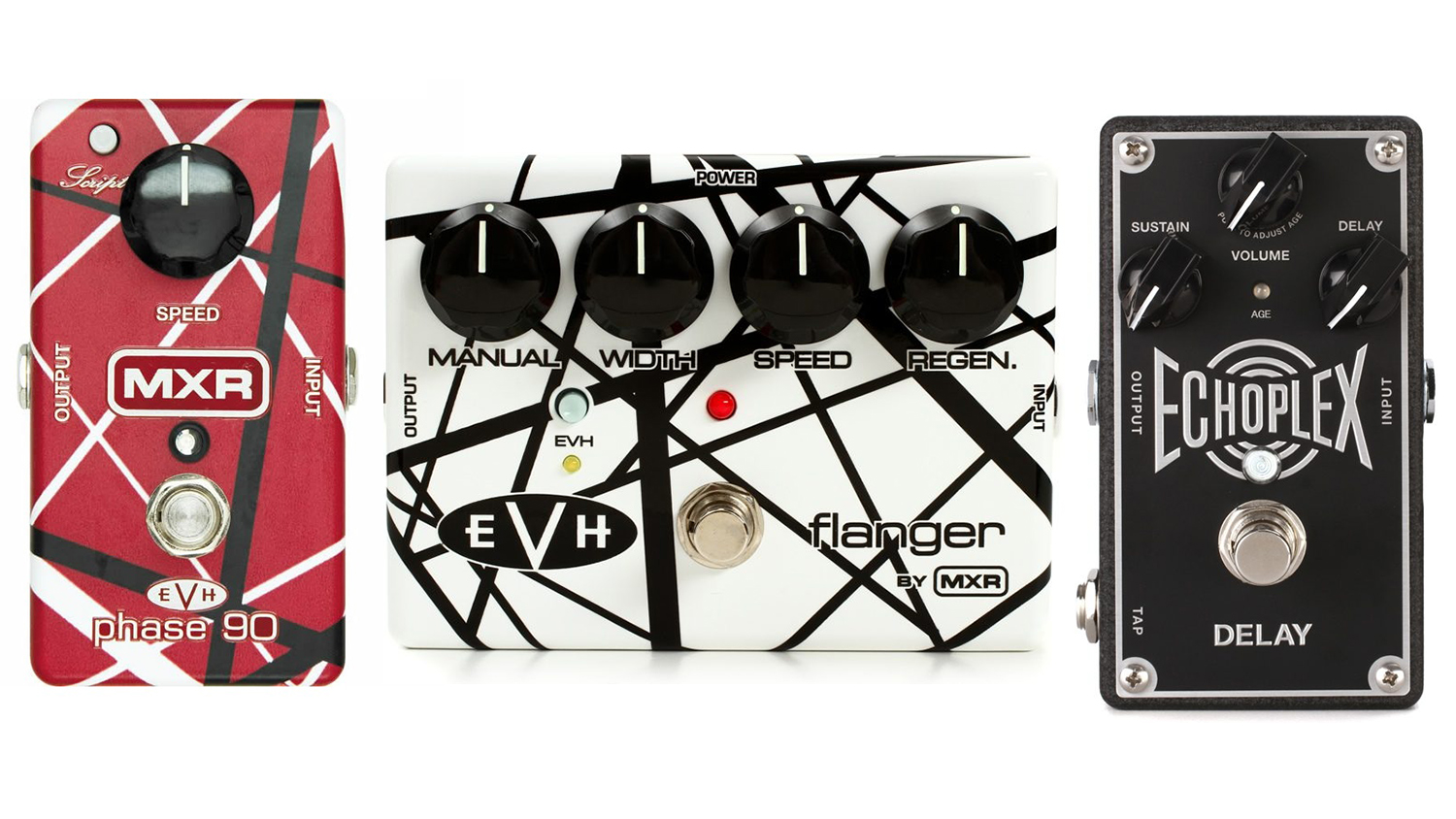 In the early days his pedalboard was minimal. It was a “piece of plywood” that contained an MXR Phase 90, MXR Flanger, and vintage Echoplex. He would also sometimes incorporate a MXR EQ depending on the guitar he was using. The Phase 90 was used to add movement and intrigue to certain passages, with the Flanger used in a similar way. The Echoplex was used not only for its notoriously awesome preamp, but also to add a short tape echo that is found in many places throughout their early catalog. Luckily these days you don’t have to lug around an actual Echoplex unit, as the Dunlop Echoplex Delay provides the preamp flavor as well as the echo. 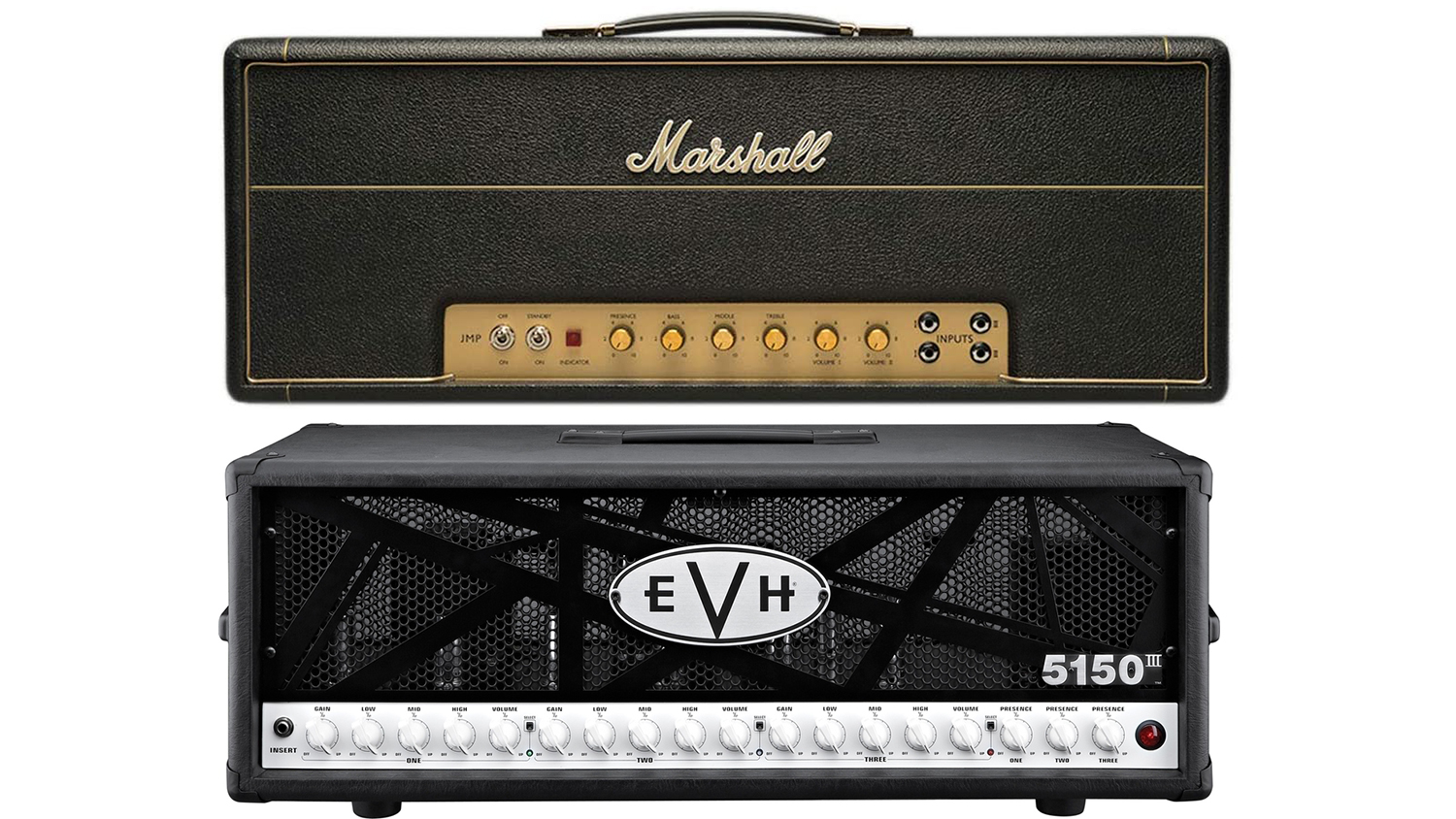 EVH was all about pushing his amps into power section distortion, and he has been quoted (at least during interviews from the early years) that he didn’t rely on distortion from the preamp. It was all about cranking that output section. To achieve his notorious “brown sound” from the first few records he used Marshall 100W Super Lead (Plexi) models with Marshall cabinets loaded with Celestion 30 or 75 speakers. In lieu of EL34 tubes, the Marshalls were outfitted with Sylvania 6CA7s. This type of tube can take more pummeling before breakup, and take longer to compress – making them more articulate and open-sounding.

Most settings were all the way up. The way he controlled the volume (the Marshalls were the non-master volume kind) was with a Variac. This device could increase or attenuate the voltage going into the amp, changing the sound pretty drastically.

Eventually his partnership with Peavey would lead to the release of the 5150 series line of amps (now under the EVH brand). These would become favorites of players not only trying to cop Eddie’s sound, but are renowned as the amp for many styles of heavy music. 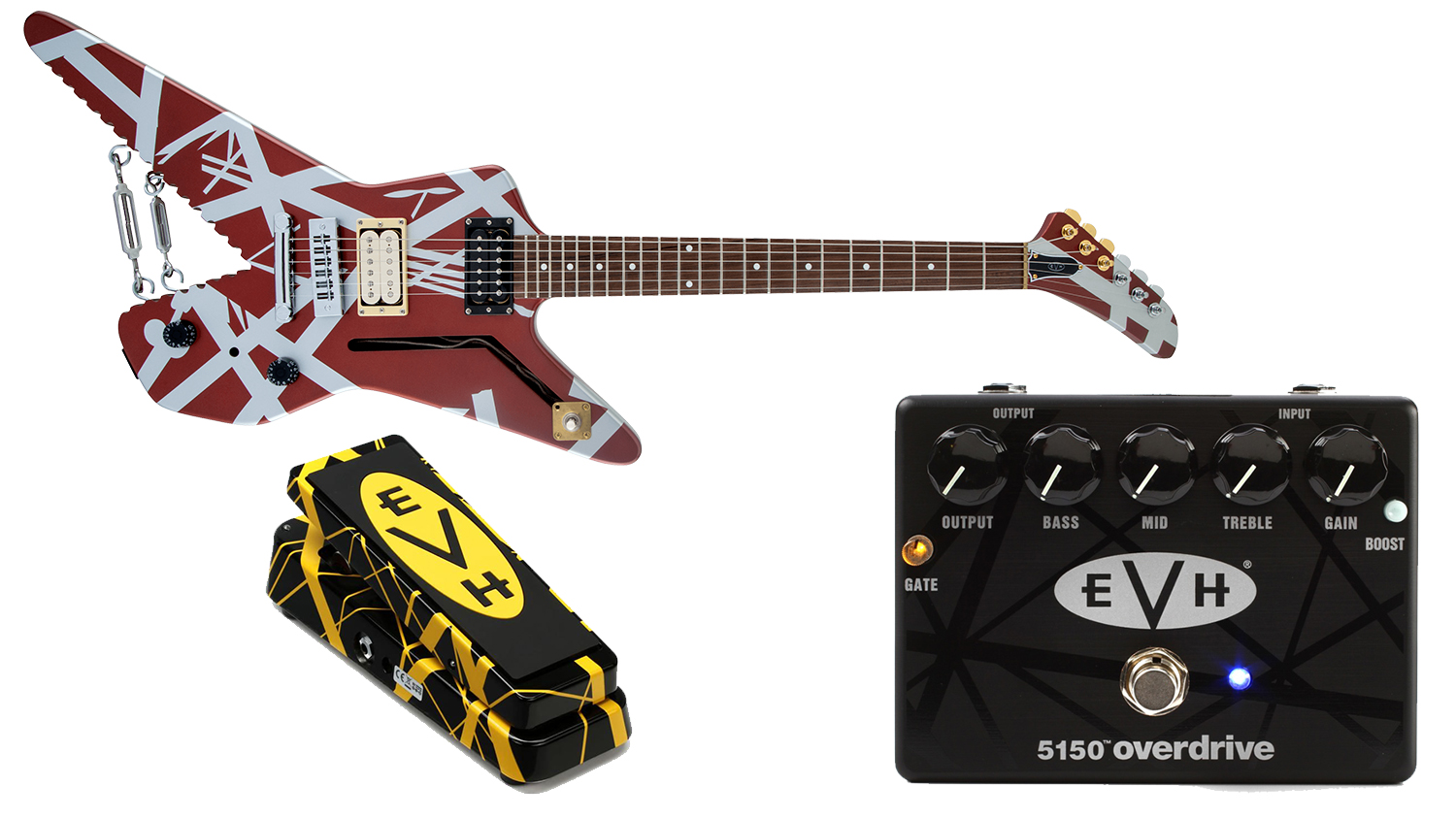 An Eddie Van Halen gear guide wouldn’t be complete without discussing his own product line. When Eddie first stepped into creating signature gear he was working with Peavey Electronics. It started with the Wolfgang guitar. This model was a pretty drastic deviation in tone, look, and feel from Frankenstein. But the Wolfgang offered many new features that Eddie wanted – like an advanced Floyd Rose tremolo system, dual humbucker pickups that offer more tonal options, and the D-Tuna – a mechanism that can instantly drop the low E string a step and back again.

Eventually he would come to create his own signature EVH line. The brand quickly expanded, and now offers a complete lineup of the authentic Van Halen gear that nails tones from all eras of the band’s catalog. These include multiple types of guitars like Frankenstein (with all three paint jobs), the Ibanez “Shark” Destroyer, the Star, the Wolfgang, as well as amplifiers, pedals, and pickups. 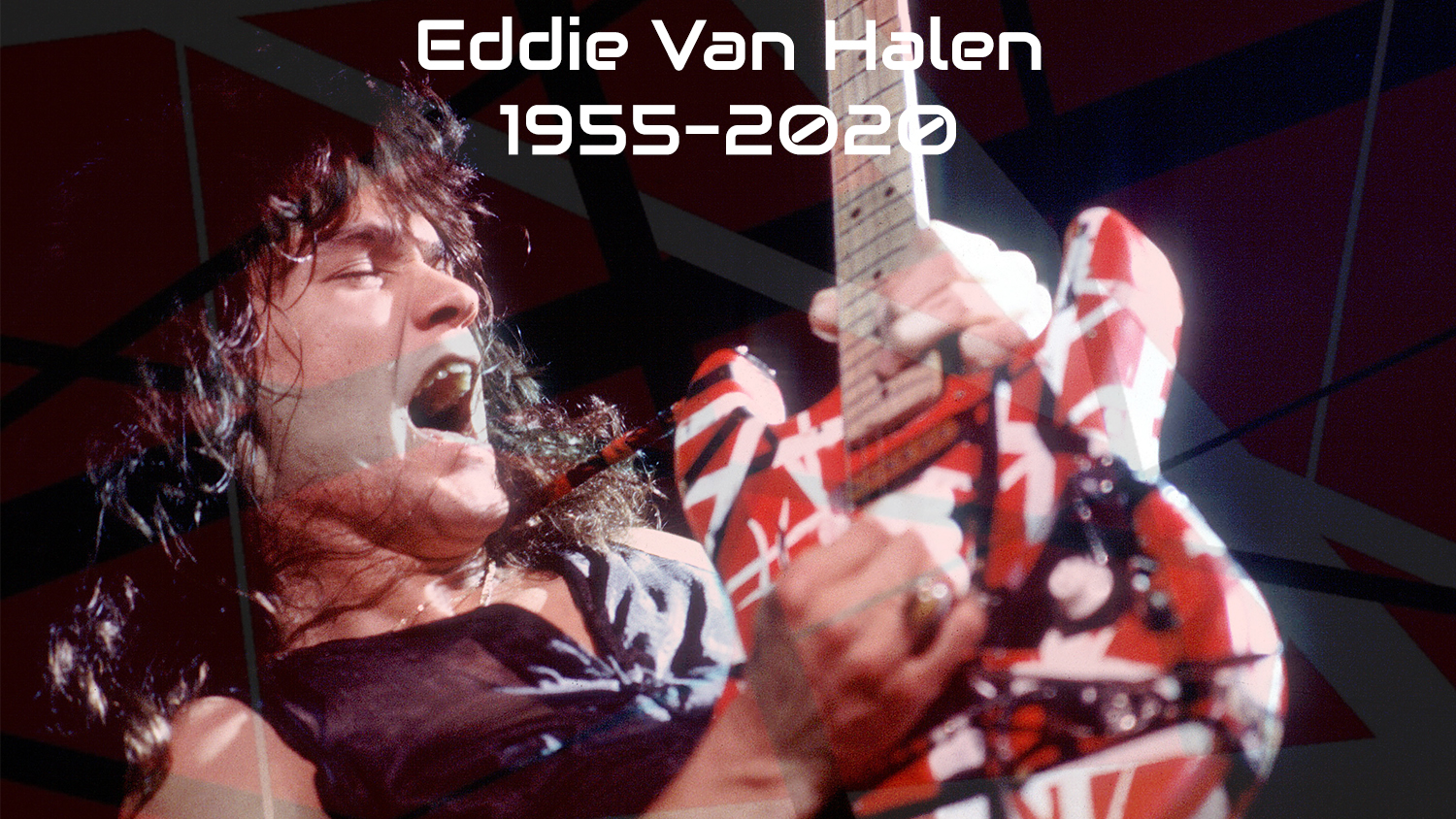 Rock in peace to one of the greatest guitar players to ever live.

Eddie Van Halen’s passing rocked the music world, but his reputation and legacy will live on forever. From the techniques and tools he innovated to the stellar gear that the EVH line makes, his contributions to rock music and guitar playing as a whole will endure. And all across the world his spirit will continue to inspire fledgling guitar heroes — just like it did for me.