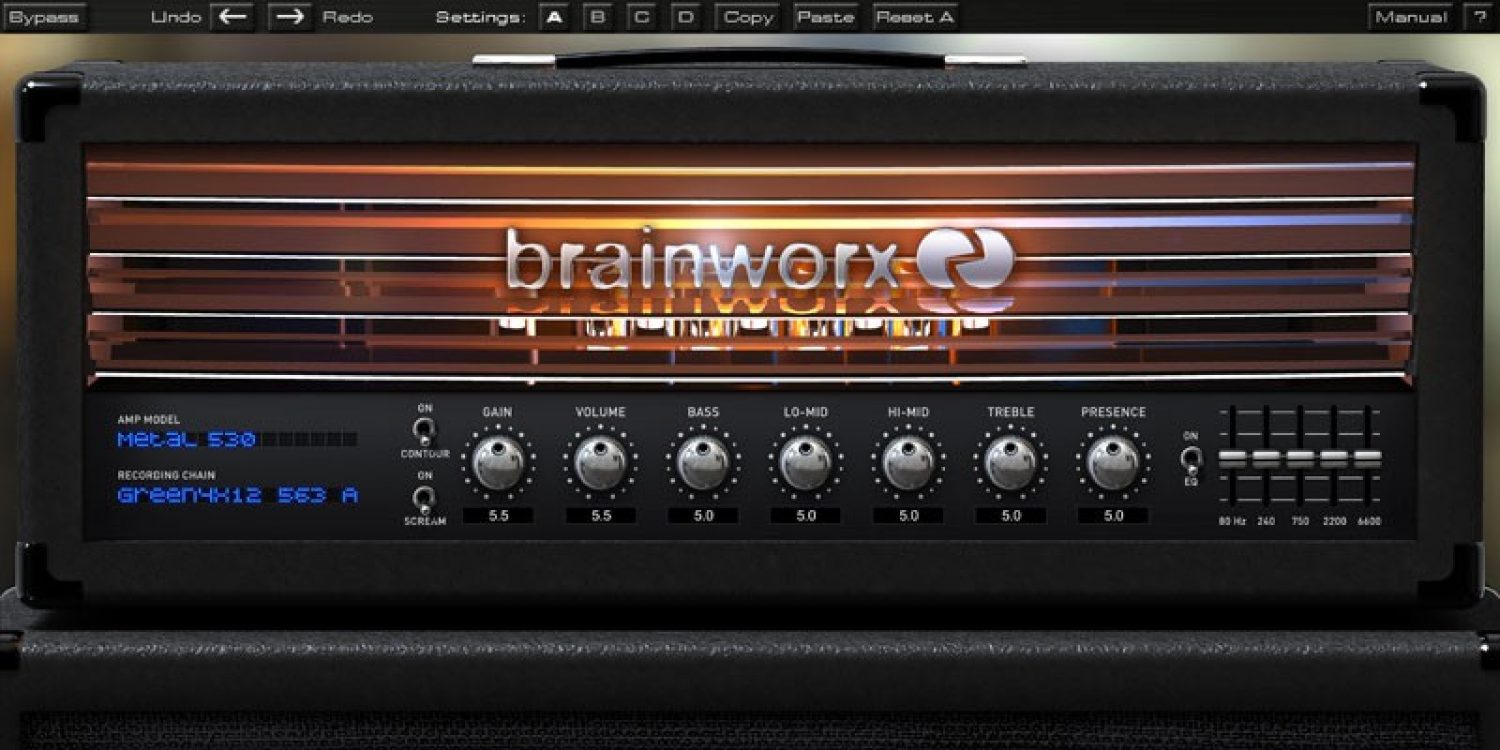 Brainworx “Rockrack” is an amp simulator that is all about quality. I’ve used quite a few simulators on the market, and this one is a step above and beyond. Instead of focusing on giving the user hundreds of amp, cab, and mic models to choose from, the team from Brainworx spent an equivalent amount of time with 4 amps, 5 cabs, and 4 microphones.

I own a Marshall JCM800, and this simulator is the closet one I’ve heard yet. The gain structure is very similar, breaking up similarly at equivalent points, like the real thing. In comparison to feel and response, it’s the closest tube “feel” from any amp sim I’ve played.

I’ve had the opportunity to run through my fair share of Orange 2×12 cabs. This model that Brainworx did captures the resonant frequency and “oomph” of the cab just right. It sounds amazing!

They give you an assortment of mic options to use on each cab, which consist of a Shure SM57, a Royer 121, and a vintage Neumann CMV-563. With the Neumann and the Royer they give you a couple options on mic placement, so you can get an on or off-axis sound.

Many people model an SM57 microphone in their amp sims, as it is one of the industry standard tools, but Brainworx knocked it out of the park. In the mix, the presence of their on-axis SM57 shines, boasting qualities like the real thing I haven’t heard from other simulators.

Immediately when you open up the plug-in it looks like you’re about to tweak a real amp head. On the left is where you choose your amp/cab/mic models, and in the middle are your gain, volume, and amp EQ and presence controls. On the right is a very musical and responsive 5-band graphic EQ. 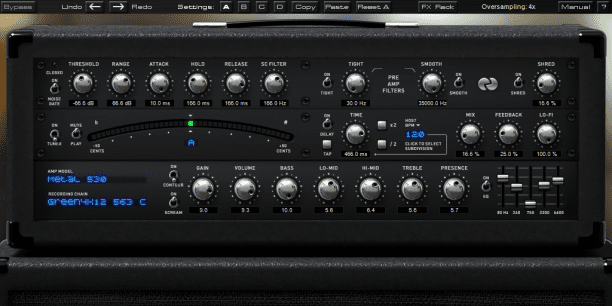 I’ve noticed through tweaking the amp EQ that’s it’s changes are most noticeable in the mix than when it is solo’d up, the mid and presence knobs being the most obvious tonal changes to my ears.

This amp sim also has a dedicated “FX Rack”. By clicking on a tab at the top of the plugin, you get access to a tuner, a variable noise gate, a pair of pre-amp filters, their unique “Shred” knob, and a delay.

The noise gate is completely adjustable, having a threshold control, range, attack, hold, release, and a filter. The thing I’ve enjoyed the most about using the built in noise gate over a gate before the plug-in is the release. This release feels a little more natural. It decays slightly more linearly than some other gates, so if the guitar part suddenly goes quiet in the song, it is a little less noticeable as it decays more pleasantly.

The preamp filters are also a great tool. They allow you to high and low-pass the direct signal. The filters have a gradual slope, allowing it to stay very musical, but still eliminating unwanted bass frequencies, or harsh high frequencies before the preamp.

The “Shred” knob is a unique tool taken from Bx Shredspread. It is a simple one-knob EQ tool that needs to be heard with your own ears to fully understand what it does. Every place on the knob is pleasing to my ears standalone, but each mix, or even each guitar part, could benefit from different amounts of this.

The delay is actually very well featured. It is a tap tempo delay, allowing you to adjust it to a rhythmic delay in context with the song, or you can use the time control to adjust it by milliseconds. It also has handy “x2” and “/2” functions, where you can double the delay time, or halve it. In a mix, this could be an easy automation move, instead of programming a completely different delay time in a hardware unit on the fly, or even a delay in the box.

Rockrack is extremely processor hungry, using about 40% of my CPU power for just one instance in a couple cases. The latency is very noticeable, and as such, is hard to track through. This plug-in definitely shines most when the dry tracks are already recorded and you’re using it during the mixing stage.

This plugin was developed in world-class studios with world-class engineers managing the project every step of the way, and it shows. From clean tones, all the way to insane shred tones, this plug-in has you covered. Go check it out today, you won’t regret it!

Orange is giving away free rock guitar lessons with any purchase