Yes, it’s true, I am not a Behringer fan. Most of their gear seems a little flimsy and frankly not very appealing, with a few exceptions. However their newest release did catch my eye. It seems that the iPad is becoming more and more a part of the digital audio world today with the release of the iX16, an iPad controlled mixer which also doubles as an 18 channel USB interface. Here’s the 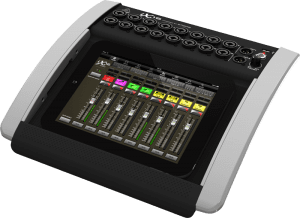 great thing about the iX16 – you can control your mix wirelessly. That’s right, you can detach your ipad from the dock, and move around the room, while still having complete control of the mix as you move around. What’s more is that you can control each monitor mix separately, meaning each band member could use an iPad to control their own monitors mix. This is nothing that we haven’t seen before, as Mackie has already released a number of mixers that can be wirelessly controlled with your iPad, however you can be sure that this Behringer model will be cheaper than Mackies $1000 iPad Mixer

, appealing to those of us who are perhaps on a budget, or just starting out in live audio but still want the flexibility and freedom that comes with a wireless mixer. The biggest thing that Behringer has over Mackie in this mixer is that it doubles as a USB audio interface for home studio applications, which is perfect for those of us who are just starting to dabble in audio and want a one stop solution for it all. One thing is for sure – we will certainly see more of these kinds of mixerspop up as time wears on, but for now Behringer seems to be leading the way in budget iPad controlled wireless mixers. Well done Behringer!

USB 4.0 could solve having to keep up with USB and Thunderbolt standards