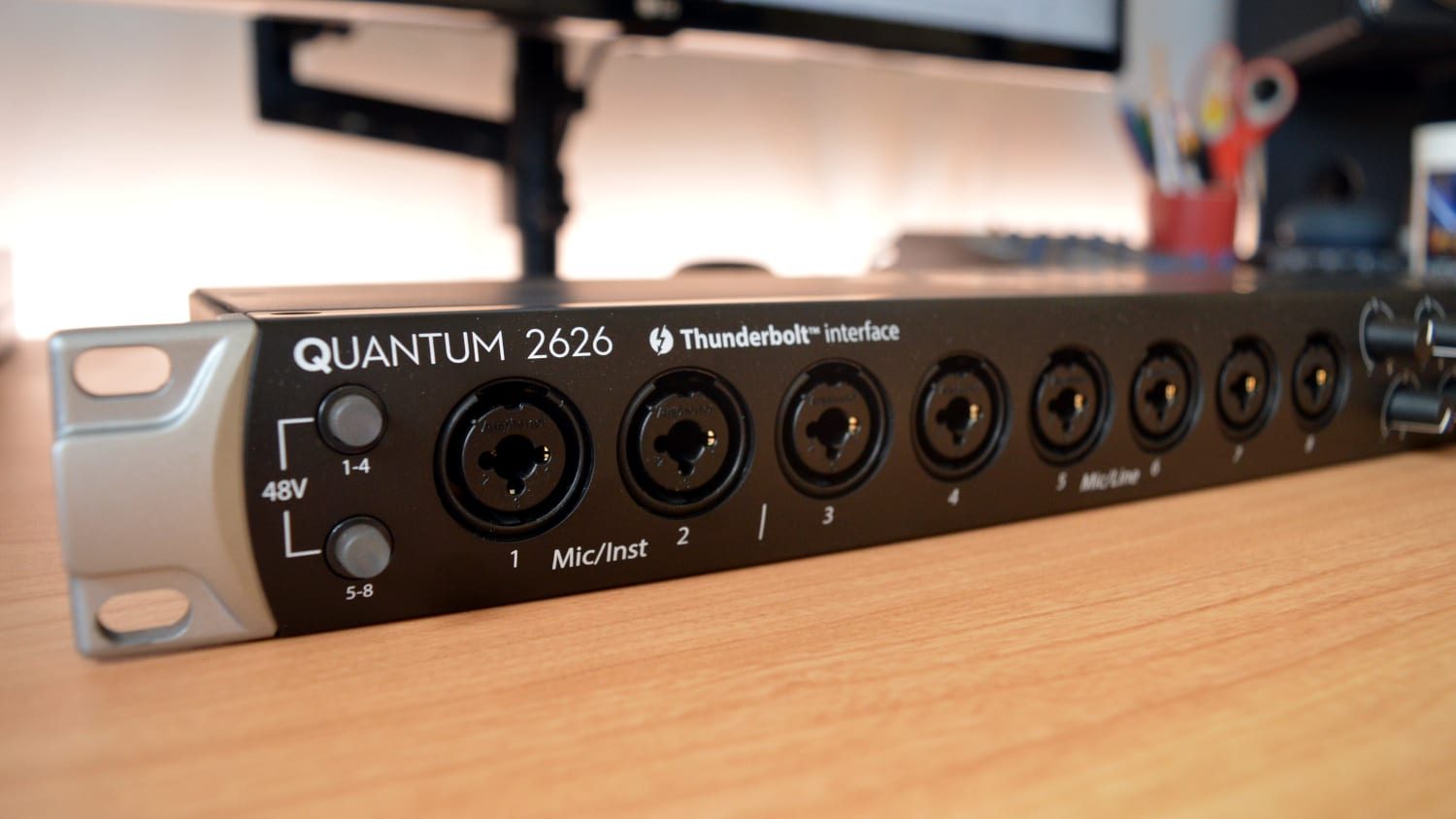 PreSonus has a long history in delivering both affordable audio interfaces, and higher-end interfaces for the professional musician. At NAMM 2020, the company unveiled the new Quantum 2626 interface, which boasts 26 inputs and 26 outputs, including 8 XMAX preamps, an ADAT optical port, and more — plus it offers a classy design too.

The interface is available for $599.95 — affordable for a production with all these features. But it’s also not without its competition, including the much-loved Focusrite Scarlett 18i20. But at $600, does the PreSonus Quantum 2626 deliver? We’ve been using it for a few weeks now to find out.

PreSonus interfaces have always looked nice, but I have to admit, I much prefer the darker color scheme on offer by newer PreSonus products compared to the light gray and blue color scheme that used to be used. This interface offers a sleek and stylish black and gray look, with blue highlights in the form of LED lights when on.

On the front panel of the interface, you’ll get inputs 1-8, including two mic/instrument inputs, and six mic/line inputs. You’ll also get two phantom power switches (for inputs 1-4, and 5-8), gain knobs for each input, a main output knob, and two 1/4-inch headphone jacks. There are also lights for the input of each input, and a Thunderbolt 3 connectivity status light. It’s a nice design, and means that most of the ports and knobs that you’re likely to use on the day to day are easily accessible. That said, individual phantom switches would have been nice.

On the back is where the rest of the action is. You’ll get two preamp outputs, along with two line return inputs, and eight TRS balances line outputs. Then, there are the main outputs, MIDI I/O, SPDIF I/O, optical I/O, and wordclock I/O. Yeah, there’s a lot of I/O. Also found on the back is the USB-C-shaped Thunderbolt 3 port. We’re happy to see more and more Thunderbolt 3-compatible interfaces, especially considering the fact that most modern computers use the new standard.

The biggest issue we had with the design of the Quantum 2626 has more to do with what’s included, or not included, in the box. This is a Thunderbolt 3 interface, but it doesn’t come with a Thunderbolt 3 cable in the box. That’s a pretty major omission, for a few reasons. First is the simple fact that users should be able to use their interface as soon as they get it, without having to deal with something as little as a cable. Secondly, not everyone is up-to-date on the differences between modern Thunderbolt and USB-C standards — and PreSonus could have removed that pain point by simply including a compatible cable out of the box. Now, in PreSonus’ defense, Thunderbolt 3 cables are a bit expensive, and users will have varying compatibility needs depending on the computer they have, but the fact remains that the lack of cable is a little frustrating when you’re excited to use your new interface.

Generally speaking, the PreSonus Quantum 2626 looks good, and is designed with functionality in mind. We think that the balance of front-facing ports and knobs is good, and while the power switch being on the back may be problematic for some ultra small studios or home studios, many will end up including the interface in their existing power management system anyway.

The Quantum 2626 has plenty of ports on the outside, but it’s no slouch under the hood.

When it comes to audio quality, the interface supports recording at up to 24-bit, 192kHz, which is pretty much the standard at this point. Further, it offers up to 115dB of dynamic range, which is a little more than the 111dB on offer by interfaces like the Focusrite Scarlett 18i20 — but not really enough to be a groundbreaking advantage.

One of the Quantum 2626’s best features is the fact that it connects to your computer through Thunderbolt 3, which allows for latency of as low as 1ms. The result? You can record through your favorite plugins without skipping a beat — and it’s a nice change. That’s in stark contrast to the likes of the Scarlett 18i20, which instead connects through the now-dated USB 2.0. I didn’t have access to a Scarlett 18i20 during this review, but if latency is a concern, then the PreSonus interface will almost certainly be the way to go.

This review is focused on the interface itself, not the software that comes with it — but the fact that it comes with both PreSonus’ Studio One, and the Studio Magic bundle, makes it even more versatile. Studio Magic itself comes with a range of handy plugins, and if you’re a budding producer, they’re excellent options to turn to without having to spend any extra cash.

As you would expect from a PreSonus interface, the Quantum 2626 sounds clean. That’s thanks to the PreSonus XMAX preamps, which have long offered a super transparent sound at a relatively affordable price.

There’s not much else to say about the sound-quality of this interface. We were a little limited in what we could record during this review, due to social distancing rules during the coronavirus outbreak, but on guitars, vocals, bass, and a few other bits and pieces, it sounded great. We wouldn’t hesitate to use the Quantum 2626 on drums and other instruments too.

The PreSonus Quantum 2626 isn’t just one of the best audio interfaces under $600, it’s one of the best audio interfaces under $1,000. The interface offers everything you would need in a small or medium-sized studio, and while the lack of a cable and the slight limitations in phantom power render the interface imperfect, in this price range, it’s about as close to perfect as you’re going to get.

As mentioned, there is some competition. The Quantum 2626, however, beats out pretty much everything else in at least one area. Some interfaces offer Thunderbolt 3, but not as much I/O. Some don’t make use of the new Thunderbolt 3 at all.

No matter what you’re looking for from an audio interface, if you want a modern option with support for Thunderbolt 3, the PreSonus Quantum 2626 is the way to go. You can buy the interface for yourself using the links below.