The Big Knob Studio is arguably the most closely-related descendent to the original Big Knob, not only in how it works, but also in how much it costs. But it’s not just a slightly different look — the Mackie Big Knob Studio, along with the Studio+, transforms the series from a monitor control system to a fully-fledged home studio center. How? By adding two mic preamps and USB functionality — making the device a recording interface too.

This isn’t the first monitor controller we’ve looked at — we recently also reviewed the PreSonus Monitor Station V2 — which scored quite well in our review.

When we first took the Mackie Big Knob Studio out of the box, we were struck not only by how well-designed it was, but also how well-built it seemed. All of the knobs, switches, and buttons seem strongly implemented and ready to withstand the day-to-day abuse involved in running a studio. That’s not unexpected of Mackie — long has the company built products made to last. But it’s still nice to see that tradition continuing.

On the front edge of the device, you’ll find two headphone outputs, along with a 1/8-inch stereo input. On the back, you’ll find the rest of the ports — two XLR/TRS combos, a stereo main source input, stereo two-track output, and two sets of stereo monitor outputs. You’ll also find the USB output and power input, and a recording source selector. With that switch, you can choose between the main inputs, and the 2-track for the recording source.

Once you’ve connected everything at the back, the main front panel is where the magic happens. The centerpiece of the panel is, as you might expect, the “Big Knob” — which is the main volume controller. Apart from that, however, you also have controls for selecting which monitors to listen through, a talkback level control for the built-in microphone, headphone volume controls, and so on. You also have controls for the gain of the mic preamps — including a 48V phantom power switch, though that switch controls phantom power for both preamps, so you’ll want to be careful if you’re using a microphone that can’t necessarily handle phantom power. 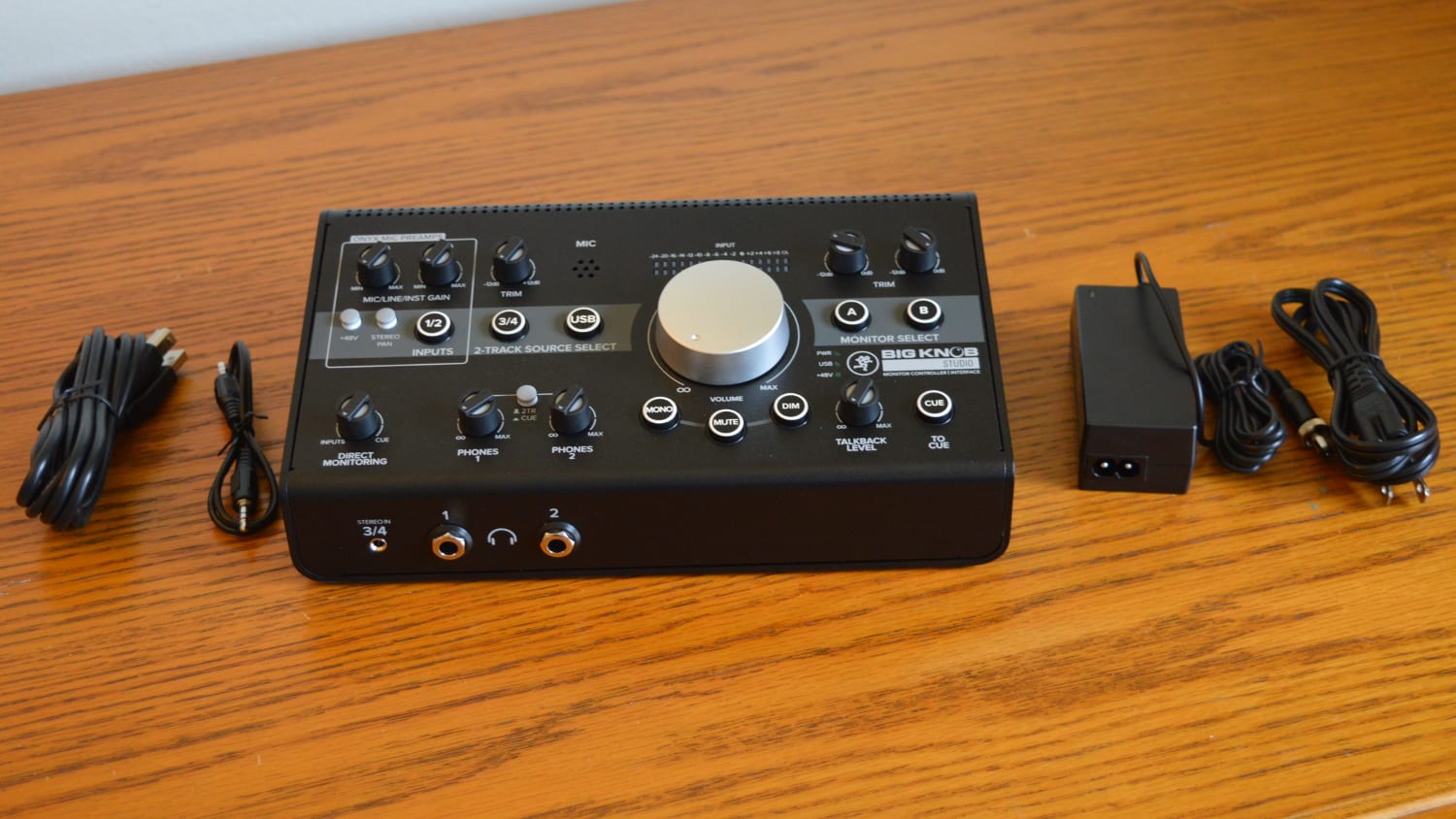 The Mackie Big Knob Studio doesn’t just look good — it’s relatively easy to use too. We loved the design of this device, and had little trouble in getting to learn how to use it.

The Mackie Big Knob Studio brings the Big Knob series into the recording interface world, and it’s a very nice addition to see. What it means is that home and small studio owners not only get a great monitor control system for their studio, but they get also get a few extra mic preamps for recording. That can make a huge difference, especially for those just starting out. 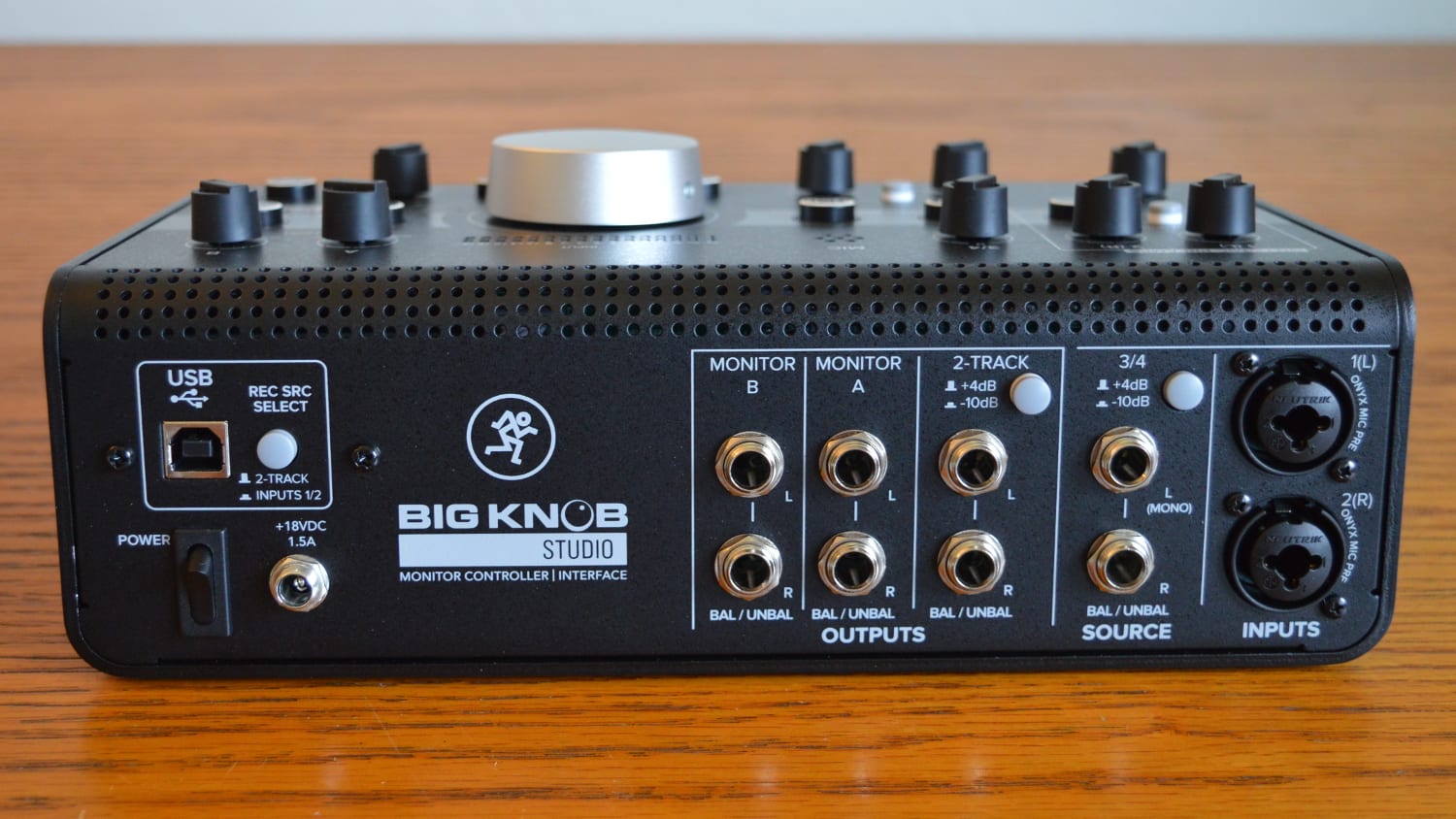 Mackie’s Onyx preamps have long been hailed as offering a ton of clarity and definition, especially when put up against other entry-level preamps from the likes of PreSonus and MOTU. In our testing the preamps indeed sounded great — not only were they very clear, but super transparent too — which is an important thing to consider. That’s good news for home studios, as it makes the interface a little more versatile — it’ll sound great no matter what you record, and the color in your recording will come from your mixing rather than the recording process itself.

The interface is capable of recording up to a 192kHz sample rate with a 24-bit bit depth, which is great for most home and small studio uses.

So is the Mackie Big Knob Studio better than offerings from the likes of PreSonus? Well, that depends. If you’re building a home studio and could use the preamps in the Big Knob Studio to get you started, then this is definitely the device for you. The PreSonus Monitor Station V2, on the other hand, comes with three speaker outputs — which might be helpful depending on your needs.[/vc_column_text][/vc_column][/vc_row][vc_row][vc_column][vc_column_text el_class=”wheretobuy”]

PreSonus has a history of delivering excellent audio interfaces at a great price -- and the company is back again with the PreSonus Studio 68.

Sound Devices is a growing force in the audio world, and the company recently unveiled the Sound Devices MixPre-6. But is it worth the $900?

IK Multimedia is back with yet another great guitar pickup system, called the IK Multimedia iRig Acoustic Stage. But does it live up to the iRig name?