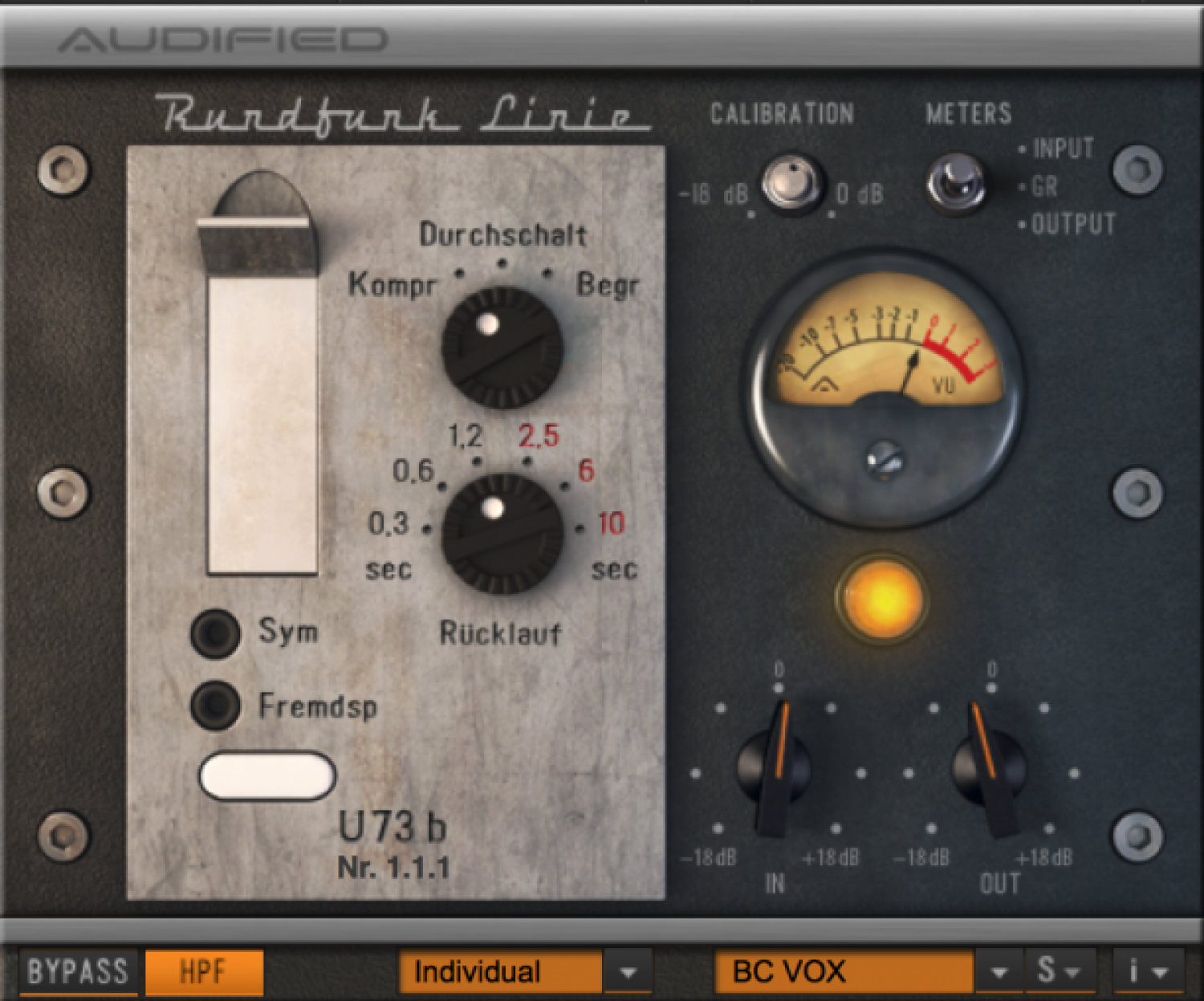 Audified – previously Audiffex – has released a new compressor plugin that aims to emulate the classic German u73b broadcast compressor, used rather extensively for mastering between 1960 and 1980.

The compressor certainly is well known, but can the plugin live up to the classic u73b name? We were lucky enough to be able to sit down with the new compressor to take a look at it.

The user interface of the plugin is rather simple, and what you see is really what you get – or it would be if it wasn’t in German. This might not be a problem for someone who has used German compressors in the past, however it would be easy to imagine someone getting stumped by the German labels and having to look up the names. Of course this was done to take the emulation as far as possible when it comes to realism, so that, at least, is a respectable reason.

At the top left can be found a knob to control the mode of the compressor – with there being three options available: Kompr, or compressor, Durchshalt, or bypass, and Begr, or limiter. It’s important to note that the bypass option here is not the same as bypassing the actual plugin, as the audio is still run through the virtual “circuitboard” of the compressor, giving it somewhat of a warmth without actually compressing.

Directly below the mode switch is the Rücklauf, or release time, as could be deciphered by the seconds values, which are different options for the knob.

To the right of the plugin can be found a calibration knob, a switch to control the meter mode (input, gain reduction, or output), and volume controls for the input and output of the compressor.

At the bottom of the window can be found a high-pass filter and a bypass switch, as well as a drop-down menu for the channels to be used and a preset selector.

The first thing to note about the sound of this compressor is that it sounds great when it is pushed, but sounds not so great when pushed too much. After a certain point, the audio simply sounds choppy and a little unnaturally so. Despite this, it doesn’t seem like anyone would want to push this compressor as hard as it takes to get that effect, and you can certainly get a very warm, tube sound from it far before hitting that point at all.

As would be expected from an emulation of a classic tube compressor, it sounds very warm, and very heavy. This would not be a go-to compressor for taking a little bit off the top. This is the compressor you go to when you want to get things pumping. It certainly doesn’t take very much to make the compressor act on the incoming audio, and even a little gain reduction obviously effects the sound. This isn’t, however, necessarily a bad thing.

The u73b by Audified certainly does offer a classic sounding compressor and one that would be a useful tool in any mixing engineer’s toolbox. While the fact that it is in German and that it doesn’t fair too well when being pushed too hard are things to be aware of, when used correctly the u73b has a lot to offer.

SSL announces the SSL Fusion, its first all-in-one processor of its kind in 25 years