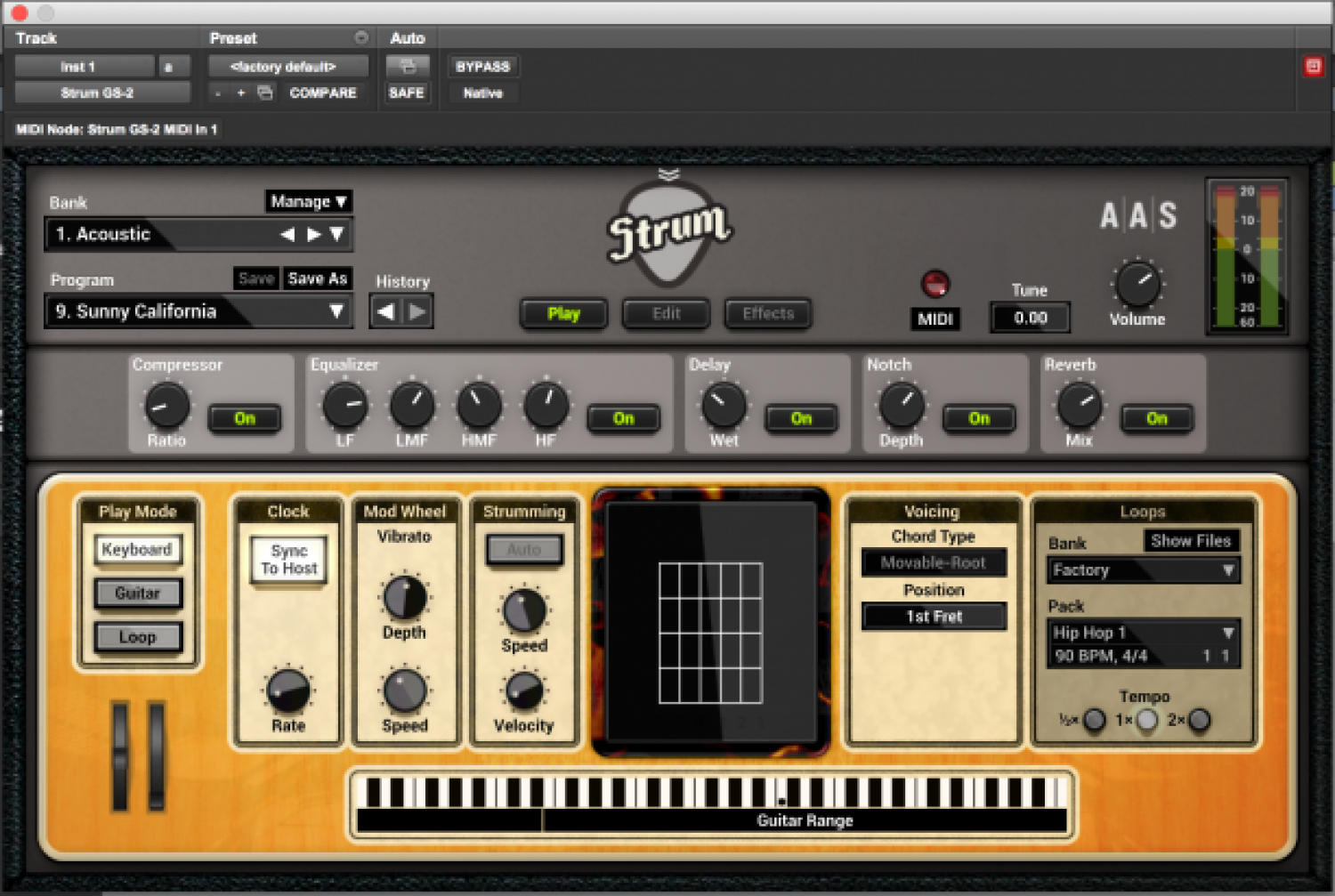 Strum GS-1 was very well received, and GS-2 has a lot to live up to. We were lucky enough to be able to take a look at the GS-2 to see if it lives up to the name of Strum.

As is the case with any software, the user interface is the first thing to notice. The user interface is laid out in a very easy-to-manage way, with everything being clearly labelled. Users have drop-down menus to choose between banks and programs. There are six banks in total, with two acoustic guitar and four electric guitar offerings, and each of those banks has between 11 and 80 programs of its own. It’s really a pretty expansive library of sounds.

Once a program is selected, users can tweak the sounds with various effects. Acoustic guitars include a compressor, an EQ and time-based effects, with electric guitars offering the same controls that will be found on most guitar amps. Users can also toggle between different windows, with more expansive effects controls being found in the “Effects” window, and the “Edit” window allowing users to even more meticulously tweak sounds, even going as far as tweaking things like tone by individual string.

Users can also choose between a number of different play modes, which we will discuss later, and settings related to loops and patterns.

As mentioned, the plugin includes a number of different “play modes,” essentially being different ways to use Strum. The first is called “Keyboard,” and as the name implies, it simply plays guitar sounds triggered by MIDI notes, with each MIDI note triggering a different guitar note.

The third and final mode is “Loop” mode, and it allows users to trigger loops using single MIDI notes, or combinations of notes, depending on the chords that the user wants to play. Beyond the range of “Chord Keys,” users will also be offered “Loop Keys,” which allow for users to change which loop is being played, simply by pressing a key. Of course, loops can be altered and created, and everything is easily handled through MIDI.

The main complaint that users have with these kinds of plugins is that they sound fake. While it would be hard to say that Strum is a “guitar replacement,” it certainly is one of the best sounding guitar plugins out there, and will certainly be useful for adding depth to any arrangement, especially in the hands of a good mixing engineer.

While at times AAS‘ Strum GS-2 can sound a little “general MIDI-y,” GS-2 is a great rhythm guitar plugin, and one that will certainly add a new dimension to a mix, especially when well placed within that mix. Rounded off with a great price of only $149, and GS-2 is hard to pass up.