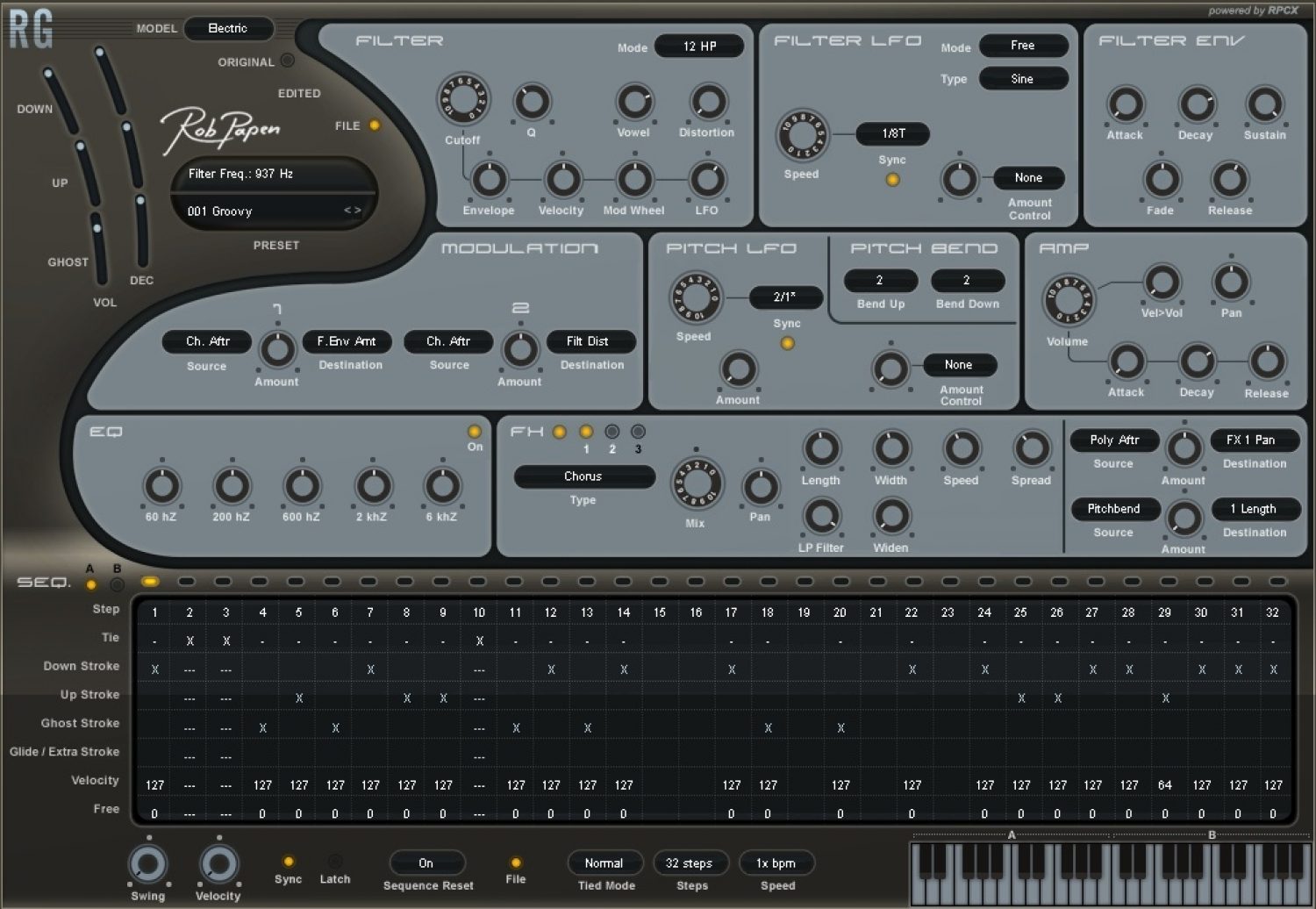 For avid users of software instruments, rhythm guitars can often be a difficult instrument to emulate. The Rob Papen RG (which stand for rhythm guitar) aims to offer a flexible solution to this problem, and could just be what users are looking for.

There are 10 main sections to the software, with the filter, filter LFO and filter envelope covering the top row of sections. The second row offers the modulation, pitch LFO and amp sections, with the third row displaying the EQ and FX. At the bottom of the plugin the sequencer can be found, which offers up to 32 steps with seven different parameters; Tie, Down Stroke, Up Stroke, Ghost Stroke, Glide / Extra Stroke, Velocity, and Free.

The sequencer in RG is one thing that sets the plugin apart from others. Allowing users to program up strokes, down strokes, ties, and so on, is a great addition to the plugin, and gives the sound of the plugin a much more realistic sound. It is also rather versatile, offering up to 32 steps.

Despite the ability to program things like swing, the plugin does not offer a way for users to manually quantize, making the plugin sound a little robotic at times. This is, however, a small problem and would probably not be a huge problem in, for example, a pop mix.

Contrary to what one might expect from a rhythm guitar simulator, the Rob Papen RG sounds great. While the purists among us may not find it as good sounding as  a real rhythm guitar, RG is one of the best options on the market, and one of the most versatile.

On top of the raw sound of the plugin, the amp section of the plugin is very versatile and no-nonsense. The EQ further allows users to be able to tweak the sound to taste, and the modulation section allows for manual modulation routing, which is a great addition to the plugin.

As far as effects go, there are a total of 22 and users can use up to three at one time. Most of the effects are what you would expect; delay, reverb, compression and so on. A cool thing about the plugin is that some of the effects are specifically tailored to guitar, such as amp simulators and a wah effect.

One thing to remember about the plugin is that in order to sue it, you need to have basic knowledge of guitar and how it works, at least to make it sound realistic.

All in all, Rob Papen’s RG is a great plugin, but like any emulation, it’s not perfect. With an easy to use interface and a number of great sounding guitar choices, as well as a wide range of effects that help get the sound that you want, RG is one of the best sounding rhythm guitar emulations we’ve heard.