Magnetic pickups are actually one of the oldest pieces of what we know as “modern guitar technology”. They were originally invented in the 1930s, consisting of a magnetic base material that has an additional magnetic wire (often copper) wrapped around it. A pickup is a transducer, which means it picks up the way that the guitar strings are vibrating within the magnetic field created by the pickup itself and converting it into an electrical signal that is then fed into pedals, amplifiers, preamps – whatever is next in line. Pickups are a very deep topic, and this guitar pickup guide is meant to help break down some of the more fundamental aspects of how they work and the tonal differences between them.

What Gives a Pickup Its Sound?

So, what are the factors that determine how a pickup sounds? The type of wire that is used, the type of magnetic and the strength of it, the amount of windings the wire has and how it’s wound, et al. As you start to understand, there is a tremendous amount of bespoke craftsmanship that goes into making pickups. Another interesting thing about pickups is that they never add anything to the frequency range. They are designed to capture everything and then tuned to take specific things away – or leave them in place. 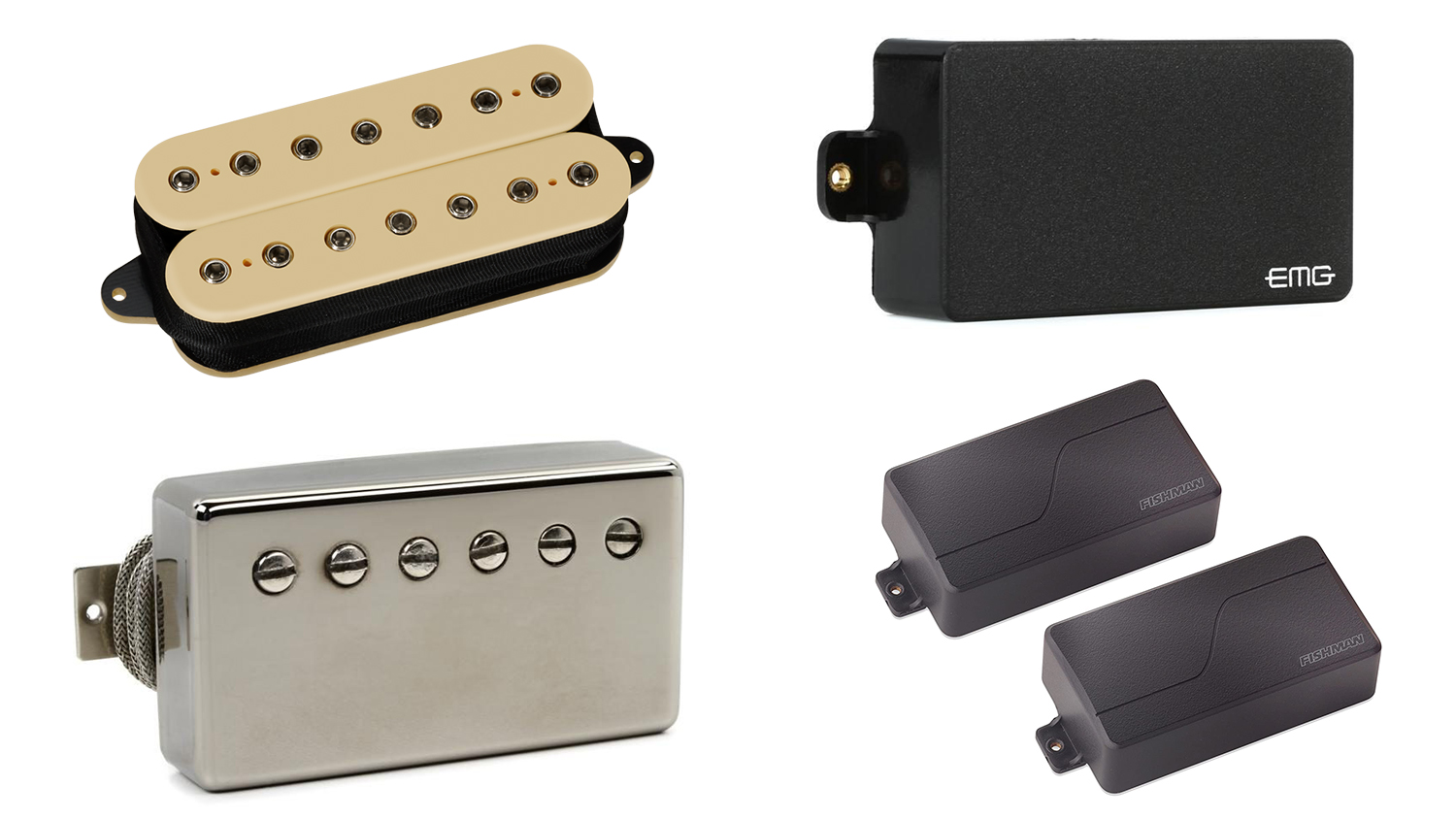 Pickups come in two overall variations – passive and active. Passive pickups are by far the most common. They don’t need an additional power source, while active pickups usually employ an on-board preamp that runs off of a 9v battery. While it’s safe to say that most guitarists prefer passive pickups, active pickups absolutely have their own benefits. They are usually completely silent, and capable of producing great heavy tones perfect for metal and aggressive styles of music. That being said, David Gilmour of Pink Floyd is well-known to use active single-coils in his Strats.

How Do Active Pickups Work? 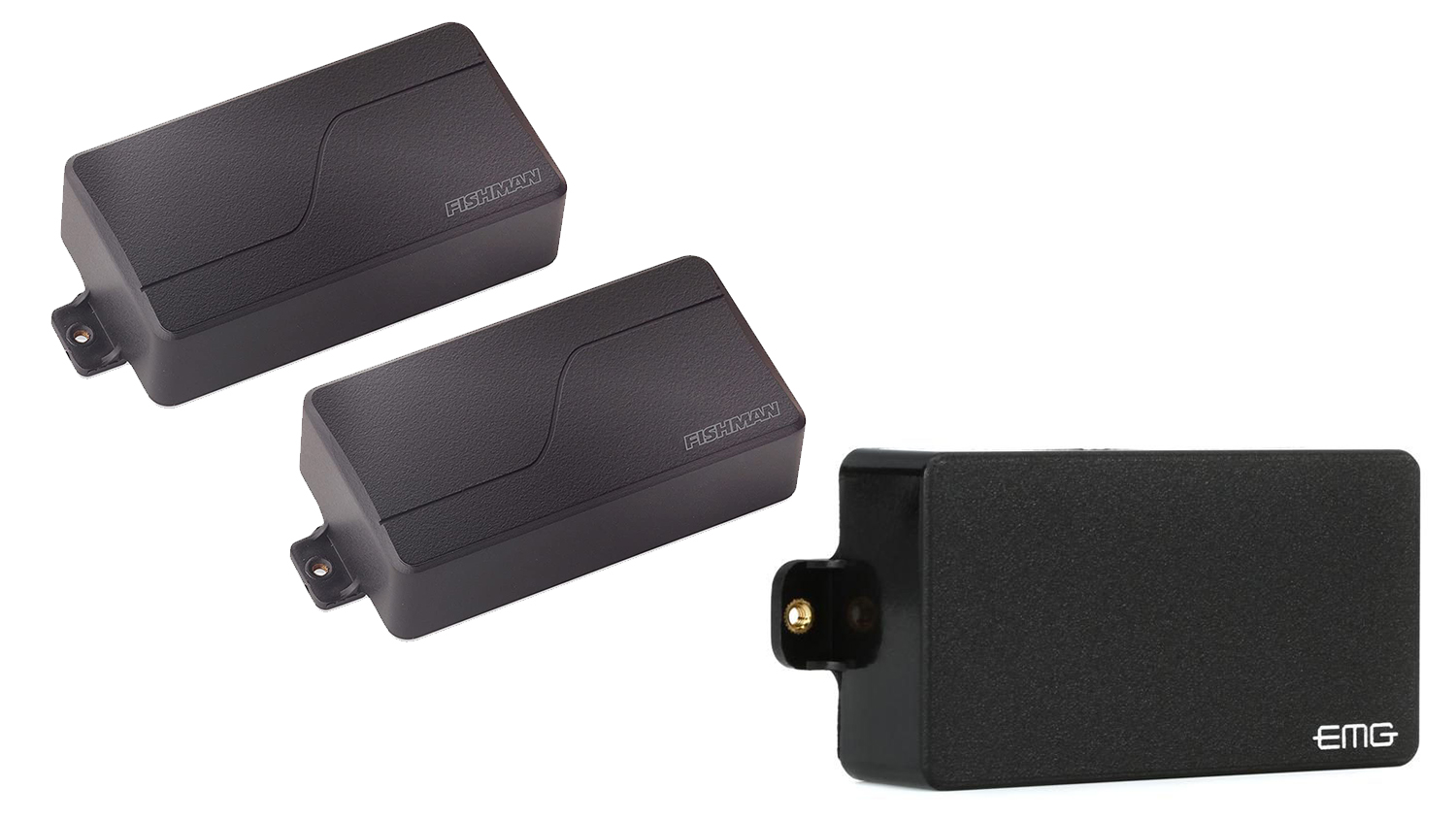 They can vary quite a bit as far as tone goes, but the concept behind active pickups is not unlike their passive counterparts. At its core it is a very low output passive pickup with less windings. As the string creates the vibration the signal is much weaker due to the low output. It then goes into a preamp that adds gain to the signal. Some preamps also feature equalization (and sometimes other signal processing!) like those used for acoustic guitars.

After going through the preamp the signal becomes much “hotter” than even the highest-output passive pickup – but remains much quieter. This is one of the reasons they are so popular with players in very heavy, high-gain styles of music. It’s also important to note that most of the volume/tone control sections that come with active preamps are usually still passive – meaning they can only cut and not boost. 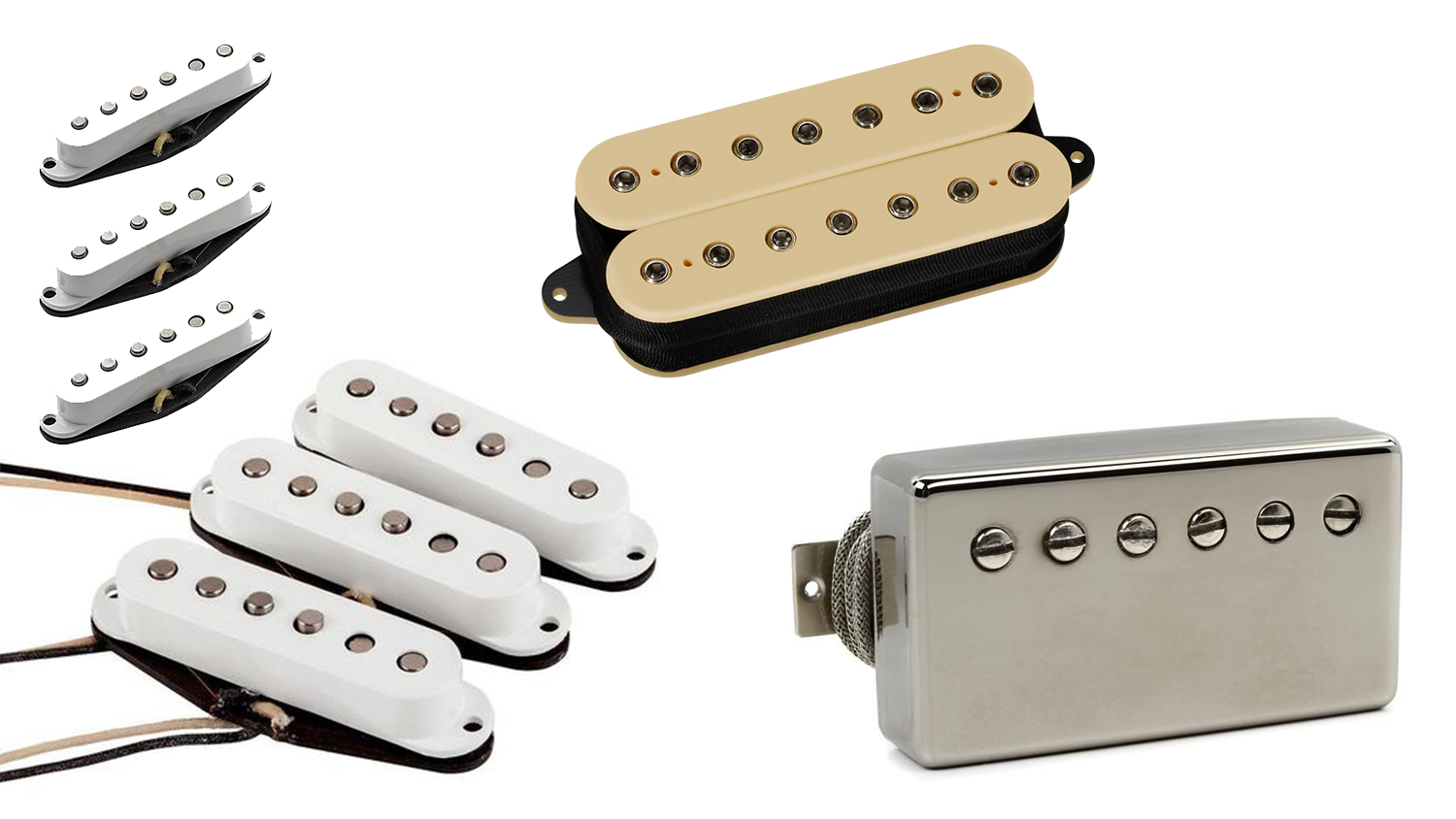 Perhaps the biggest topic when it comes to any guitar pickup guide is how single-coils and humbuckers differ. These are the two main types of guitar pickups and there are variants beneath each of those categories, each with their own distinct features and benefits. 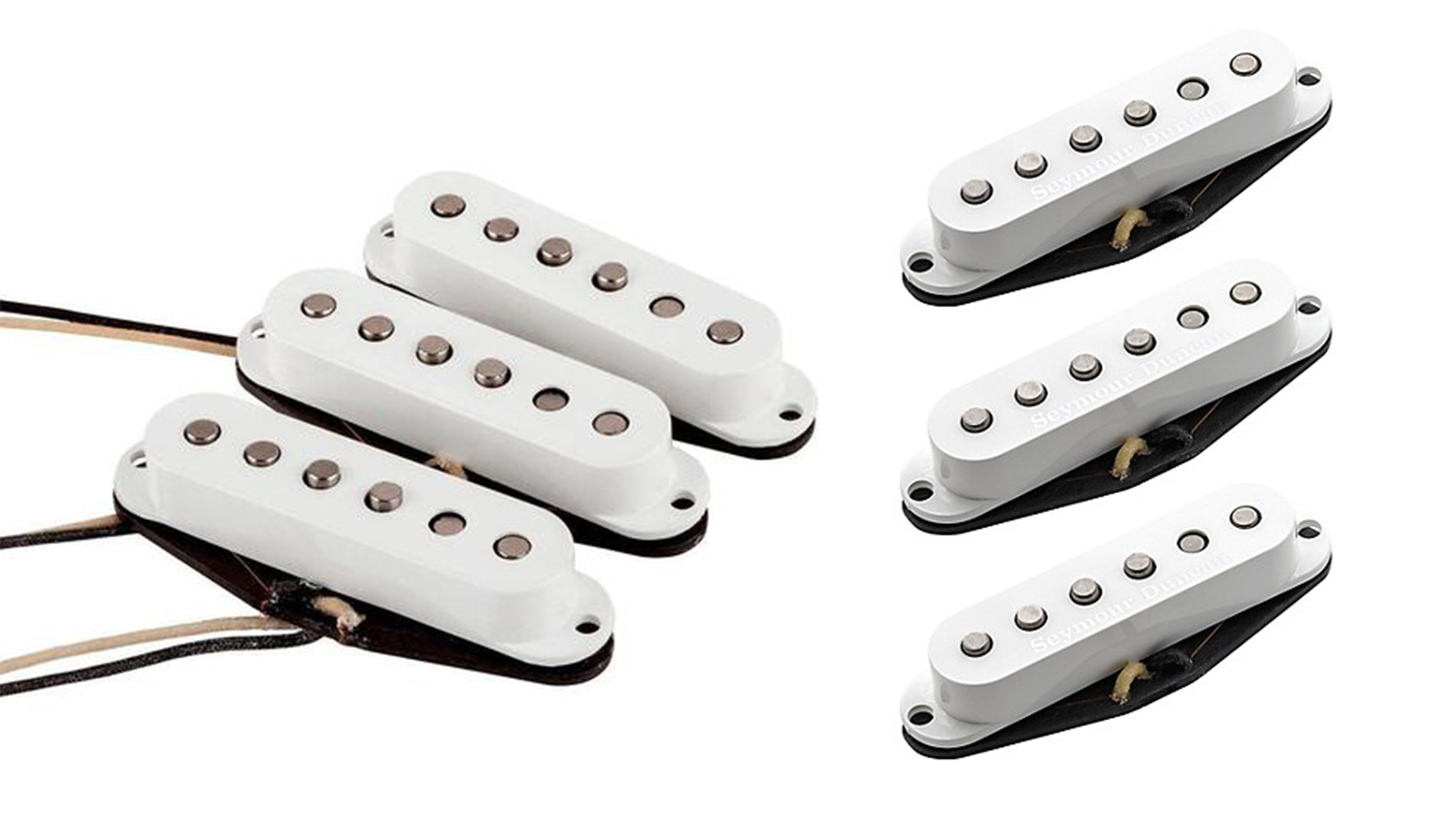 Single-coils are known for being articulate, with a lot of clarity. They are built with insulated wire wrapped around “polepieces”, which are separate magnets that pick up the vibration of each individual string. When the string vibrates it affects the magnetic field that is created, and this fluctuation is transduced into electrical current that is then sent downstream (to an amp, pedal, etc.). A cover is used to help shield from electrical interference, but to many the infamous 60 cycle hum is an integral part of the single-coil experience.

This type of pickup is most closely identified with Fender guitars, specifically the Stratocaster and Telecaster. Each of these guitars uses its own specific type of single-coil to achieve a signature sound. Single-coils have a clear, glassy tone and they sound just as good dirty as they do clean. They are bright, with a bit of a dip in the midrange. They have lower overall headroom than humbuckers and can break up nicely on their own. 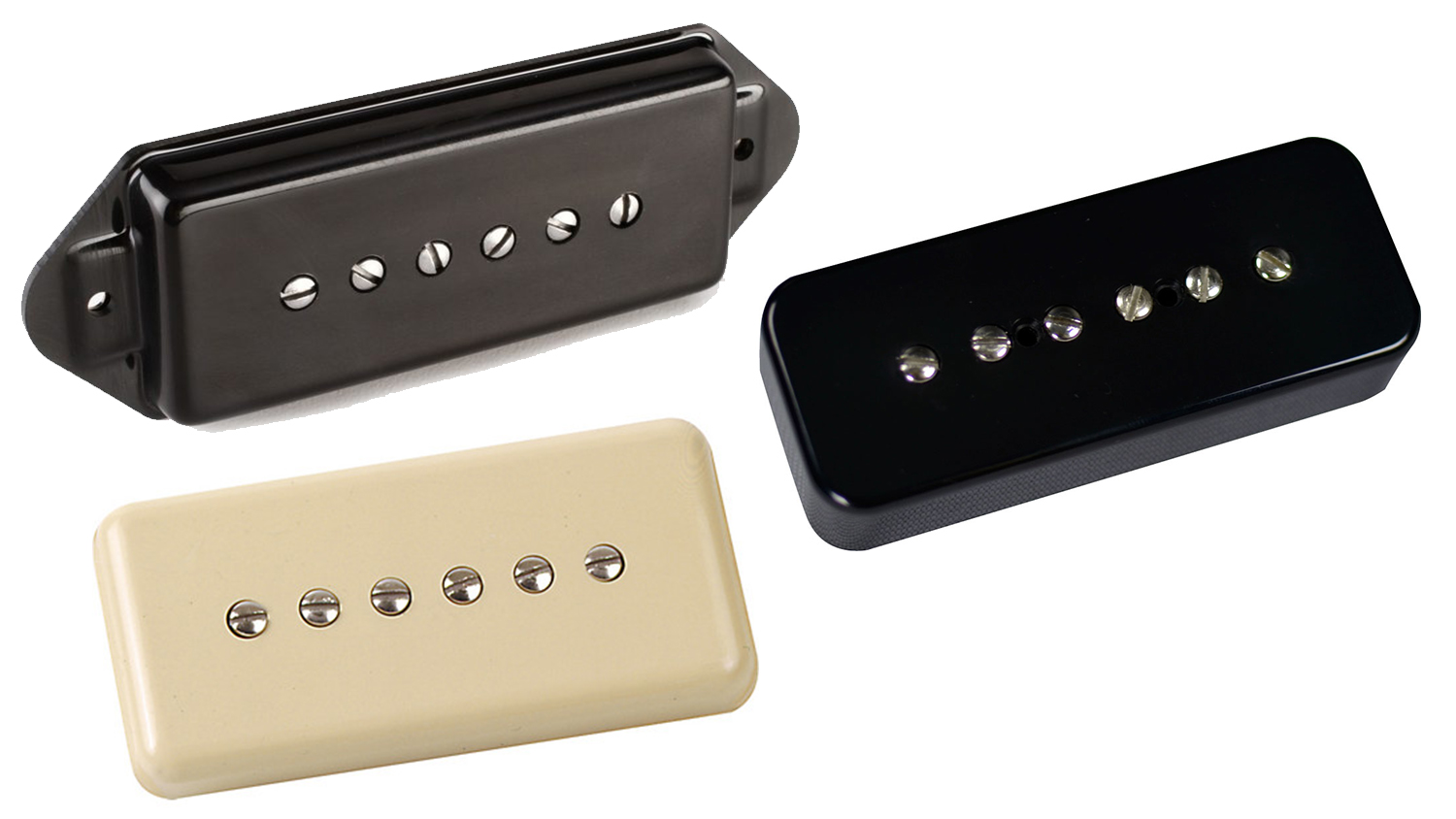 By far one of the most unique and interesting sounding pickup varieties is the P-90. It has a single bobbin, so it is (from a design perspective) technically a single-coil.  However, this bobbin is wider and shorter than a standard single-coil. But tonally it is a perfect hybrid, as it combines the clarity of single-coils with the girth and grit of humbuckers.

Though they are a type of single-coil, the sound produced is much thicker and more midrange-focused. They sound great overdriven and clean. Just like their single-coil counterparts they can be noisy, but again there are multiple noiseless varieties on the market today. 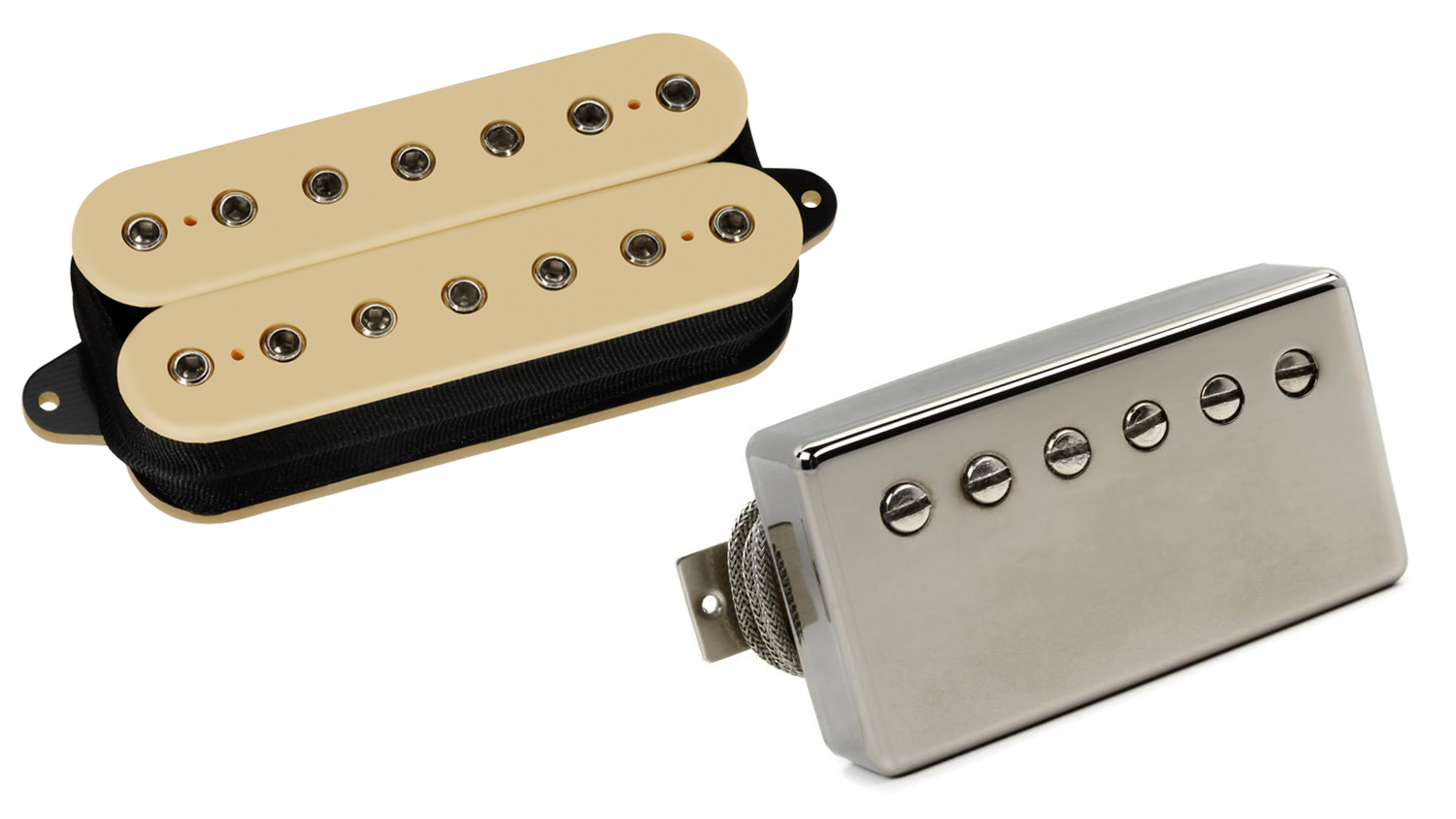 Perhaps the most varied type of pickup is the humbucker. Its design relies on two single-coil pickups with the magnets out of phase placed over another magnet. This offsets the 60Hz hum ever so present in single-coils and “bucks the hum”, and so the term humbucker was born! The amount to which they cancel the hum breaks down to how similar the coils are to one another, so the hum is never usually gone completely.

Humbuckers are known to be more compressed and thicker sounding than single-coils, with a stronger midrange accent. They are ubiquitous with heavier styles of music that use a lot of overdrive/distortion but can sound very smooth when cleaned up – ever heard Les Paul play?! 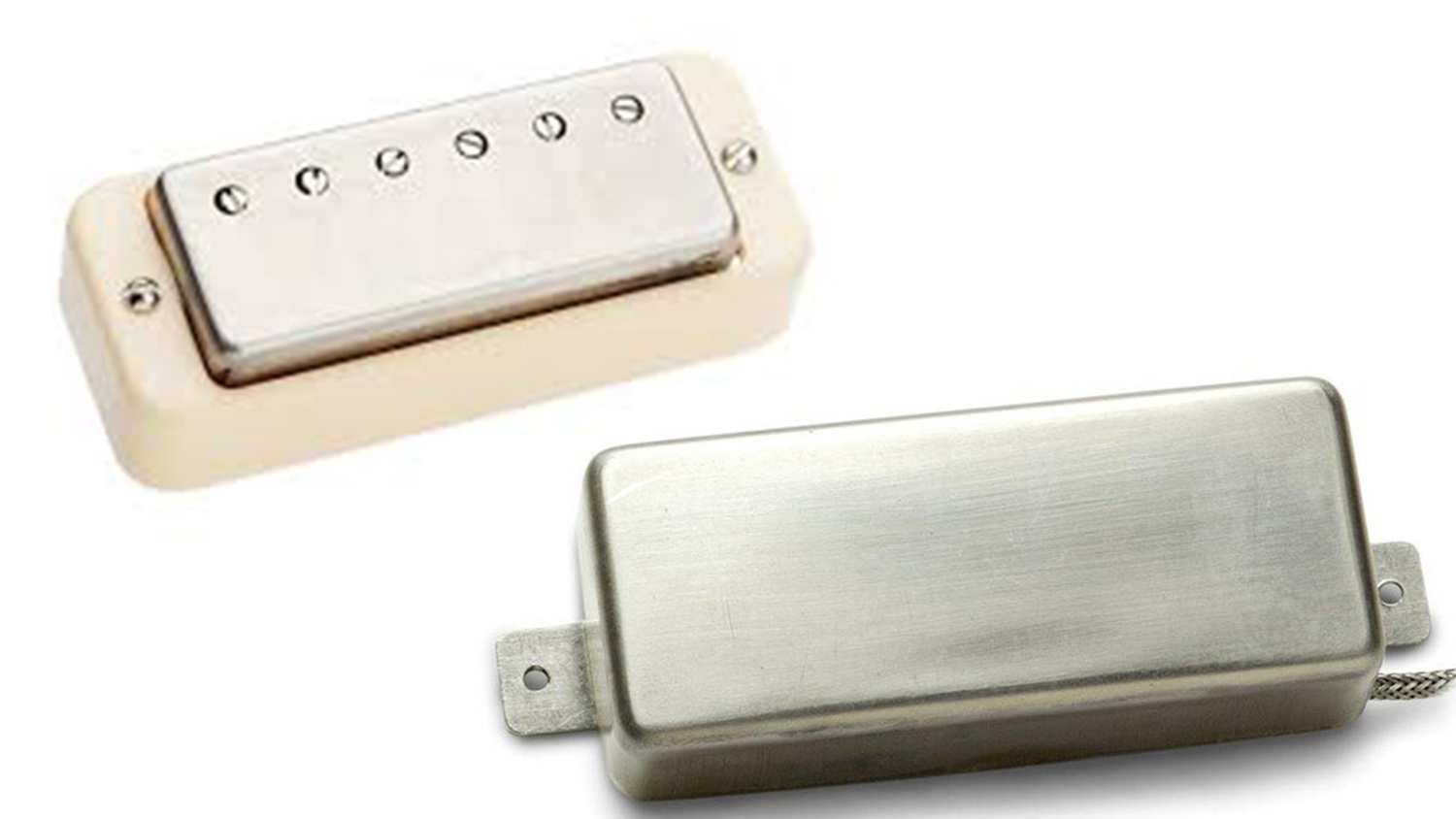 Everyone is familiar with Seth Lover’s humbucker design, but Gibson innovated a few other types as well. Just as beloved as they are esoteric, the “mini humbucker family” consists of three types – mini-humbuckers, Firebird, and Johnny Smith. The narrower width picks up less string vibrations and produces a brighter and tighter sound than regular humbuckers. This is due to it registering higher harmonics of the strings. The mini design has a bar magnet under each coil, but Firebirds have a bar magnet in each coil.

Minis have a buttery attack and good sustain, Firebirds have a lot of spank that pairs well with cranked amps, and the Johnny Smiths are a nice hybrid of both in tone and design. These types of pickups weren’t very popular when they were first introduced but have seen a resurgence in interest recently.

Find the Pickup That’s Right For You

Pickups are one of the biggest determining factors in how an amplified guitar sounds. There really aren’t any limitations anymore. Once annoyingly noisy single-coil pickups are now mostly silent, and humbuckers can fit into a single-coil body route. No matter what kind of guitar or pickups you prefer you can find the tone you’re chasing. It really comes down to play-testing and experimentation to find what’s right for you, but isn’t that part of the fun?

The Fender Acoustasonic Stratocaster is now available for purchase

Fender broke new ground by revealing its new 'Acoustasonic' series of guitars with a Telecaster last year. Now, a new Stratocaster model has been announced.

Finding a great guitar can be very daunting if you're just starting out, because of how many options there are. Here are the best guitars for beginners.

Having your rig “at your feet” is a growing trend among guitar players. Here are five of the best clean amps for pedals.