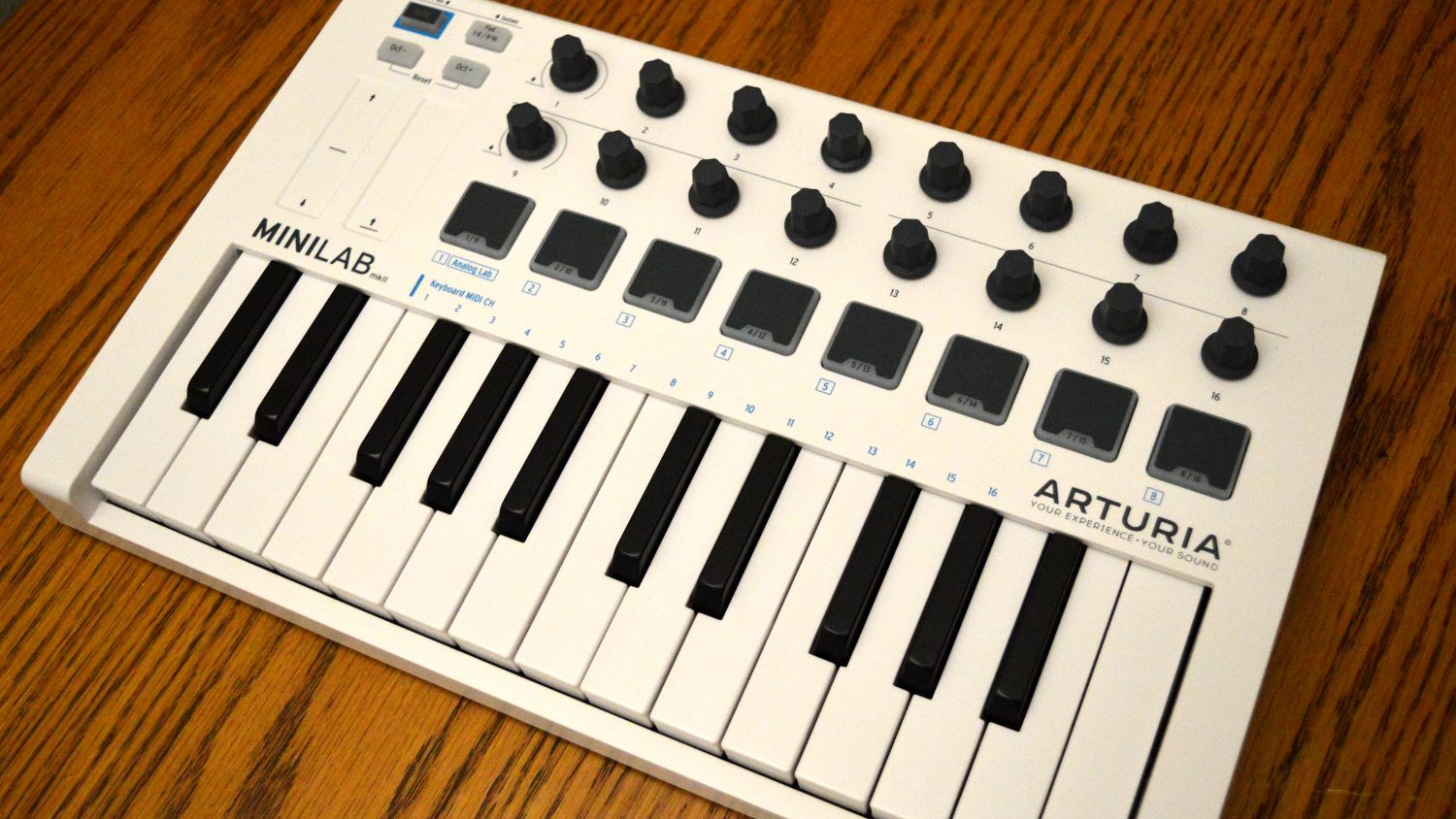 We’ve reviewed a ton of Arturia gear over the years, including the much-loved and highly respected KeyLab 49, the super functional and comprehensive Beatstep Pro, and even the analog MicroBrute SE. Now Arturia’s back at it again, and has launched the Arturia MiniLab MKII, the follow-up to the ultra-portable MiniLab.

But just how does the new MIDI controller compare? We put it to the test to find out.

For this review we’re using a 2012 Retina Display MacBook Pro and Pro Tools 11 — so just keep in mind that the setup may vary a little depending on your setup. 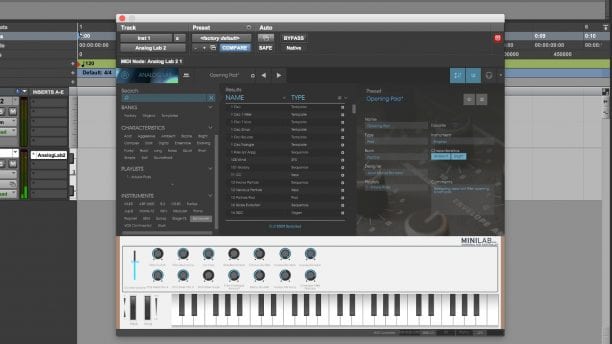 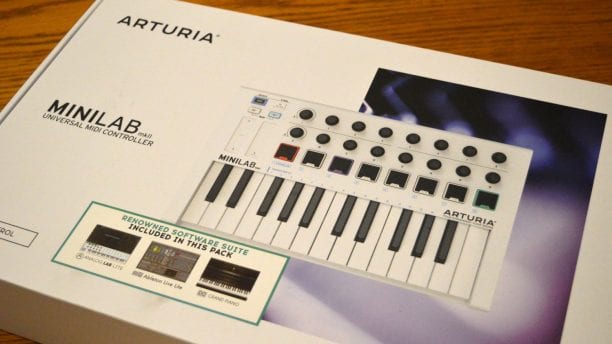 Setting up the MiniLab MKII was actually quite a breeze. If you don’t already have an Arturia account, you’ll need to create one, after which you can simply enter in the registration code and and “unlock code” to register the device to your account. With the MiniLab MKII, you’ll get Arturia’s Analog Lab Lite, as well as Ableton Live Lite, the UVI Grand Piano, and Arturia’s MINI Control Center. That’s not a bad little bundle, especially considering the fact that it all comes with a controller that costs less than $150. The installation of all of those pieces of software is very straightforward, and they’re all downloaded from your account after you register.

Now onto the design. Arturia has gone a slightly different route than previous MIDI controllers, which far more heavily featured wood — in fact, the entire side of the keyboards was made of wood. While that looked great, it’s well and truly time for Arturia’s controllers to evolve, and the MiniLab MKII is the embodiment of that. Yes, you’ll still get the wooden accents, but they’re far more subtle — and, dare we say, classier.

Simplicity is the key behind the Arturia MiniLab MKII — it’s sleek, stylish, and even the software that it uses — Analog Lab 2, is a lot sleeker than its predecessor. Just because the keyboard is simple, however, that doesn’t mean that it doesn’t have a lot to offer. With 25 keys, 16 knobs, and 8 pads, Arturia really seems to have hit the sweet spot between functionality and portability. On the top left of the keyboard, you’ll also find a pitch and modulation wheel, as well as a pad switch button, which lets you change from pads 1-8 to 9-16, and octave up and down buttons — which are super helpful considering the size of the keyboard. 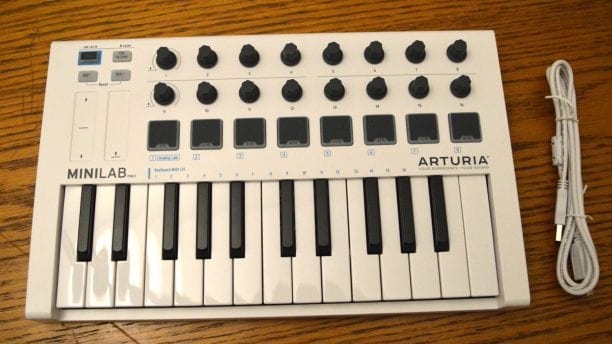 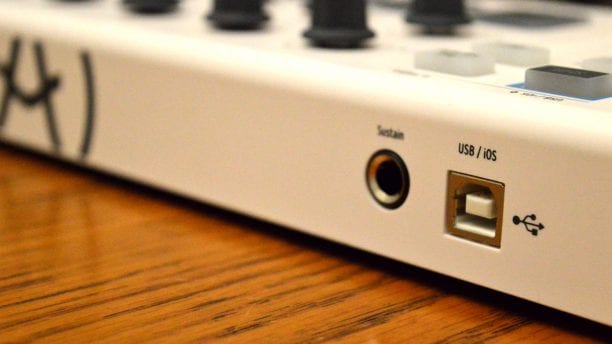 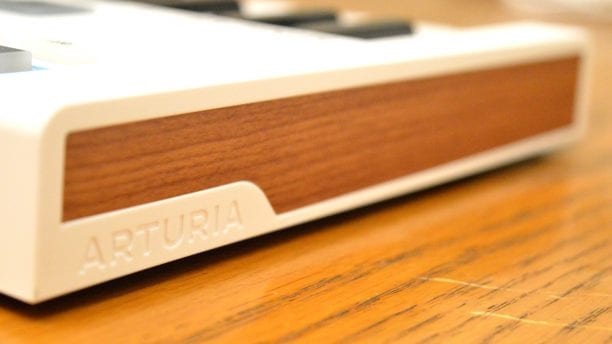 That idea of simplicity is carried on over to the number of ports available — in fact, you only get a USB port and a sustain port. It might perhaps have been nice to get some MIDI ports too so you can control sounds that aren’t on your computer.

It’s clear that the MiniLab MKII is aimed at portability, but we can’t help but wish Arturia included a carry bag of some kind in the package, like it did with the MicroBrute SE we reviewed. That would really help push it over the edge in making it super portable, and while it may have been excluded for cost-cutting purposes, we think making the device an extra $10 or so would have been worth having a carry bag.

When it comes to the feel of the keyboard, there’s no denying that the MiniLab MKII feels like a MIDI keyboard — not a piano or anything of the sort — but it still feels quite nice. The keys are a little small, but that’s obviously to help make the keyboard more portable, which is a good thing.

The keyboard itself really is only half of the package you’re getting when you buy the Arturia MiniLab MKII. The other half is all that software.

For starters, you’ll get a “Lite” version of Arturia’s Analog Lab 2 software, and while lite it’s still pretty damn good software. It gives you access to a hefty 500 sounds in a beautifully designed and modern software. Of course, the non-Lite version is a ton better — for a $29 upgrade, you’ll get access to a whopping 5,000+ sounds, which is very nice indeed. Part of the awesomeness of this software is that all the controls on the MiniLab MKII is already mapped up, so you can really just plug it in and start playing. 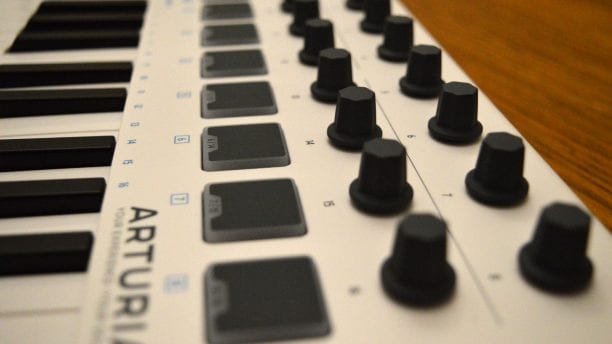 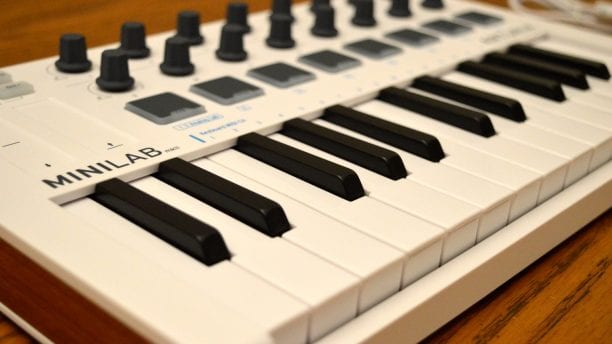 Ableton Live 9 Lite is also included in the box, giving you a taste as to what Ableton Live can really do. It’s clear here that the goal of this is to get you hooked so you upgrade to Ableton Live 9, but it’s nice that you can try it out a little to see if it’s for you nonetheless.

Last but not least is the UVI Grand Piano Model D, which is a pretty decent-sounding piano. No, it’s not the most amazing piano plugin ever, but it’s a pretty solid start and a nice addition to the bundle.

Arturia has hit a home run with the Arturika MiniLab MKII — the device is small, light, and portable, yet powerful enough for most on-the-road musicians who just want something to doodle around with and jot down some ideas. If you’re a musician who really needs to work your software instruments and is into more complex producing, then this may not cut it for you, but for everyone else, the Arturia MiniLab MKII is a steal at between $99 and $129.