[vc_row][vc_column][vc_column_text el_class=”textbox”]Antelope Audio is slowly but surely building up a name as a serious competitor in the pro audio world, and the past few years have proven to show that it won’t slow anytime soon. In 2017, the company took the wraps off of the new Antelope Audio Orion Studio HD, a new interface that can connect and be used with Pro Tools HD, but also with Pro Tools Native through HDX and USB 3.0 connectivity.

Of course, the interface goes far beyond simply connecting to a DAW. It also boasts a hefty 12 mic preamps, 16 analog outputs, and makes use of Antelope Audio’s new A/D conversion chips that the company claims will deliver up to 124dB of dynamic range. That’s no small feat.

But in this price range there’s some serious competition. Universal Audio, Apogee, and Focusrite all have their own pro offerings in the $3,000 market. Is the Antelope Audio Orion Studio HD full-featured enough to be the go-to? We put it to the test to find out.

To be sure, design is rarely if ever as important as sound quality in the studio, but that doesn’t mean companies shouldn’t put an emphasis on great design anyway. Antelope Audio seems to understand that — the Antelope Audio Orion Studio HD is sleek, stylish, well-built, and should fit right at home amongst either well-designed equipment on a rack.

The front panel of the interface offers plenty of features, but it doesn’t feel overly cluttered or difficult to get used to either. If you can’t figure out how to use it yourself, the manual is also well laid-out and easy to understand, as long as you have a basic understanding of studio recording — though if you’re buying a $3,000 interface you probably do. 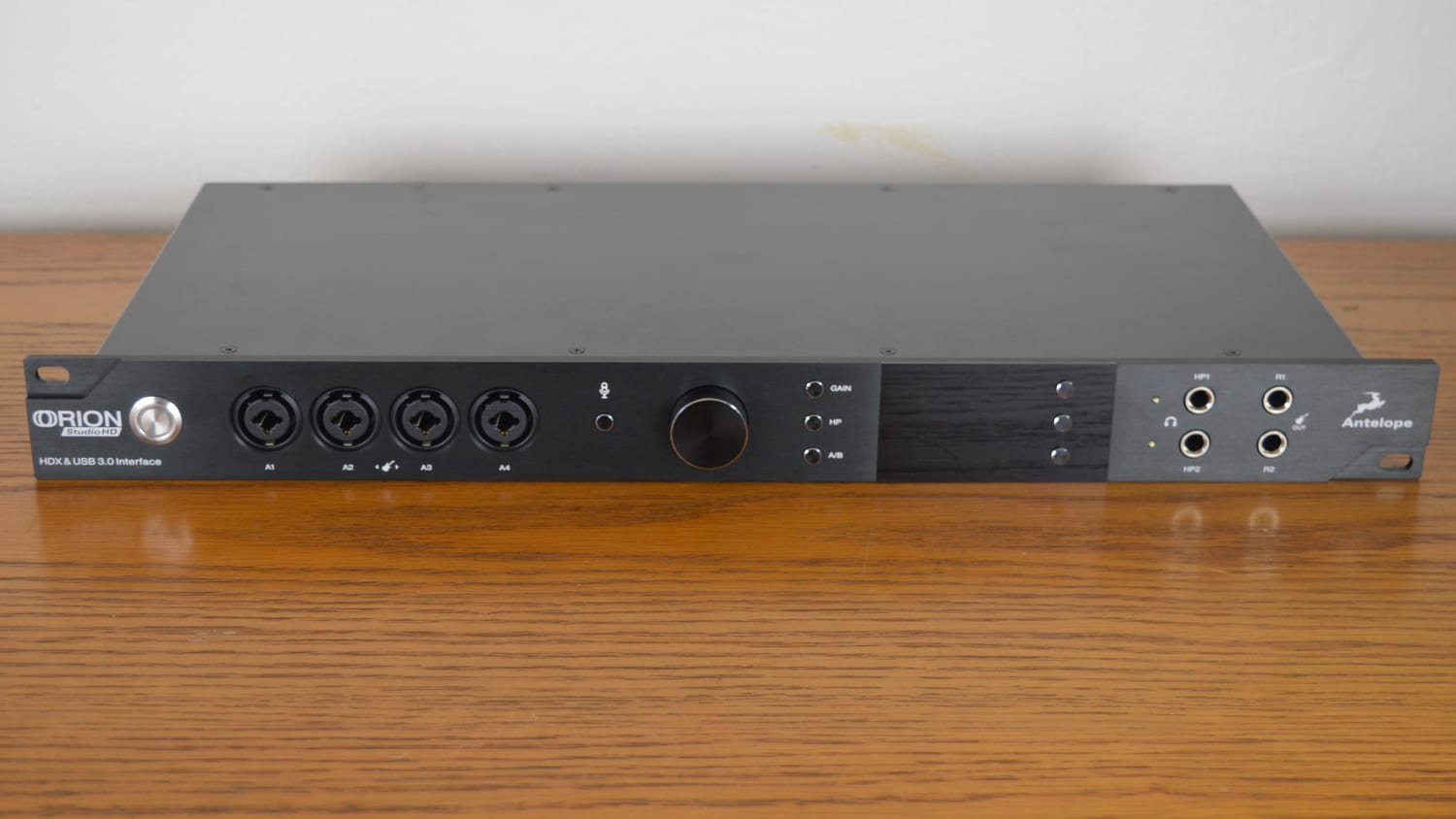 Besides the power button and first four mic inputs, you’ll find a talkback button, a main knob that’s used for both gain and user interface controls, other user interface control buttons, two headphone outputs, and two re-amp outputs. That last feature is a nice touch — especially on the front of the device. It should enable for far easier re-amping.

The LED display is how you’ll interact with the interface’s internals, and while it takes a few minutes to get used to, once you understand how the buttons and controls work it’s pretty easy. There are a total of six buttons, and the main knob can be pressed in as a selection button. For example, to control the gain for the different mic preamps, simply hit the “gain” button, use the knob to toggle between the different mic preamps, press the knob to select, then twist the knob to turn up or down the gain. The “HP,” or headphone button allows you to toggle between the two headphone outputs and control the level of each, while the AB button lets you toggle between the two monitor outputs. 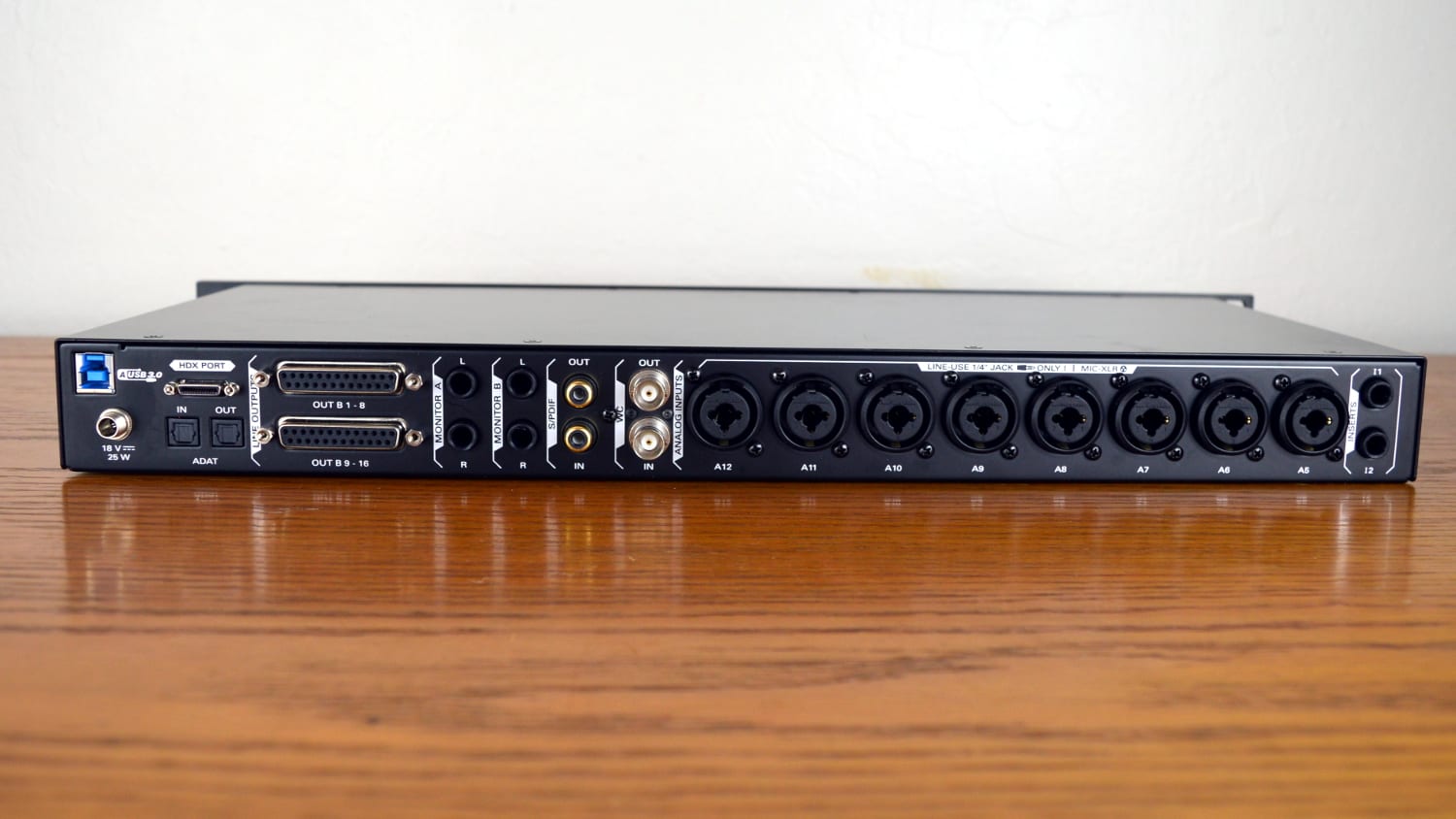 We’re not here to give a total run down of all the controls, but if you get nothing else from this design section, at least know that the interface is simple to use, with the ability to delve into settings if necessary. That’s a good thing. We think Antelope Audio has nailed a simple front panel.

The back of the interface is where you’ll find the majority of inputs and outputs — as expected. You’ll get mic preamps 5-12, the USB and HDX ports, two D-SUB outputs, word clock input and output and so on. There’s really everything you should need here for a small to medium-sized studio, though larger studios may need a little extra.

The software is generally pretty easy to use too. The top of the software interface remains the same — showing the 12 mic preamps with options to switch between mic, line, and hi-z, the ability to turn on and off phantom power, clock source, and so on.

The rest of the user interface is split into six screens — Routing, Mixer, Effects, HDX, Trim, and Meters. Those sections are pretty much exactly what they sound like. You’ll get a virtual patch bay in Routing, the ability to set your FGPA effects in Effects, and so on. You can save everything nice and easily too — which is a pretty necessary feature. You don’t want to have to recall your Antelope Audio session the same way you would an older console.

It’s all well-designed and easy to use. We did have a few issues with the interface and software not connecting properly, even after following the instructions on Antelope Audio’s support pages — but after a few minutes on the phone with tech support, those issues were solved.

Perhaps far more important than the design of the interface is what’s under the hood. First and foremost is Antelope Audio’s Field-Programmable Gate Array — or FGPA. The FGPA is basically a chip in the interface that can process effects in real-time — like the company’s EQs, compressors, and so on. 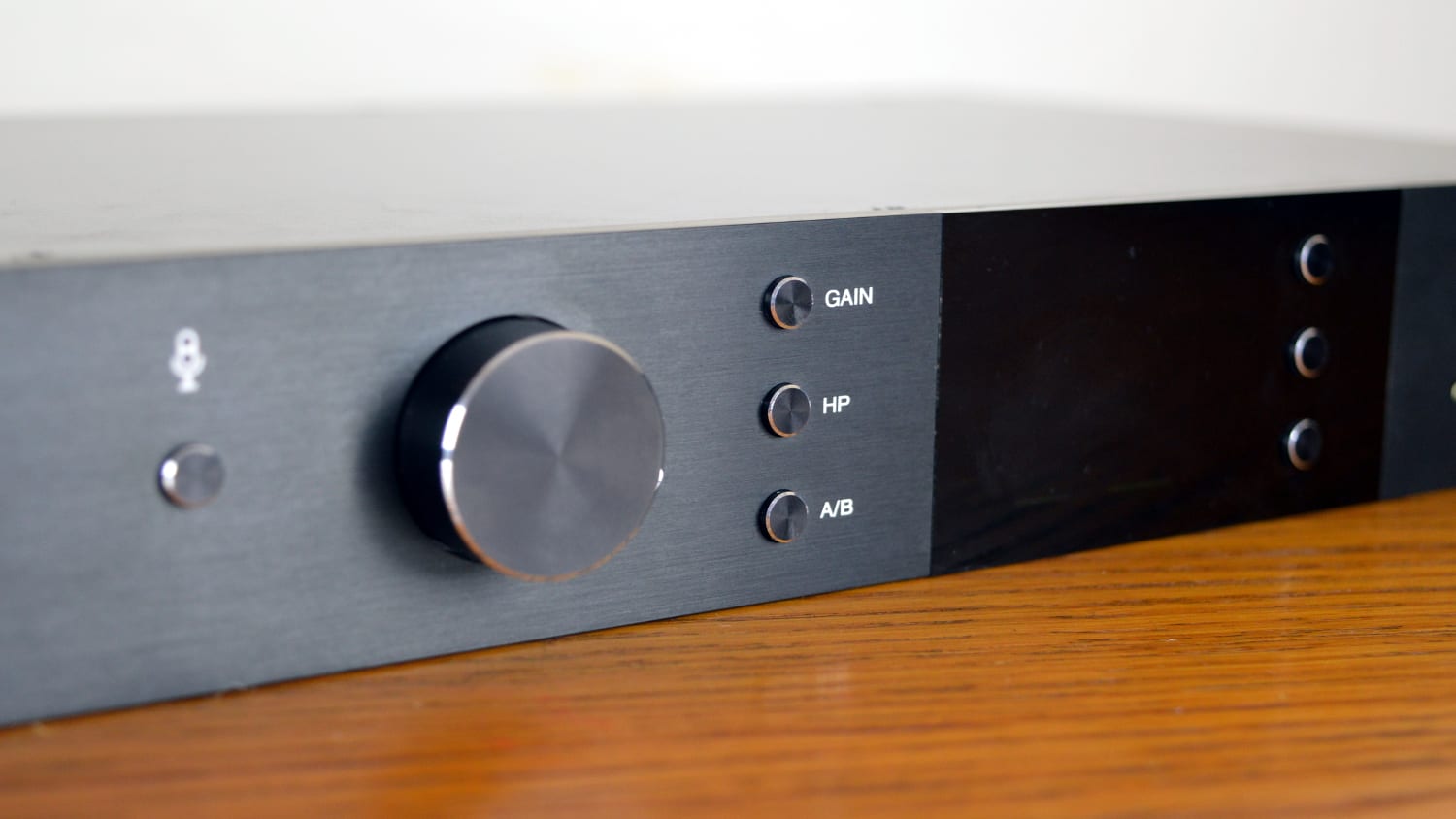 What’s the point of that? Well, the effects are basically processed on a hardware level. The effects are processed, from your computer’s perspective, like hardware — meaning its far less taxing on the computer as a whole. The downside there is that instead of settings all being saved in Pro Tools or your preferred DAW, you’ll insert the effects as hardware effects and save your session in the Antelope panel, which is also where you’ll tweak the settings of the effects. For some, that’s a little impractical — though the advantages of the excellent-sounding effects were definitely worth it for us. That’s not to say we don’t want the ability to tweak settings in Pro Tools. Hopefully that’s a feature that will show up at some point soon.

The Antelope Audio Orion Studio HD also benefits from Antelope’s 64-bit Acoustically Focused Clocking — or AFC — jitter management algorithm. Antelope Audio has become pretty renowned for its clocking technology over the past few years, and for good reason. The short of it is that the tech will basically help make the interface extremely stable and give audio a nice high level of clarity.

As far as recording goes, the interface is capable of audio at 24-bit and 192kHz — which should be more than enough for most use cases. Audio can be recording through USB 3.0, MADI, ADAT, S/PDIF, HDX, and DB25.

So how does the interface sound? After all, that’s the most important thing. The Antelope Audio Orion Studio HD sounds fantastic. The class-A preamps boast a hefty 124dB dynamic range, which should be more than enough for the vast majority of users.

Perhaps the best thing about the interface is that there’s a ton of clarity in the high end, and the converters are clearly high-quality. This sound section is going to be short, but rest assured, that’s a good thing — the Antelope Audio Orion Studio HD sounds great, and can easily hold its own against more expensive interfaces.

Antelope Audio has hit a real home run with the Antelope Audio Orion Studio HD. The Interface is classy and well-designed, easy to install and easy to use, and sounds great. Of course, it is a bit pricey — though for the price we’re not sure you could do much better. There are other high-quality audio interfaces in this price range, though none of them have 12 mic preamps, and that could be a big deal for some.

In the end, the Antelope Audio Orion Studio HD is a serious contender with a lot to offer. It looks great, sounds awesome, and boasts plenty of features that others just don’t.

Sound Devices has taken the wraps off of two new audio interfaces -- the MixPre-3, with three inputs, and MixPre-6, wth six inputs.

Looking to get started in home recording or building a small studio? Here's everything you need, including an interface and microphone.