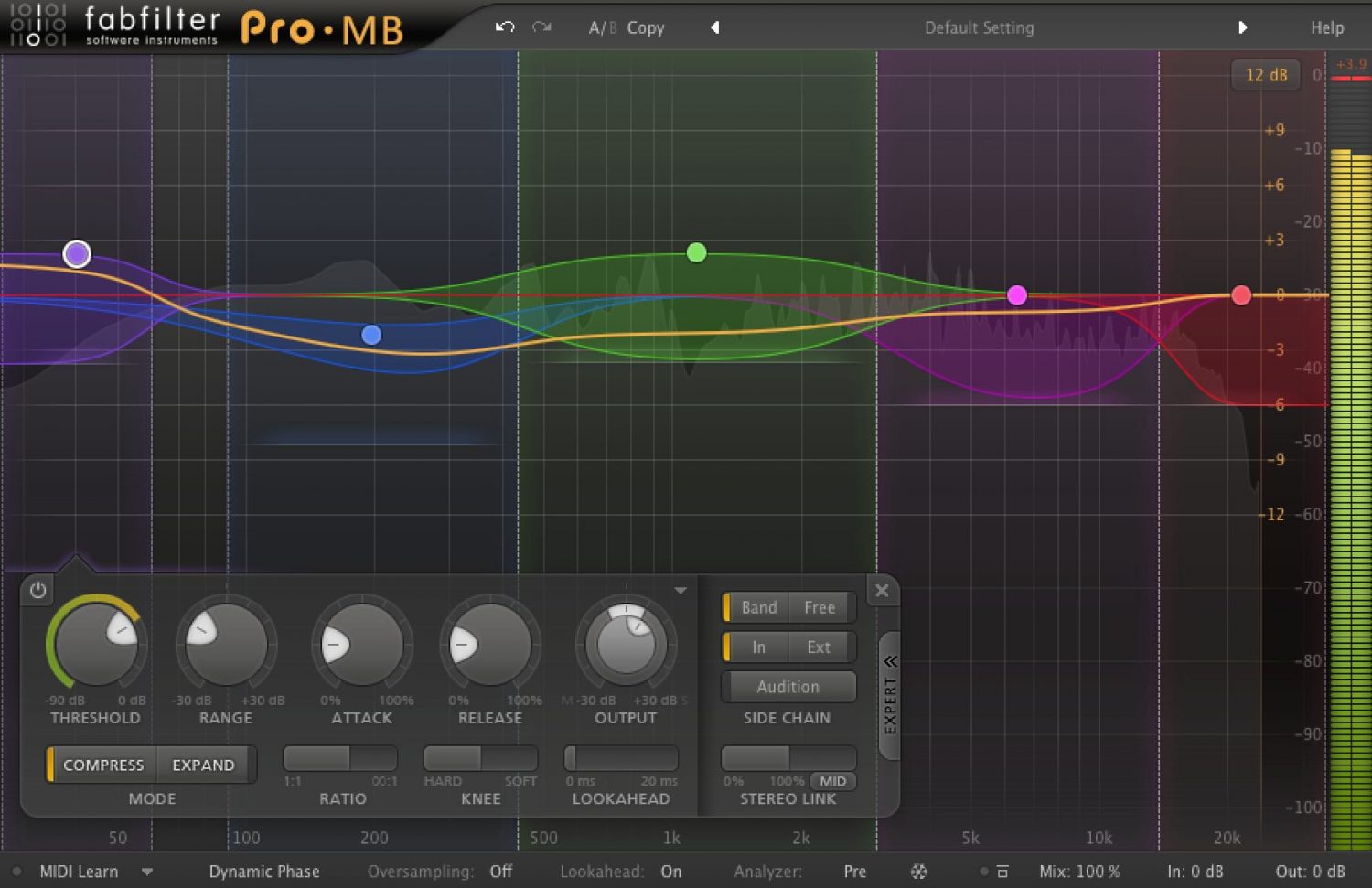 A couple days ago we introduced you to the FabFilter Timeless 2, a beautifully well designed delay plugin. Now it’s the Pro-MB’s turn. As one of FabFilters more recent plugins, I was very excited to test drive the new Pro-MB (ok, so it was released a few months ago…). I’d been on the hunt for another multi-band compressor to add to my plugin list, and I’d also read a lot of great reviews about FabFilter‘s plugins. I was excited to see if it would live up to the other ones I’d used in other studios.

The first thing to notice when you open up the plugin is the clean interface. I mean the really, beautifully clean interface, looking almost like it’s missing things because of how clean it is. Not only is it clean, but it’s classy. FabFilter really outdid themselves with the user interface here, and it’s not at all intimidating upon first opening it up, but you can tell that it has some power under the hood.

I mentioned before that it looks almost like it’s missing things. Trust me when I say it is NOT missing things. As soon as you start playing audio you’ll notice the spectrum analyzer kick in, which is shown in the background of the user interface. You can adjust the speed and resolution of its analysis to save CPU if you so desire.

The plugin has up to 6 bands. To activate a band, you simply click at which frequency you want it to reside on the yellow 0dB line. Once you do that, a window will appear with your controls, including threshold, range, attack, release, and output. You can also select whether you band that band to be compressed or expanded, the ratio, the knee, and how far you want it to look ahead. Or, if you want you can use a preset by clicking on the little down arrow in the top right hand corner of the window. Sounds pretty straightforward, right? Well that’s because it is. But there’s so much more to it.

The frequency spectrum of any particular band is shown by the color coded tint that it’s given. This can be manipulated by using the control outlined above. There is also a dotted line showing where the bands cross over, and this line can be dragged left or right to determine where you want the limits of the band to be. You can merge limits, and you can split them. Not only that, but you can also mute or solo any specific band or bands, and you can change how strict you want the slope to be of the rolloff, by dragging the aforementioned dotted line up or down.

To the right of any frequency’s control window, there is a button that says “Expert”. Open that up, and you have controls for side-chains, as well as a stereo link option, which is a very nice addition.

At the bottom of the screen there are even more controls, mostly related to the spectrum analyzer and how it works. There’s also a MIDI Learn option, different phase modes, and the ability to change the wet/dry mix. This plugin has absolutely everything.

The sound of the plugin is also very nice. I was surprised at how transparent it was, and at the start I actually had to check if I had everything set up correctly. Once I dug more into the plugin, I could hear it’s sound and it sounds as good as it looks. It’s very subtle, yet it does the job well.

The FabFilter Pro-MB comes in any format you should want it to come in (VST, AU, RTAS, AAX), and it comes at a great price of only $229, which really isn’t much for a plugin of this caliber. Or, if you purchase it before the 24th of April 2014, you can take advantage of FabFilters 10th anniversary sale and grab it for only $137, which is an absolute steal for this plugin. I wholeheartedly rate this plugin a 10/10.