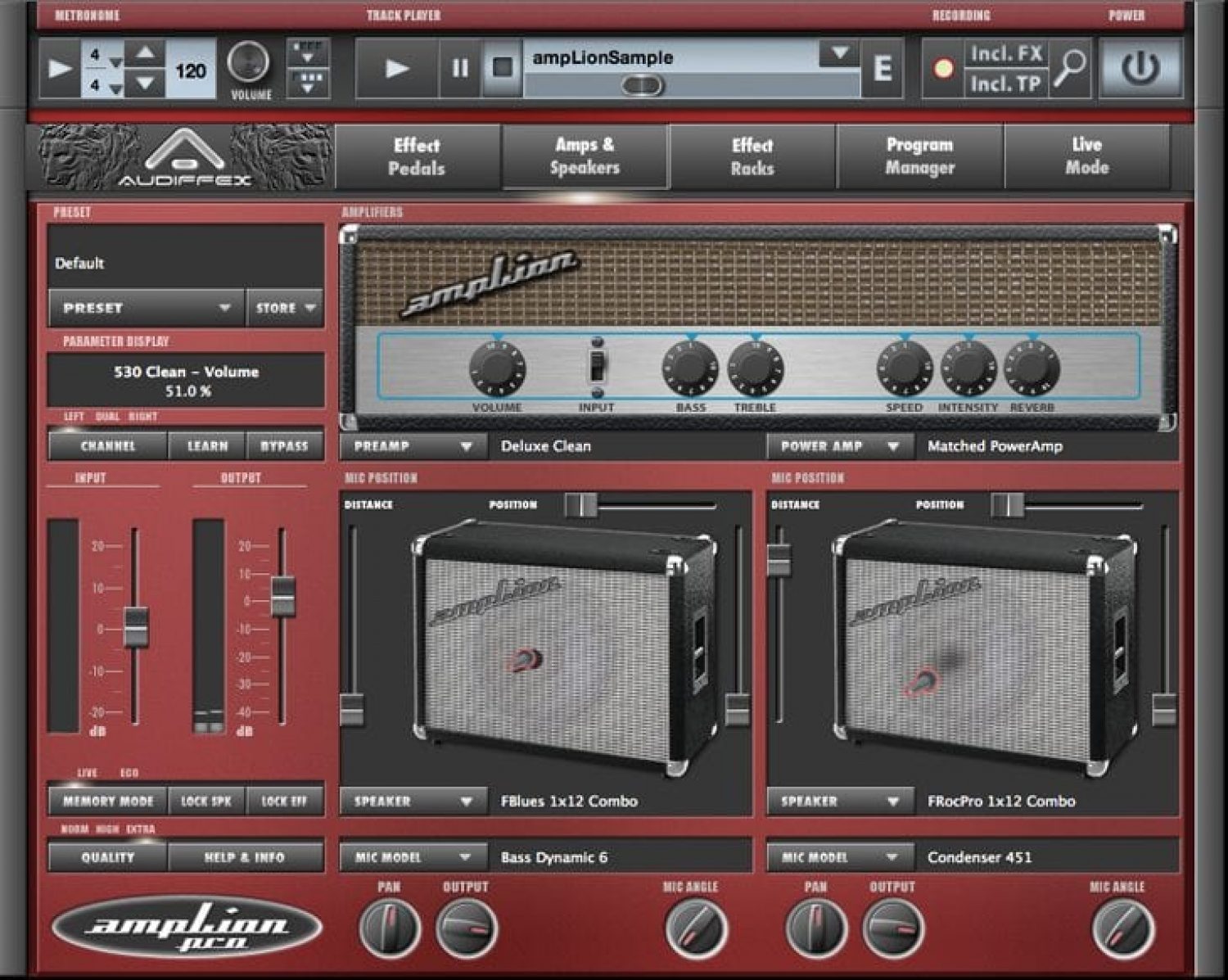 Audiffex recently updated their guitar amp modeling software, AmpLion, to version 1.1, sparking a fresh wave of interest among those searching for a new multi-effects and amp modeling plugin. We took this opportunity to review the new plugin.

AmpLion 1.1 boasts a number of great features, amps, effects, and so on. Read on to find out more!

As usual, the first thing that one notices when opening a new plugin is the user interface. In the case of AmpLion, I personally have mixed feelings about the plugins interface.

The good news is that the plugin is laid out in a way that is extremely easy to use. Tabs at the top of the interface allow the user to toggle between effects, amps, the effects rack, the program manager, and the “Live Mode.” Effects are visually represented as pedals, and the sound is changed the exact same way they would on a real pedal – simply by turning the knobs. In the case of amp mics, users can move the microphone on an x and y axis, with a visual representation again showing the placement of the microphone.

The range of effects in AmpLion, while not extensive, certainly sounds good. Audiffex certainly made a point of stocking the plugin full of drive effects, but stopped short of adding the same number of other effects.

As mentioned, AmpLion has quite an arsenal of drive pedals, including emulations of the ProCo Rat, Boss OD-1, Boss SD-1, Ibanez Tube Screamer 9 and 808, and so on.

As far as other effects go, AmpLion includes emulations of two Boss chorus pedals, an Electro-Harmonix Small Stone phaser, three Electro-Harmonix flangers, a Boss tremolo, and a Boss delay. While Audiffex probably could have gotten away with not having many modulation effects, a bit more effort in the delay department might have been nice.

The amp selection is a little bit of a different story. There are a number of amp models and they sound awesome. According to the AmpLion website, Audiffex “unscrewed every last screw from every modeled amp and measured every part of it.” I believe it.

The plugin includes a number of classic Fender, Marshall, Mesa Boogie, and Engl preamps and power amps, and they sound awesome. You can check out the full range of amps on the Audiffex website.

One of the things I like about the amp selection in AmpLion is the versatility that’s represented. There’s really an amp for every situation here, which I think gives AmpLion a lot of value. Versatility is an important part of any plugin, and as far as amps so AmpLion does great.

The range of cabs in AmpLion is just as extensive and versatile as the range of amps. Once again the amps include emulations of popular Fender, Marshall, Mesa Boogie, and Engl, as well as Line 6 cab thrown into the mix.

Another great thing about the plugin is the visual representation of the micing of the cabs. It’s easy to place microphones by simply moving them with the controls provided.

The microphones include emulations of the Shure SM57, Audix i5, Rode NT1-A, AKG C1000, AKG C451, Sennheiser MKH40, Audix D6, and AKG D112. A small but, again, versatile selection of microphones providing users with the ability to create almost any tone possible. On top of that, users can use two cabs at the same time, with different microphones choices and placements, if wanted. This allows for even more possibilities.

AmpLion 1.1 is clearly a special plugin. While it is true that I would have liked to see more on the effects front, judging by the name of the plugin, effects aren’t the focus of the plugin, and effects won’t be the reason to buy the plugin, as good as they sound. The focus of the plugin is clearly the amp portion of it, and in this Audiffex does a great job. While the plugin isn’t the prettiest in the world, the interface shows ease of use. The selection of amps shows quality and versatility, and anyone looking to find a good amp simulator can’t go wrong with AmpLion.