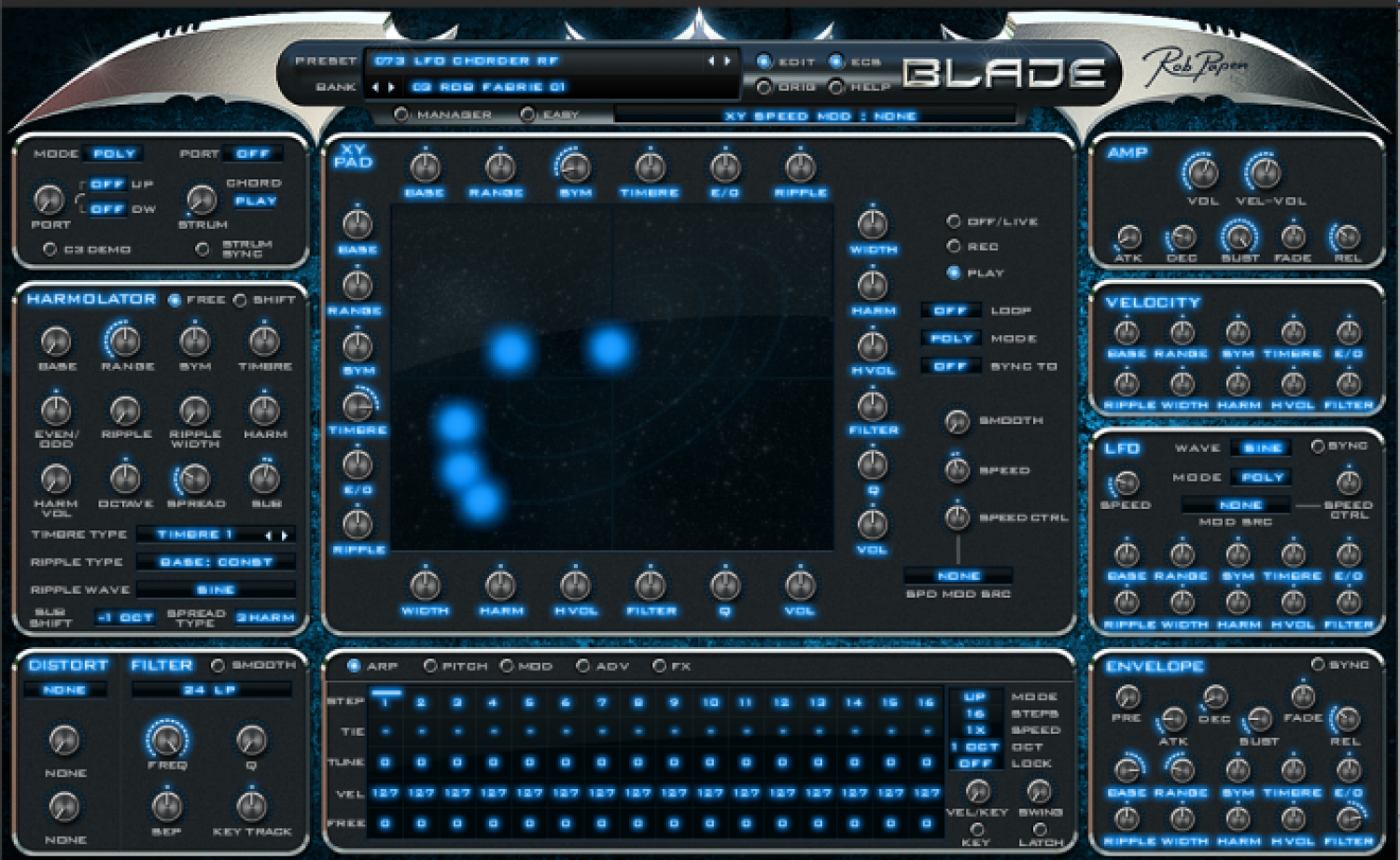 Rob Papen recently released their eXplorer-III plugin bundle, which included a number of great instruments and effects processors. We will be reviewing each of those plugins, with the first of those being the Blade synthesizer, which is a highly comprehensive, complex, additive synthesizer.

Blade is an additive synthesizer that was originally aimed at being a more obscure synth. Despite this, if you are familiar with how additive synthesis works, it shouldn’t be too hard to learn Blade.

Upon opening up the synth, it can be quite daunting. The user interface looks good, but is not stunningly beautiful, and can seem a little intimidating. Thankfully, even if it seems like a lot to learn, the plugin has an easy mode which greatly simplifies the options available on the synth.

While the synth does look quite complex, it helps that it is divided up into sections. Upon opening it up, you will see that there are a total of nine different areas, including “Harmolator”, “Amp”, “LFO” and so on.

The Harmolator is essentially the key oscillator of the synth. Rather than have controls for all 96 of the partials in Blade, the Harmolator controls all of them. It basically allows you to control the synth without getting too deep into how additive synthesis works.

The X-Y pad on the synth is a thing of genius. The X-Y pad, which is located in the center of the screen, offers a number of controls, and is a visual representation of the sounds compared to each other. Not only that, but it’s really easy to record movements on the synth, and this can be done through the mouse or through MIDI.

Blade has up to 16 voices, a 16 step arpeggiator, 14 filter types, and 21 distortion types per voice, making for quite a comprehensive synthesizer. If all these controls are too much, as mentioned before there is an easy mode, or you can take a look at the presets that come with the synth, which there are a lot of.

The synth itself sounds awesome. The amount of different sounds that can be made with it are huge, each one having its own intricate characteristics that make it unique.

Blade easily gets the shimmering digital sounds that many want out of a synthesizer, and often is sounds quite metallic, which, in this case, is good. The different timbre types which can be selected essentially decide which partials will be present, and these partials are controlled, as mentioned before, by the Harmolator.

Obviously we can’t cover an in-depth synth like Blade in the space of one review. The multitude of possible sounds make it very versatile, and the sound of the synth is awesome. While a little intimidating to learn in full, if learned and used to its full potential Blade can be useful in any studio setting.

Blade is available as a standalone synth here, or you can get it as part of the new eXplorer-III bundle here.

The new Kyra synth from Waldorf is finally here