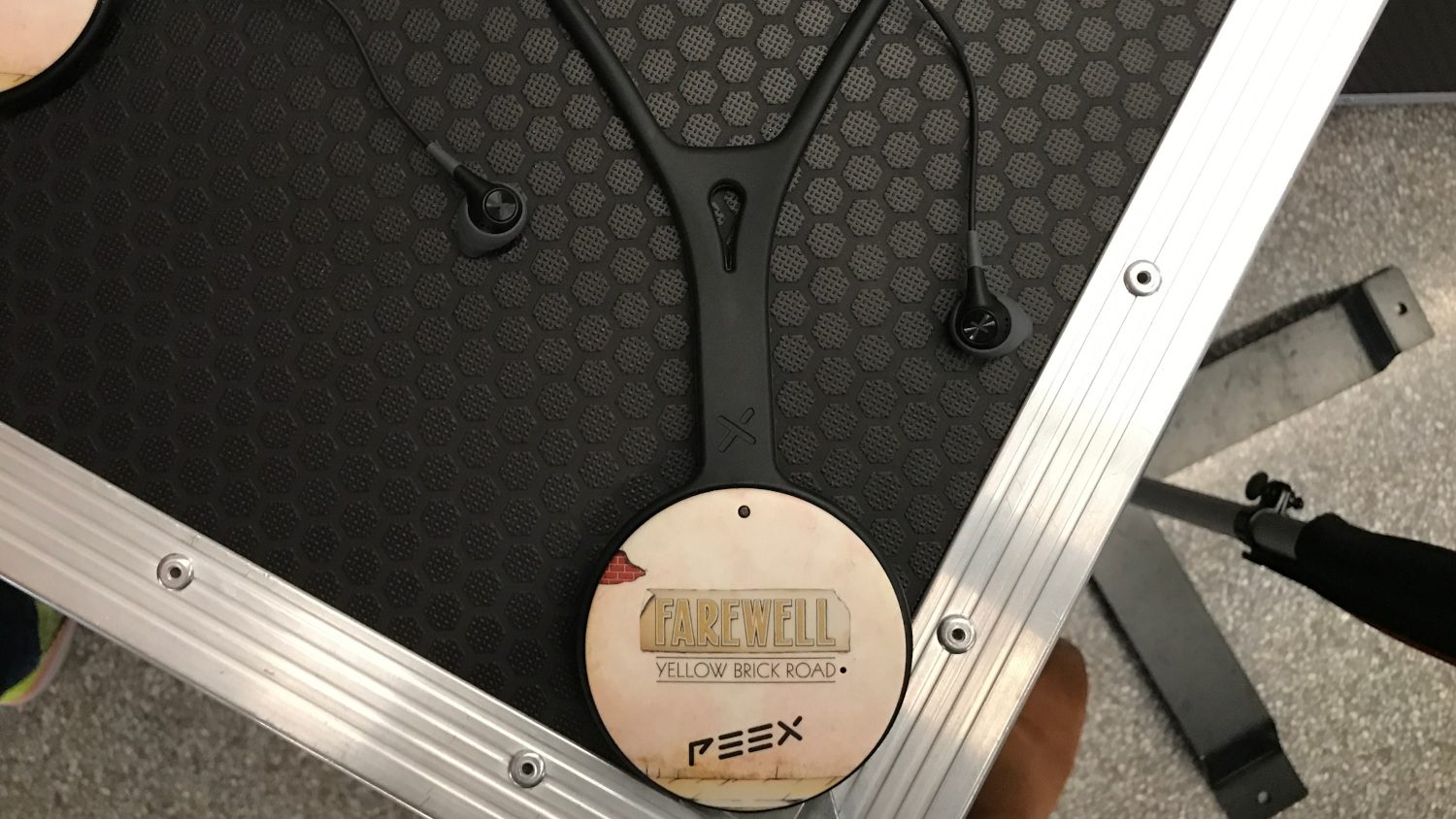 After parking my car near the arena, making my way through security, and finding my seat, the concert finally started. All the musicians, of course including Elton John himself, are long-time experts in their field. “Only one problem,” I thought as the music began — “I wish I could hear the bass a little more clearly.” With that, I pulled out my phone, and turned the bass up myself — so I could perfectly hear the detail on those strings.

This is the promise that Peex delivers at concerts on Elton John’s Yellow Brick Road tour. With Peex, you’re essentially put behind the mixing board — so that you can mix the sound to your liking. It’s an interesting concept — but during the concert I found that it was more than just interesting. It meant that I could tailor Elton John to sound, in real time, exactly how I wanted hime to sound, and that sound was delivered straight to a pair of headphones that I wore during the concert.

Now, before you audio engineers and music producers get too excited, it’s important to temper expectations. With Peex you do not have control over the entire mixing board on your phone. Instead, you’ll get five channels, which are basically a combination of sources straight from microphones on the stage. Channels themselves are labelled Vocals, Guitar, Keys, Bass, Drums. Of course, that’s a good thing — not only does that prevent some of you from spending the entire concert trying to perfect that mix, but it also ensures that the average Joe can quickly and easily tweak the sound to their preferences without too many issues.

I know what you’re thinking — “why would I want to wear a pair of headphones during a concert.” The thing is, the headphones themselves are tailor to the experience. They’re a pair of in-ear headphones, and they were specifically chosen for their ability to let in outside noise. You see, Peex isn’t about trying to replace the current concert experience. Instead, it’s aimed at augmenting it. Peex’s goal is to take an already stellar sound, created by the professional mixing engineers, and tailor it to the specific user. It also has a bit of an equalizing effect. As many of you are well aware, sound interacts with an environment in very different ways — and the sound towards the front of a show could be very different than that at the back of a large arena. With Peex, you can still maintain a solid sound quality no matter where you sit.

“Sound engineers can’t do a perfect job for every seat. They can do a good job of the sound for all seats, but it’s pretty much impossible to get a perfect sound everywhere,” said Peex co-founder Graham Tull in an interview with All Things Gear. “Peex does at least give you a chance for that. There’s no limit to the number of users — it’s a one-to-many system. The analogy I would often use is that if you happen to sit at the back of the hall, the view of the stage might be less clear, but you have HD video to support it. You could look at Peex as HD audio to support the sound.”

Peex actually faced some pretty interesting technical challenges in implementing its concept. That’s all thanks to the speed of sound. Because the wireless technology being used by the company works faster than the speed of sound, the stream of audio coming to your ears through the headphones actually arrives before the audio from the stage — and that audio can take longer or shorter to arrive where you are depending on your location in an area. Because of that Peex uses a microphone in each and every device that detects where you are in the concert and intelligently syncs the audio in your headphones to what’s happening on stage. It does so with precision too — and the result is a phase-free, real time experience.

“We take a MADI feed of 128 channels. That’s brought into our separate mixing system, and then we create, in this case, the five stem mixes. And those are the mixes that end up being turned into radio waves that then arrive to the receiver,” continued Tull. “A secondary activity that’s vital to the success of this is that the sound wave of the speaker’s traveling through air at the speed of sound, and if you’re 100 feet away there’s roughly 100 milliseconds of time delay. The signal that we’re radio broadcasting into the room is at the speed of light, so the audio that reaches the receiver is in advance of the audio coming from the speakers. If you don’t deal with that you end up with the same sound twice and a time delay. Before the radio broadcast we add to the digital five-channel data metadata about the sound wave that will be coming at some point. We do that by analyzing the front-of-house audio through a succession of signal processing techniques that culminate in creating a digital fingerprint of what the audio looks like.”

It’s important to note that Peex isn’t perfect — though it is seriously cool. If you have a background in music, you’ll notice that you can’t hear ambient noise as perfectly as you would without the headphones in your ears, and there is a little high-end loss from the room. That said, that’s more of a function of the headphones the company is using rather than the actual concept and the tech itself. It would be nice to see Peex continue to refine the headphones it uses. That said, most people won’t notice the difference, and even those that do may not care. The result is a little more room for audio clarity that you otherwise lose in a concert-going experience — and if you make a mix that you end up liking, you’ll still get better audio experience out of it.

So should you get Peex at your next concert-going experience? Well, yes. If you happen to be at a concert where Peex is available, we think it’s worth trying out. For some, the concept of wearing headphones at a concert will be a little much — and others will prefer to just deal with the sound quality in the room. But even for those people, we think it’s well worth experimenting with — and if you don’t end up liking it, you never have to rent Peex devices again.

Peex is available to rent for $15. For now, it’s available at Elton John’s Goodbye Yellow Brick Road tour, but will likely come to other shows and tours in the future. You can rent Peex for yourself straight from the Peex website.