Since its initial line of plug-ins released in 2012, the Waves & Abbey Road Studios collaboration line of emulation plugins copying various pieces of vintage recording and mixing gear in Abbey Road Studios, have gained a lot of traction and popularity amongst users. Now, 6 years later, Waves revealed its newest addition to the family at the Audio Engineering Society show in New York — the Waves Abbey Road TG Mastering Chain. With this plugin, mastering engineers can now perform their work just as they did in the 60s and 70s, with bands like Pink Floyd and The Beatles — and get that warm vintage analog tone added to their final tracks.

The Waves Abbey Road TG Mastering Chain was designed as a digital emulator of the EMI TG12410 Transfer Console, which served as one of Abbey Road Studios’ prime in-house mastering consoles. The plug-in is laid out across two sections, monitoring and effects. The layouts of both are relatively straightforward. 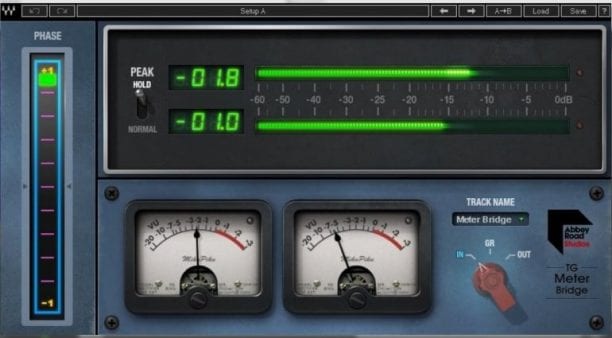 On the monitoring section, a phase meter sits vertically along the left-hand side of the screen, allowing the engineer to monitor phase levels of their tracks, with a green light indicator that dances between +1, 0 and -1 along the meter. The top half of the horizontal parts which take up the rest of this portion contains two stereo sets of volume monitors for each channel — one with digital units reading the peak levels of each channel and one displaying them in the more classically used ‘dancing LED’ monitors. The plugin also allows the user to switch and choose whether to hold the peak volume displayed at any given point, or to let it continue to monitor in real time. Just below it are VU-type meters to provide a vintage spin on monitoring output levels. Finally, a switch to let the engineer determine whether they are monitoring the input level, output level, or gain reduction amount of the incoming signal. 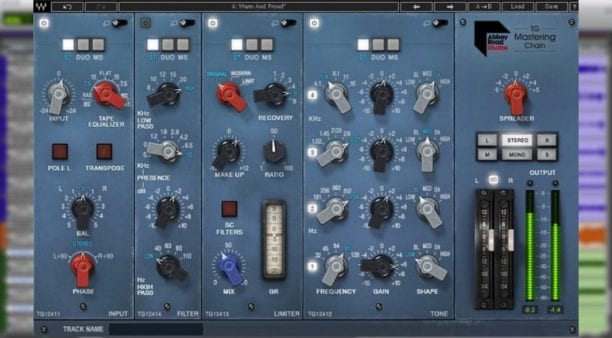 For effects, Waves really packs a punch with what it was able to include in this plugin, as each section – (Input, Filter, Limiter, and Tone) – is an emulation of a piece of vintage hardware equipment from the Abbey Road Studios collection. Each can be engaged individually in any combination, and can also be monitored in stereo, duo or mid-side configuration. At the end, a spreader knob is located alongside 6 buttons so the user can individually solo the left, right, mid, or side channels, or listen to the output in stereo or mono. Just below it are two classic looking faders, and another pair of dancing LED strips.

All in all, Waves truly came through strong with this release. With its versatility, wide range of individual controls, and feather-gentle level of effects coloration, this plugin is not just for the mastering engineer looking for vintage emulation on their tracks — we would suggest that this is a plugin that can be used in their day-to-day effects chain. The Waves Abbey Road TG Mastering Chain has a set price of $199, but for a limited time is available to purchase through Waves.com at a dirt cheap price of just $39. If you are looking for an affordable way to deliver high-quality mastered tracks back to clients, this is definitely the plugin to grab, while it lasts at this price.