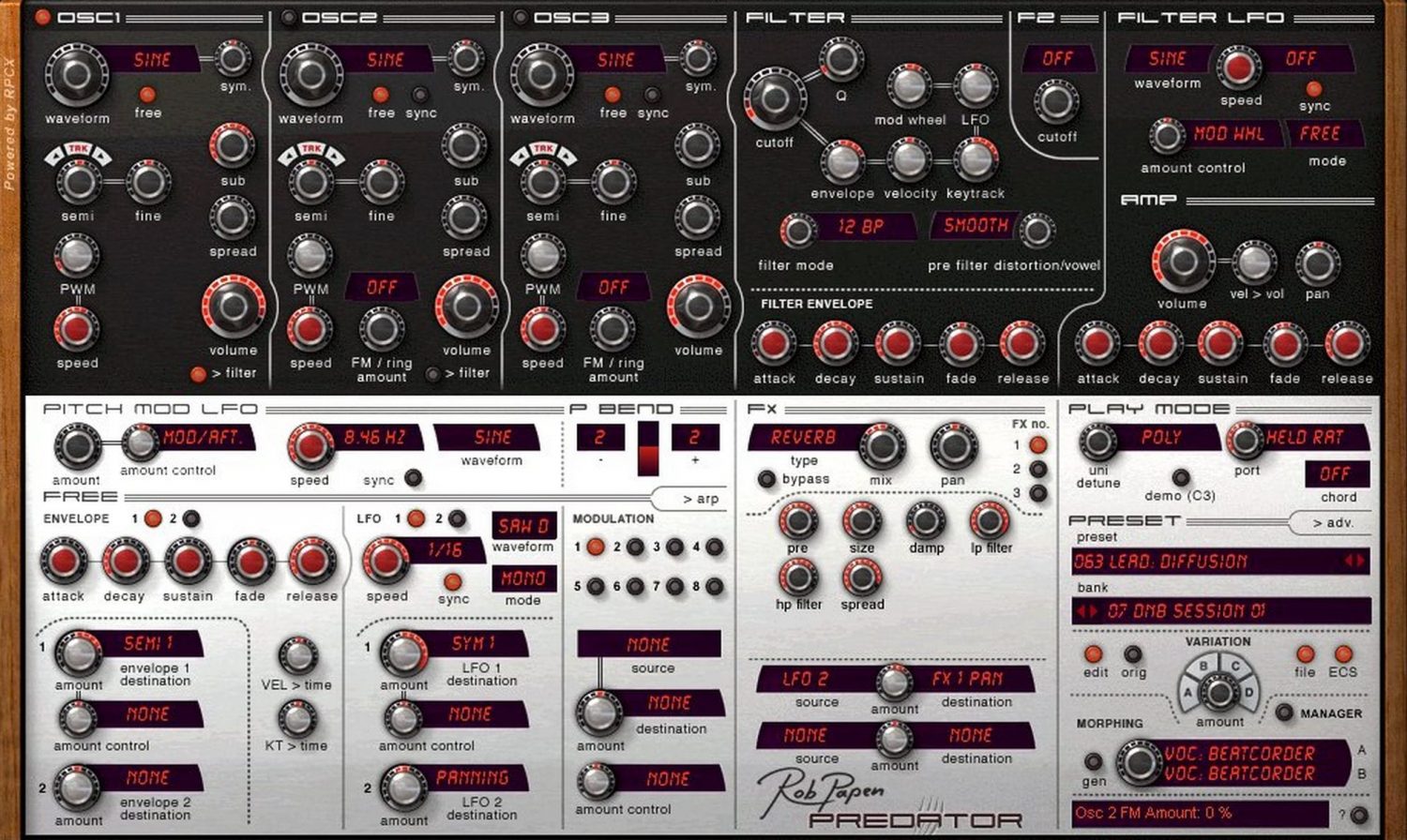 Rob Papen released the Predator synthesizer back in 2007, but with the recent release of the eXplorer-III bundle, we thought this would be a good time to have a better look at the synth.

Predator is a three-oscillator synth that comes in VST, AAX and AU, and is a steal at $179. Read on to find out why it’s so great!

As with any plugin, the first thing that will be noticed is the user interface. Rob Papen synthesizers often have some very interesting user interfaces, such as the Blade synthesizer, or the SubBoomBass bass synth. The UI for Predator looks great. It has a professional tone, with classy red highlights and nice black and silver panels. As far as looks go, Rob Papen hit the nail on the head for this synth.

The top of the user interface shows the three oscillators from left to right, followed by the filters. Along the bottom half of the plugin, users will find modulation and pitch controls, envelope controls, effects, and a section called “Play Mode.” Because of the way the synth is laid out, it is rather easy to navigate through it.

At the heart of Predator are the three oscillators, each of which has a huge 128 waveforms to choose from, two of which can be synced. Obviously predator includes the standard sine, saw, triangle and square waves, but on top of that they also include a huge number of variations on these waveforms.

An interesting addition to Predator’s oscillator sections is the “Symmetry” knob, which allows users to “shift a waveforms midpoint.” This is something that many synth players will be familiar with, and being able to change this for each waveform allows users to change the waveforms harmonics and formants.

Users also get a noise generator with each oscillator as well as a sub-oscillator and a “spread” control, allowing users to detune and “multiple oscillate” within one oscillator.

The main filter on Predator offers 6dB, 12dB, 18dB and 24dB low and high-pass options, 12db and 24dB band-pass options, a notch filter, and a comb filter. Predator also has cutoff and Q knobs, and a five-stage envelope generator.

The filter section also includes a filter LFO, pre-filter distortion, and a control for how much the mod wheel can affect the filter.

A second filter can also be found on Predator, which is also a multimode model, but only includes a cutoff knob.

Predator has a number of modulation sources. Apart from the amp envelope and LFO’s, users can also choose “Free Modulation,” which includes two five-stage envelopes and two more LFO’s. All of these sources can be routed to any of the 44 modulation destinations. It’s a little unfortunate that you can’t modulate the waveform selection, but this shouldn’t be too much of a blow for those who know what they’re doing.

The range of effects in Predator is quite large. Beyond simple reverbs and delays that are expected in a synth like this, there are a total of 21 effects. Not only that, but each effect has its own controls. It’s easy to tell that Rob Papen didn’t just add effect sfor the sake of it, as each effect sounds really good.

Predator now ships with what’s called “Predator FX,” which shows up as a separate plugin within your DAW, and allows users to use Predators, filters, vocoder and FX on an audio track. This is a great addition to predator, and could definitely prove to be useful.

It would be accurate to say that at All Things Gear we love Predator. While at the start it’s not the easiest thing ever to use, it makes up for this by sounding great, and being absolutely worth learning how to use. Predator looks great, sounds great, and is worth every penny.