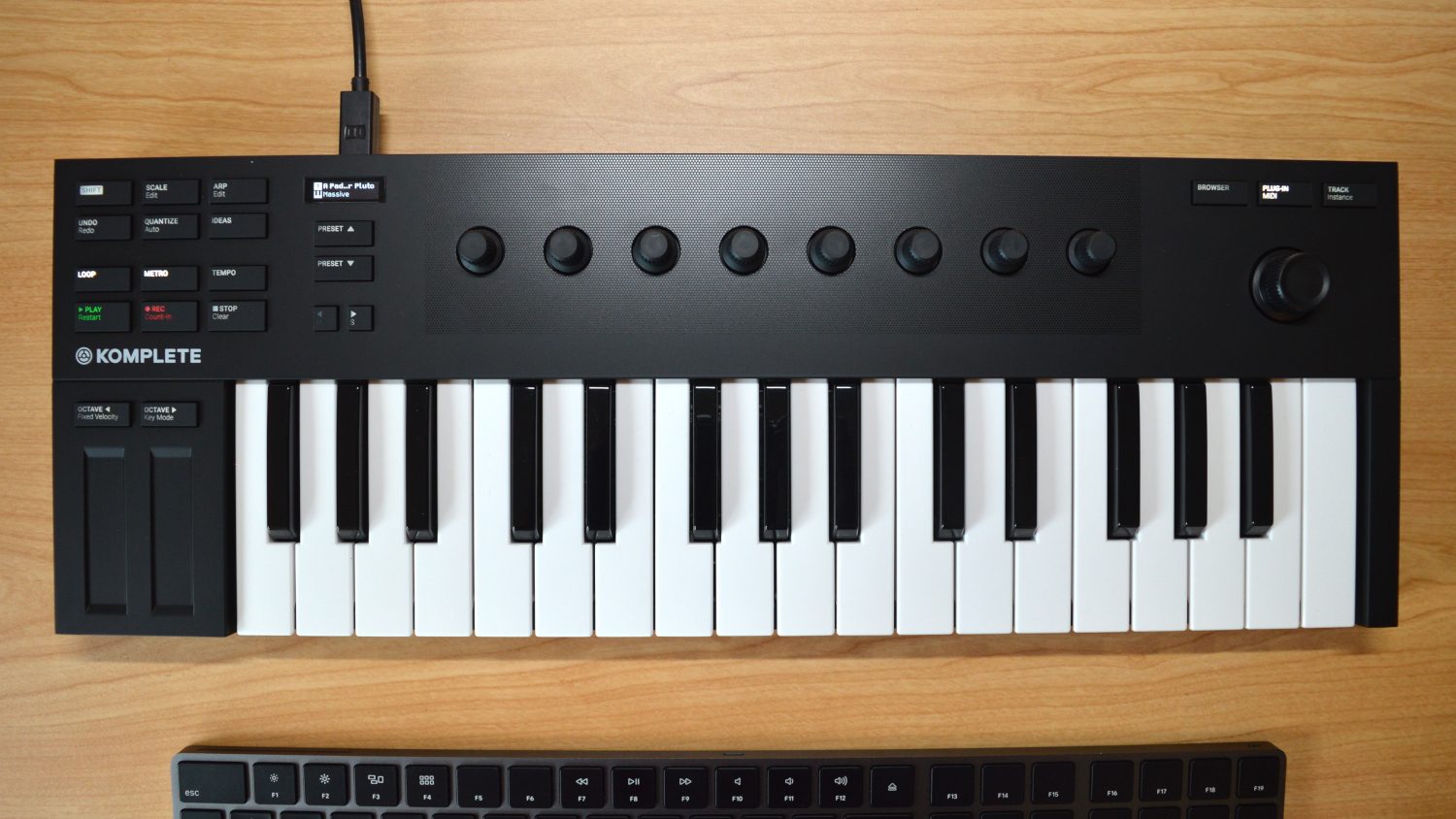 At first glance, the controller looks to be a great option for those that want control of NI’s software in a package that they can take on the road with them. It’s also relatively affordable — the device comes at only $129, making the cost for entry in Native Instruments’ ecosystem even lower.

The first thing you’ll notice about the Komplete Kontrol M32 is that compared to other controllers in its price range, it looks awesome. It’s built from quality materials, is laid out in an easy to understand way, and while not as small as some other “portable” controllers out there, the trade-off is better functionality and larger keys — which is always nice.

Let’s start with the overall layout of the device. On the back, you’ll get a USB port, along with a port for a foot pedal, which is a nice addition. We would have liked to see USB-C instead of the USB-B port that’s included, but that’s not a huge deal.

Of course, the top of the device is where most of the action happens — and there’s a ton of functionality on offer. The device has 32 keys, as the name suggests, and it has replaced pitch and mod wheels with sleek and easy-to-use touch strips. That’s one of the biggest differences between the M32 and its A-series counterpart — but it’s not a change we think many will be frustrated with. There are also eight capacitive knobs and an encoder on across the top, which make it easy to browse and manipulate plugins in Komplete Kontrol, which is the software you’ll primarily use with the Komplete M32.

On the top right, you’ll also get controls for things like quantization, arpeggiation, and transport controls to play and record your ideas. Then, there’s a shift button — which unlocks a whole range of other controls — all at your fingertips. It’s beautifully laid out, and buttons are tactile and clicky, helping make the keyboard in general feel premium, despite the low price tag.

You’ll also get Komplete Start, which is a selection of over 2,000 sound and a whopping 17 instruments and effects — including Carbon, Mikro Prism, Monark, and Reaktor Prism. We’re not going to go through each of them here, but be aware — you’re getting a range of great-sounding instruments with the Komplete Kontrol M32.

The keyboard plays nice with other software too. If you’re planning on using the controller with a third-party DAW, you’ll be able to use it to control your DAW and adjust things like channel volumes, mute and solo, and so on — all straight from the controller itself. It’s a nice touch, and gives the device even more use on your tablet. Of course, that assumes you’re using the right DAW — the feature works with Logic, Garageband, and Ableton Live, so there’s no Pro Tools integration here. That, however, has more to do with Avid’s restrictions than Native Instruments not wanting to support Pro Tools.

Actually using the Native Instruments Komplete Kontrol M32 is an absolute breeze — though there are a few quirks you’ll need to get used to the first time that you use the device. For example, you may want to dive into hardware mapping and MIDI connectivity in your DAW, but that’s to be expected. Not only that, but we found that it works relatively easy.

Using the hardware is generally a good experience too. The keys on the device aren’t as large as some other controllers, but considering the device is built for portability, that’s to be expected. The keys felt generally playable for a controller in this size range, and while this may not be the way to go for a natural-feeling experience, most will be perfectly happy with what’s on offer.

You can get the Native Instruments Komplete Kontrol M32 for yourself using the links below.